Review: ‘The Durham Revue Presents: The North of the Wall’ 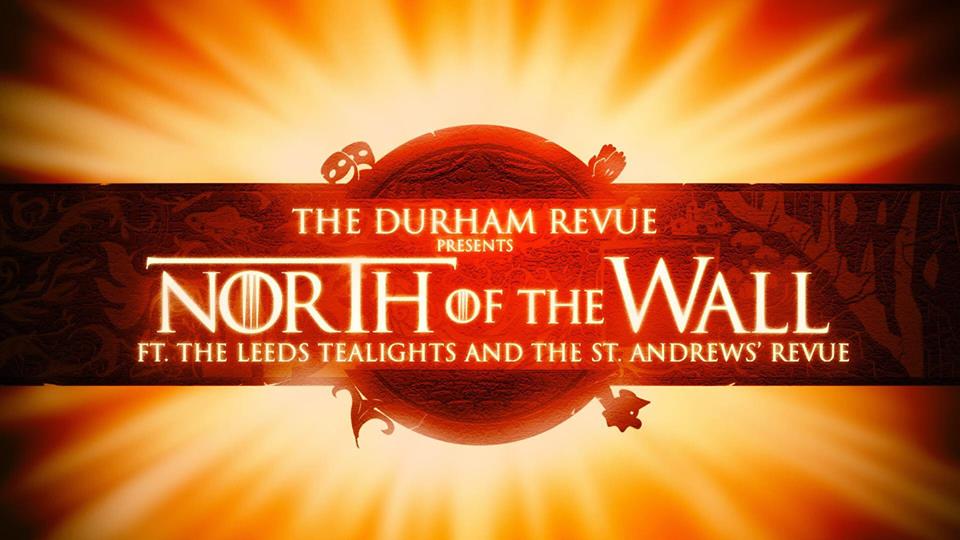 “…each troupe bringing their own unique spin on sketch comedy.”

The Durham Revue’s ‘North of the Wall’ was thoroughly enjoyable, inviting their ‘friends of funny’ The Leeds Tealights and The St Andrew’s Revue to the stage, with each troupe bringing their own unique spin on sketch comedy.

The Leeds Tealights were first to perform, and in keeping with their name, all shone wonderfully bright. The whole cast worked exceedingly well together, each member adding something different to sketches rather than one or a couple of members stealing the spotlight. To select a favourite sketch would be tricky, each being slick, fast paced and consistently hilarious. However, one thing this group excelled at was closing each sketch. Every one had a strong ending, many involving comic twists which added another layer to the main joke, such as the house hunting hermit crab who turned out to be a Scot with a questionable fetish.

The sketches performed didn’t rely on cheap or dragged out jokes, such as silly accents or facial expressions, which they easily could have done. Their opening sketch, involving William the Conqueror’s flaky French army, didn’t rely on the French accents but instead the accents supported and added to the jokes, although they were sometimes difficult to understand. This sketch, like many others, built up nicely. The one liners steadily accumulated, drawing on humour from multiple sources, including classic GCSE French phrases. For this group it seemed to me the words were the aspect used to capture the laughter of the audience, the dialogue being well paced and littered with one liners. Even where a sketch revolved around one main joke, such as the question of whether elephants ever forget, the frame (here, a court case) and the execution of the joke was impeccable. I thought this sketch worked incredibly well and utilised not only the lighting but sound effectively. It could have easily fallen flat but was very clean and took risks which paid off. The Tealights were very polished and definitely on fire.

St. Andrew’s Revue, in contrast to the Tealights, preferred to introduce sketches by breaking the forth wall. This worked well with such a small troupe, their opening introduction being not only very funny but forming a more intimate connection with the audience. Some sketches were somewhat drawn out however and not as slick as they could have been. The first, although funny, was slightly too long and quickly started losing momentum, relying too heavily on the indignation of one character. The pull back ending, although giving the skit a nice twist, could have been more effective with a shorter build up. A particular highlight was that of two crows using a GPS to reach their destination, setting it to ‘as the human drives’ by accident. St. Andrews went further, adding another layer through a narrator dissecting the sketch. They carried their stand-up style of sketch comedy well, contrasting nicely with the other troupes’ styles and seeming more innovative as a whole.

Last but not least, we have The Durham Revue. They maintained an infectiously high level of energy throughout, helped by their dance dependent scene transitions. In places however, excitement got the better of them and sadly some jokes were lost either by members talking over each other or the pace being just a little too quick. In places, the escalation of the scene went hand in hand with that of the cast’s volume, some sketches building to a lot of shouting which lessened jokes’ effectiveness and detracted from the humour of the piece. There were, as always, gems of sketches; typical of the Revue. One of my favourites being a middle-class game-show based on guessing shades of beige, the frame and utilisation of the overhead projector worked very well. Another skit that stood out was the two naughty siblings forced to dance ‘the naughty step’, which I’m hoping will catch on and stop people dabbing. The physicality, as of that throughout, was wonderful and really added to the melodrama. The Revue were incredibly funny, so much so they made even themselves laugh. This corpsing, although endearing, detracted slightly from the sketches, but not from the audience’s enjoyment.

I can now say I’ve done a Durham review, this piece of writing unfortunately the closest I think I’ll get to the actual Revue, but I’ll take the homonym. I can always do a masters if auditions in second and third year don’t work out…