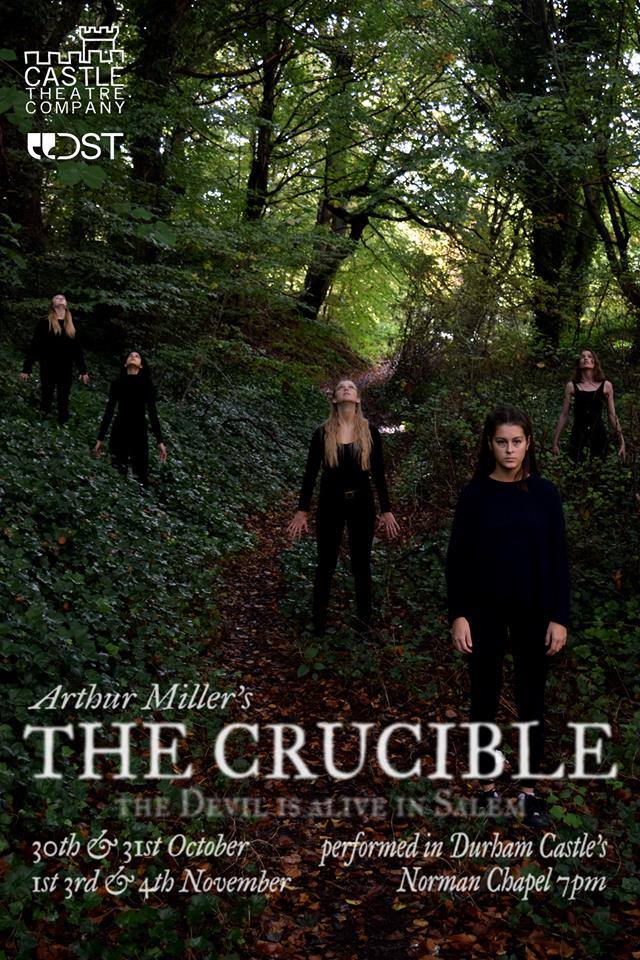 As I entered the ancient, gloomy passageway to the Norman Chapel, I mused upon what it was that I was about to be immersed in. Arthur Miller’s The Crucible has always been a play that I’ve held close to my heart ever since I studied it 5 years ago, and I was concerned that my deep-set preconceptions of how it ‘should be done’ would affect my enjoyment of CTC’s production. I was immensely pleased to see that my doubts were misguided, and that this performance had me enraptured from start to finish.

The simplicity of the whole piece worked to great effect; the subtle reverberating tones and delicate use of choral music echoed off the aging stones of the chapel and made the audience feel as if they were back in time despite having no costume or makeup to indicate this. Unfortunately, whilst the Norman Chapel worked to great effect in this sense, it must be admitted that it really did hinder the performers in terms of space. It was clear that the actors had to be aware of not accidently hitting audience members in the face (an issue I had to physically duck out of numerous times). Even with this heightened awareness, at one point an actor was flung to the floor and collided with myself and the gentleman sat next to me. Actors frequently blocked each other in this set-up, which of course could not be avoided but I did feel it was a great shame, as there were a few poignant moments I wish I could have been able to see. In many ways it was very exhilarating to be so close to the action, but I personally could not understand why the benches the audience were sat on could not have been shifted outwards slightly, as there was a fair amount of space behind the audience, which the actors were using as walkways.

However, most of the cast gave excellent performances; special credit must be given to Theo Holt-Bailey (Reverend Hale) for making a character I had previously found rather dull and irritating into one that grasped my attention with every moment that he was on stage. He gave Hale a dimension that I had never considered before, and actually deeply moved me with his desperate call to the character Elizabeth to help her husband John choose life over pride. Following on from this, actors Ellie Jones (Elizabeth Proctor) and Freddie Parsons (John Proctor) had a beautiful intimacy in their final moments together that really consolidated for me how heart-breaking this play truly is. Their first scene together also convincingly hinted at an unspoken history of marital unrest that felt incredibly realistic. Additionally, there were some minor characters that also shone; Melanie Clarke’s portrayal of Mercy Lewis could have easily been a complete throwaway, but she made the character her own and her unsettling body language utterly fascinated me in the short amount of time that she was on stage. Director Owen Sparkes and his cast should be credited for the eloquent touches that were dotted across the show: moments such as Giles Corey (Alex Colville) frantically muttering prayers under his breath when he is interrogated, or the tragic moan that Francis Nurse (Sebastian Higgins) lets out when he hears that his wife is condemned to death, made for some truly heartrending theatre.

Amongst all these wonderful performances, however, there were a few that could have done with a bit more character-work. For example, I was disappointed in how Owen Sparkes chose to portray Abigail Williams, a character that (for me at least) needs to have a clearly dangerous, almost sociopathic edge. Eleanor Heartland showed that she was a very capable actress but did not capture Abigail’s Machiavellian tendencies, opting for a more vulnerable and frantic characterisation that I personally felt was not true to the script. Furthermore, it did feel in some of the group scenes that the actors would reach a vocal climax too soon and would end up being left with nowhere to go, limiting the development of certain sections. At the end of every act I would feel quite shaken, but the impact could have been even greater if the volume had not hit its peak until its most crucial moment. Three hours of near-constant shouting can be a bit overwhelming, especially in such an enclosed space. Considering that this production had the rare opportunity to be so close to its audience, the director could have easily afforded more quiet intensity in many of the scenes.

Despite these criticisms, I can still say that I thoroughly enjoyed the experience. CTC has reminded me why I love this play so much, and brought to life the visceral nature of mob mentally in a breath-takingly unique way. It is a shame that I cannot encourage readers to go see it, as the production has run its course, but I offer my congratulations to whoever managed to get their hands on a ticket to this thrilling piece of theatre.