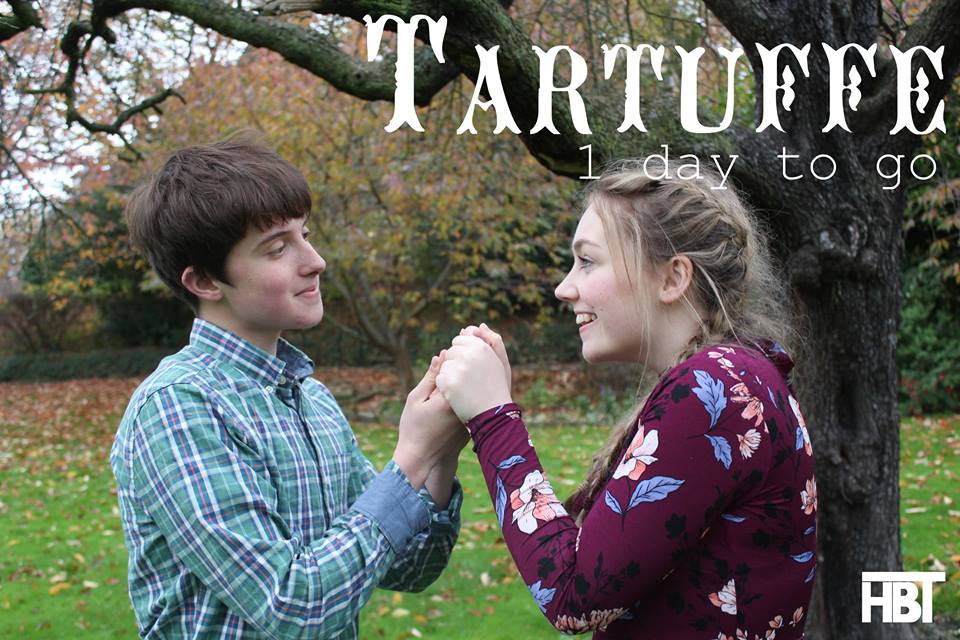 Upon entering Caedmon Hall last night in preparation for the first night of Hild Bede Theatre’s Freshers’ Play, Moliere’s Tartuffe, I was greeted with an interesting staging and a sell out audience, both of which served to pique my interest all the more. Whilst there were a few first night hiccups, and despite the initially distancing language of the script, I was not disappointed and frequently found myself snorting into my into my pint at some (perhaps sometimes unintentionally) brilliant farce.

The idea to have the audience in the round circling a small space on the floor, as well as a beautifully constructed use of the side stage, was well thought through by Director Tania Chakraborti, and commendation must be made for it’s execution. For me the main highlight of this staging was the lack of necessity for any set change as I’m personally not a big fan of scene and set changes. It also added a good contrast between group meeting scenes and smaller, more intimate scenes just through change of level. Whilst the play got off to a good start with the actors taking their places incredibly smoothly some of the initial lines in the first scene were lost due to a lack of diction under the ‘haughty-taughty’ aristocratic accents and being spoken too fast, leaving the audience initially confused at what was going on. This could well be put down to nerves however, as both of these aspects improved as the play progressed.

Indeed, one of my personal favourite moments was when Damis, played with aplomb by Calum Connelly was hiding behind a sofa as he overheard a conversation between his mother and Tartuffe. His boredom and constant engagement with the action was truly a joy to watch. Yet, he should be careful not to gesticulate and bend forward too frequently on his lines.

Another stand out performance was that of Raphael Chinwuko, playing Orgon, who is a ‘conceited and naive father who is caught up in a web of deceit that nearly ruins him completely’, as he puts it in his programme bio. His comedic timing coupled with some stellar facial expressions made for very enjoyable watching, whilst the chemistry between Chinwuko and Izaac Theaker, playing Cleante, worked wonderfully – with my notes simply reading ‘fun pairing’. These two must also be commended for not breaking character when a cue was forgotten and another character took a while to enter, obviously improvising but in a way that was in keeping with the tone and language of the performance.

Furthermore, Kesia Schofield, playing the outspoken maid Dorine, was another actor who oozed with confidence and commanded the stage every time she was on. However, in contrast to this was unfortunately Hannah Stirling who, whilst the naive and sweet nature of her character of Marianne came through brilliantly, had the tendency to often raise the pitch of her voice when upset, rendering some of her lines almost incomprehensible. Yet, it must be notes that Callum Bowler in the role of Tartuffe was wonderfully lecherous and creepy.

The entire cast should bear in mind that, whilst this is a farce, there is such thing as excessive arm flailing and should be careful for the movements not to be too frequent or rigid, though they generally got the intonation of the piece spot on. I would query, however, the choice to leave Rachel Tavaler (as Elmire)’s American accent as it jarred with the overall piece on occasion, I’d also advise reigning back on the coughs in her scene where she exposes Tartuffe. All in all though the piece was wonderfully comedically overacted and the entire cast and crew should be incredibly proud of putting on such a slick show in so little time. It was so nice to see how much all of the actors were enjoying themselves, which is what freshers’ plays should always be about, and I hope to see many of them treading the boards again in future. For anyone wanting a fun, silly evening then do head on down to Hild Bede for a bit of a giggle.