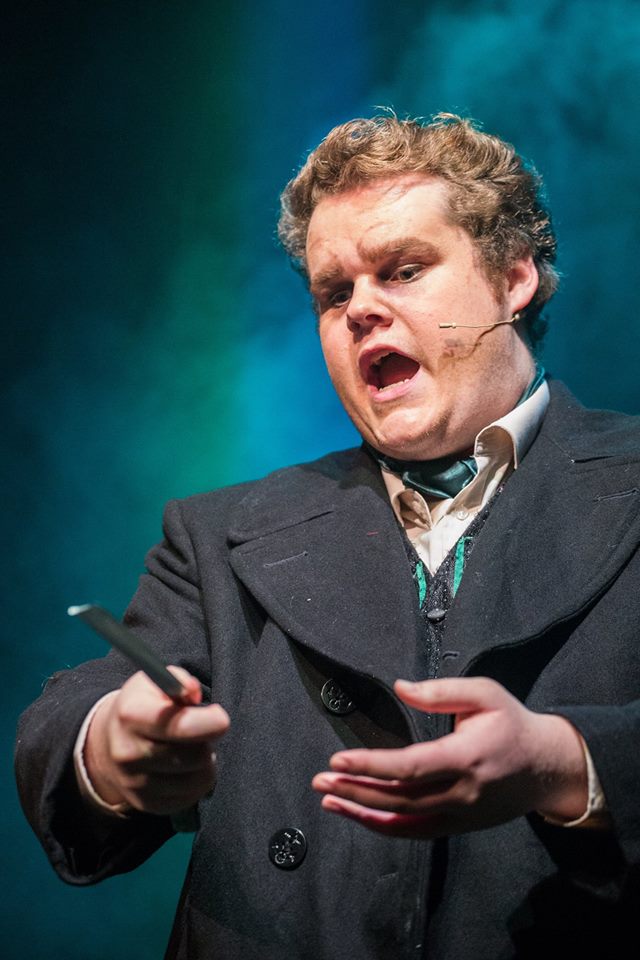 This is how Sondheim’s masterpiece was meant to be done’

Sondheim’s Sweeney Todd is a show that overturns the expectations for a conventional feelgood musical comedy and instead offers something distinctly macabre and savage. This might have presented DULOG with a challenge when the element of crowd-pleasing, lighthearted comedy must be downplayed.

What was presented on the stage on opening night was – and this is not necessarily a negative point – something like a low-budget bloody thriller. There was no sugar-coating of the gore, nor subtleness in the humour; this is, perhaps, how Sondheim’s masterpiece was meant to be done.

There was a good balance of dark comedy and genuinely chilling scenes which made the show both entertaining and emotionally arresting. Of course, the main attraction, Elliot Mather, showed the best of the Demon Barber’s laconic intensity during a mesmerising performance of ‘Pretty Women’ with Charlie Keable as Turpin. The Barber’s unsettling enjoyment in his process of revenge was felt powerfully and made all the more chilling under the pretence of casual conversation. Sophie Forster too, playing Mrs Lovett, hit a terrific balance between endearing naivete and cannibalistic ruthlessness. Her unforgettable performance in ‘By the Sea’ was the absolute peak of the unrestrained comedic side of the show.

The aesthetics of the production also matched the theme of black comedy with colourful costumes – skilfully selected and made by Harriet Billington – against a dark set and dark props (including Mrs Lovett’s pies). The vibrant red ties worn by the characters around their necks were a clever addition to the show’s merging of bright jauntiness and menacing air as the ties remain throughout the performance as an ominous reminder of the Demon Barber’s gruesome undertakings. With the mix of vibrant costumes and sinister lyrics, the production offers a chorus of frightening caricatures which make the show all the more sinisterly entertaining. It should also be mentioned that Pirelli, colourfully played by Joe McWilliam, wins best costume.

With only around 20% of the show being spoken, it is fortunate that the forte of the show was indeed in the musical elements. The singing was meticulous, the cast impressively pulling off the incredibly complex rhythms and angular harmonies. While some others struggled, Jasper Millard as Tobias showed outstanding skill in the clarity of his diction when delivering some impossibly rapid speech rhythms in the songs. Florence Russell’s rendition of ‘Green Finch and Linnet Bird’ must also be commended for a chilling capturing of a sweetness amidst the sinister world Johanna inhabits. The musicians, who were placed visibly on the stage as a ghostly orchestra, consistently played with a sprightly but intense touch to help maintain the sombre-comic air of the show.

Sweeney Todd is undoubtedly an exhausting show to put on, and it is inevitable that the energy levels of the cast should drop at times. Not all of the lyrics could be perfectly heard, and not all of the action was sufficiently affecting. However, impressively for an opening night performance, the lines were all delivered extraordinarily smoothly and the confidence of the actors was consistently strong. Overall, hard work over the last few weeks of the director Qasim Salam, and the cast and crew was hugely evident, and North Bailey was ringing with enthusiastic praising at the end of the night.