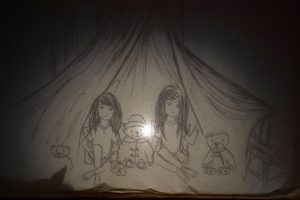 Survivor follows two prisoners in a totalitarian dystopia, but it makes you question your own life and how much you would endure in order to survive. This was a brave undertaking for Adam Simpson and he should be praised for producing Buttered Toast’s first full length production. It was refreshing to see high quality student writing outside of DDF and I look forward to seeing much more original theatre in the future.

Firstly, the artistic team, led Adam Simpson and Shanaz Alia-Ford, should be praised for producing such an aesthetically sound production. The clean lines and sterile lighting created a suitably clinical and dystopian atmosphere and the sunken stage, despite causing some issues with sightlines, prompted a sense of entrapment. The presentation of this production and creating a convincing futuristic setting was paramount to its success and, thankfully, the team pulled this off brilliantly.

The visual production value was so convincing, however, that Simpson did not need to make so many explicit references to the totalitarian state within his script. The subtle references to ‘The Academy’ and the trials were more than enough to convey to the audience the setting, and at times it felt as if we were being repeatedly spoon-fed this idea; cliché references to the banning of television and songs made it feel like I was watching scenes for We Will Rock You rather than the psychological thriller that Survivor has the promise to be. Simpson is so close to hitting the horrific shock value he is evidently aiming for, but I would urge him to refrain from dictating to his audience to allow his impressive theatrical concept to speak for itself. 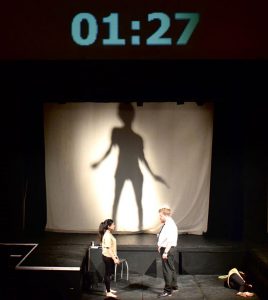 While parts of the production felt rather slow and repetitive, there were moments of innovative staging that re-grasped the audience’s attention. The use of live drawing on the cyclorama was a brilliant and refreshing medium that engaged the audience during a considerably lengthy monologue, and Simpson and Alia-Ford, again, should be praised for this excellent artistic vision. It was these moments that combatted the somewhat static pace of the production.

However, I feel this pacing issue could be easily overcome. While Charlie Keable as the guard was convincingly threatening and domineering, his intonation became rather repetitive and lost impact. He is evidently a very strong actor, and I would urge him to become more subtle and humanly accessible during the more tender scenes with his prisoners to contrast from his cold and militant guard role. However, his relationship with Layla Chowdury and Sarah Macmillian, as the prisoners, was excellently conveyed. The girls successfully depicted their horror and fear over his manipulation and power and their moral struggles were clear to the audience.

Survivor is an impressive piece of student writing, it was a thoroughly entertaining and thought-provoking production. I would strongly urge Simpson to continue developing his work, and I look forward to many more student written productions to be seen in the future. 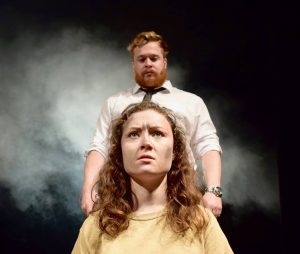 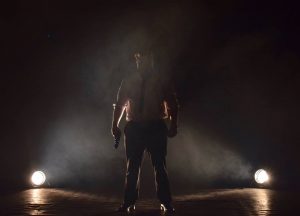