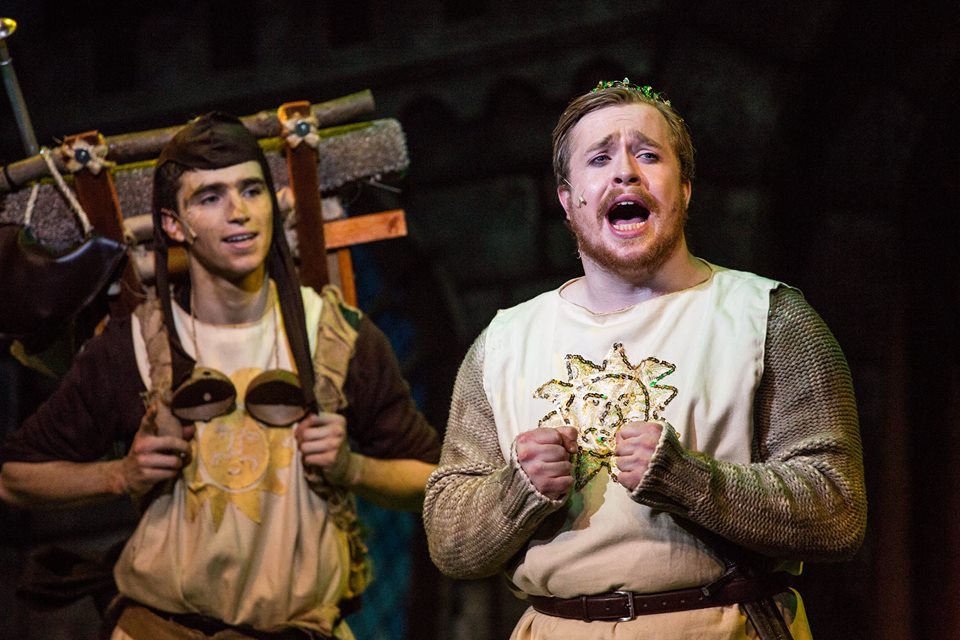 DULOG’s Spamalot tells the story of the quest for the Holy Grail, playing on the classic Monty Python. Containing a wealth of well-loved jokes and songs, the production was a highly entertaining evening of theatre, leaving the audience in genuine, belly laughter.

What stood out most within this production was its professionalism. The energy of the cast did not waver, executing every line and movement with flawless characterisation and purpose. The reciprocal respect between the production team and cast was evident, with the cast doing full justice to Elliot-Ripley’s outstanding direction and the production team showcasing their cast’s strengths. The entire team should be praised for this ensemble effort as they have created something truly heart-warming in their obvious enjoyment of the production.

Much of this professionalism stemmed from the impressive design elements of the production. The work of producers Gen Burns and Alice Clarke should not go unnoticed for their ability to create a thoroughly Monty Python-esque onstage vision. In this light, the work of Costume Designer, Caroline Mosimann, was exceptional. With costume changes necessary for almost every ensemble scene, her ability to source costumes of such good quality and relevance is truly admirable and really set off the entire production. The lighting design was also an understated brilliance and the Technical Team, led by Michael Nower and Peter Noble, truly enhanced the production. One stand out moment was the use of spotlight when Arthur retells the story of Excalibur that created great comic effect for its dramatic snaps back into the wash of reality as the oblivious knights shrug off its relevance.

While it is impossible to praise the entire cast individually for their performances, there was some outstanding work. The partnership between Charlie Keable (King Arthur) and George Rexstrew (Patsy- the noble steed) was most enjoyable to watch. Keable’s arrogance and pride in contrast to the vacant caricature of Rexstrew’s character provided moments of great comedy as well as humble friendship. In particular, their rendition of the classic ‘Always Look on the Bright Side of Life’ was a true delight to watch. Rosie Weston (Lady of the Lake) was also exceptional in her ability to act through song. She provided moments of unassuming hilarity through her demure demeanour, but shocked us all with her impressively flexible vocal range. While I did think the improvised riffs lost their comedic value when repeated across different songs, her performance of ‘Whatever Happened to My Part?’ was highly entertaining and she should be praised for maintaining the air of nonchalance while the audience were in fits of laughter. Seb Higgins as Historian also introduced the musical with an intense and engaging energy that set the tone for the entire production and Rory McNeilage (Not Dead Fred) and Luke Backlock (Sir Bors), despite their comparatively smaller roles, delivered memorable comedic performances.

I must make special note of the choreography; an intensely dance heavy production, choreographers Sophie Allen and Laura Doherty should be highly praised. The standard of the choreography was exceptional, offering a diverse range of dance forms ranging from Lyrical to Disco. However, I feel the high standard of choreography was, at times, let down somewhat by the execution from the ensemble. While simple whole cast choreography was extremely effective and clean, some of the dance ensemble evidently struggled with the technical demands of the more challenging numbers. Spacing also proved an issue at times, with the cast performing largely off-centre and seeming to have a fear of stage right. This led to some uncomfortable issues with turning and limited line extensions considerably. This is a minor issue, but I would urge the whole cast to embrace the space of the Gala stage as this would improve the standard of the dance numbers and justly showcase the standard of choreography. However, I feel Will Emery must be praised for his dance performance. He was technically sound throughout with his articulation really showcasing his obvious talent, he was an understated, standout performer.

The sound landscape across the entire production was most impressive and the true, unsung heroes were the band. From their Overture onwards, their rich performance gave me goosebumps and I cannot fault their musical performance. At times, there were slight issues with hearing the actors above the music, however I am aware this is due to the technical issues with microphones that were evidently a teething first night problem. This can easily be resolved for future performances.

DULOG’s production of Spamalot was a thoroughly entertaining and enjoyable evening of comedy. I cannot stress the professionalism of this production and I would urge anyone to go and see it if they want a mid-January pick me up. Spamalot is clearly loved by both audience and cast alike. There are moments of sheer hilarity and absurdities and it will undoubtedly leave you with a smile on your face.