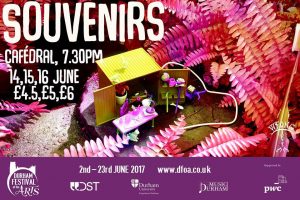 After CTC’s The Wasp last term, Cafedral seems to be becoming a more and more popular venue for DST productions. That said, its quirky, kitsch atmosphere provided the perfect backdrop for Wrong Tree Theatre’s newest venture Souvenirs, a show that I can only really describe as perfectly choreographed chaos.

Right from the off, the cast of five were working together as a strong ensemble, with each playing multiple roles, as well as supporting the action with the use of props and physical theatre. Although in a piece like this it is difficult to point out any standout performances, especially with such a strong and entertaining cast, I must admit that Fionna Monk-Plaut as Terence the cat constantly had me in stitches, with a wonderfully dry sense of humour and simply gorgeous use of her hand puppet. Yet it was the group work that really stood out to me, as the cast transformed from plants to Charlie Chaplin-esque silent movie stars to tourists, using every medium at their disposal. Despite some slightly dodgy West Country accents (although coming from the West Country myself, I could just be being picky), the cast’s physicality onstage truly evoked the claustrophobic feeling of the pub they were portraying without anything remotely naturalistic to back them up. I was hugely impressed by their commitment and versatility.

The cast also took several opportunities to interact with the audience. This was very humorous and in keeping with the style of the piece; however, it was sporadic and this did make it feel a little gimmicky at times. The moments of interaction were lovely and I would encourage the ensemble to build on them. Again, interaction was slightly limited by the capabilities of the venue and there were several instances in which I felt that the show might have benefited from a larger venue.

That said, the real beauty of Souvenirs comes from its use of props. Even as the cast dressed the stage for the opening scene, they transformed mundane, everyday objects into birds and animals, even creating for them individual personalities. Despite a few first night teething issues, with the cast sometimes seeming unsure as to the timing of entrances, and their synchronised actions occasionally out of time, it is the playful energy of this piece that makes it such a joy to watch; Jazzy Price and her team should be very proud.