Shaheen Ahmed-Chowdhury in Drama on 19 February, 2016. 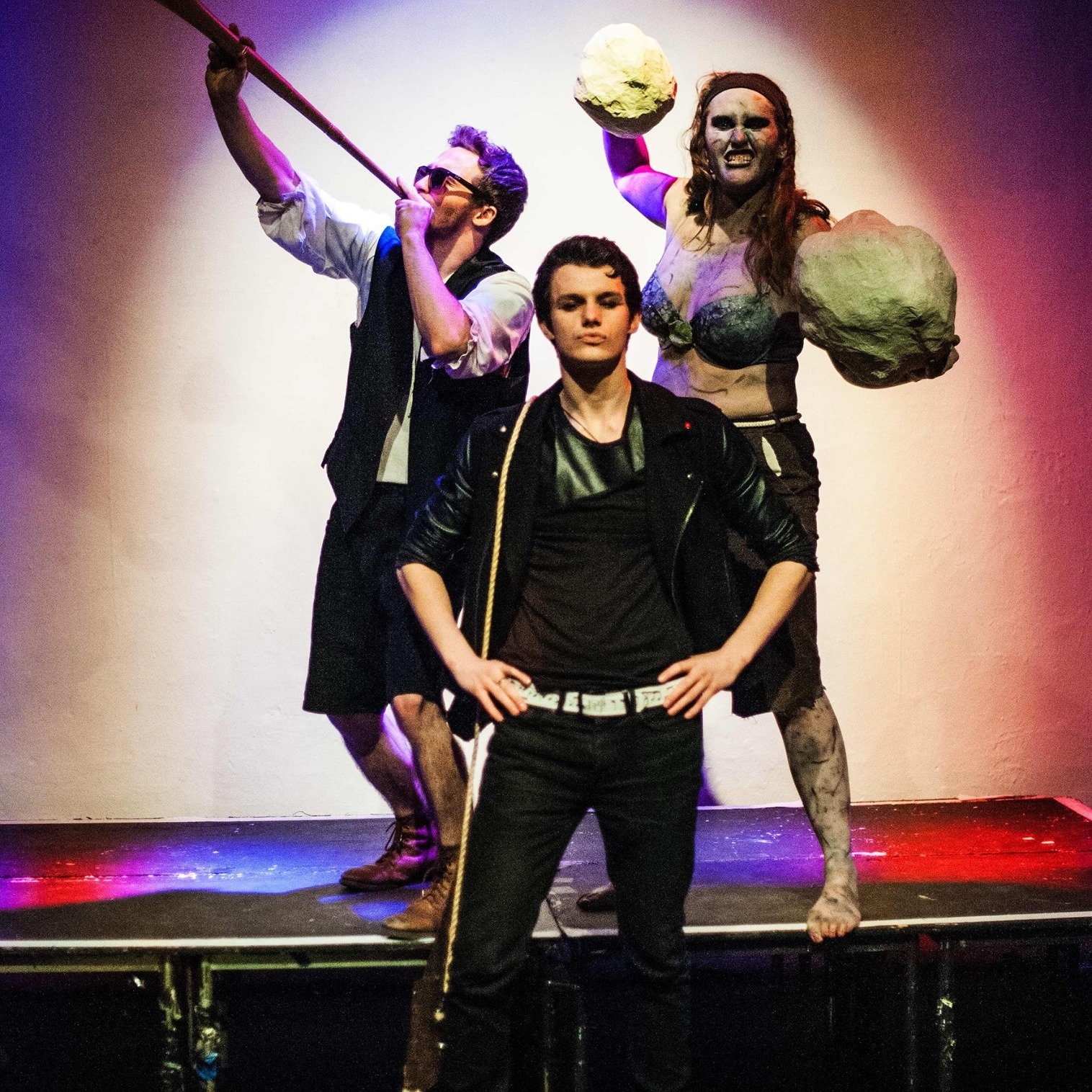 Ooook! Productions’ annual Terry Pratchett adaptation is something that I’ve somehow managed to miss in my 3 years at Durham. This year, they have chosen to take on Soul Music, first published in 1994. It’s a delightful tale that follows Imp Y Celyn (Adam Simpson), or Buddy, on his quest to find musical fame in the fabled town of Ankh-Morpok. Tagging along with him are Cliff (Kitty Briggs) and Glod (Wilf Wort), a downtrodden Troll and an incredibly charismatic Dwarf, respectively. Meanwhile, Death (Laurence Stanley) has gone missing after experiencing an existential crisis and his granddaughter Susan (Freddie Drewer) finds herself flung into the hole he has left behind. Various other side plots come at you from every angle over the course of the show.

Having not a read a single page of Soul Music — or any of Pratchett’s work for that matter — I went into the show completely blind, and I was very pleasantly surprised. Let’s start with the props and set: so much of the charm of this production came from the evidently self-crafted plethora of signs, backgrounds and accessories. By not concerning themselves with having the most amazing set in the world, the audience are placed in the mindset of not taking this production with the utmost seriousness. That in itself allowed the audience to accept the humour offered up by the stellar comedic timing of much of the cast, and my God was it stellar at times.

The depth in the quality of the cast also took me by surprise. I haven’t seen much of Ooook!’s work, but not many companies in Durham can reliably get such a high-quality cast of over 20 students. I mentioned the side plots earlier, and it was here where the audience experienced many of the titillating comedic delights. This came from the likes of a pair of dumbfounded and amnesic Legionaries, and even a trio of plucky yet useless Wizards (Uday Duggal, Alex Hall and Ben Butterworth) just wanting to play “great music with rocks in it”. Once the actors had established their comedic talents, they went from strength to strength in the second act, timing one-liners to absolute perfection at times. Katie O’Toole and Sam Humphriss especially must be commended for their brilliant opening scene with Death, during which they had the audience in fits of laughter. These two — as well as much of the cast — elicited many of the genuine laugh-out-loud moments.

Simpson’s portrayal of Buddy was great, although it’s hard to say much about it, given that there wasn’t much depth to the character itself. At the start he was plucky and endearing, moving more towards moody as the play progressed before perking up by the end. Simpson seemed hardly challenged with the role. In fact, the more challenging parts perhaps fell to Dewer, Briggs and Wort.

Dewer’s character was perhaps the most developed and realistic, and as a result easily the hardest to play. Dewer was close to pulling this off, but a tendency to repeat intonations, and a struggle to convey the deeper aspects of the emotions her character experiences held her performance back a little. Briggs and Wort however, were fantastic in general. Briggs in particular must be commended for her absolute commitment to playing a Troll. She was consistent in her characterisation, and along with Wort, framed Simpson brilliantly. Wort also worked hard to draw laughs out of the audience and generally pulled it off with aplomb. His portrayal of a Dwarf was completely caricatured and over the top, yet so wonderfully exuberant. Only occasionally did he and Briggs under- or overact at points when it wasn’t necessary.

Lighting effects were also used generously, and there were some incredibly intelligent effects used to portray explosions and invisibility — some of which I would have never previously considered. The start of the second act, however, was oddly bland. Having the first five minutes in a plain wash jarred with the excellently dense and thick lighting techniques used throughout the rest of the play.

Overall, this show really surprised me. The depth of talent in cast, consistent and clever use of lighting, delightfully self-crafted props, and just the sheer comedic quality meant that I didn’t mind sitting in The Assembly Rooms Theatre for over 3 hours. I mean, where else amongst all the shows that DST has put on this year would you find Trolls in bras, Death drinking his woes away and lumps of wood painted as cheese being thrown from the flies? Nowhere but in Ooook!’s Soul Music.