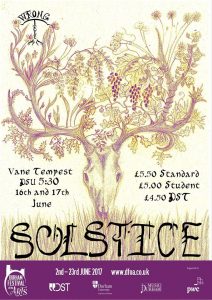 Wrong Tree’s ‘Solstice’ is one of the most exciting pieces of theatre I have seen in Durham. Based on a short story by Jake Hathaway, with an original score led by George Proctor and Henry Fell’s strong team of devisers, it is purely student written. Yet it is powerfully strong and professional and I would urge everyone to see this production to show what devised theatre should look like.

Perhaps the greatest strength of this production was its overall vision; the consistency of this vision emanated through the entire production and I was constantly reassured that every moment in the production was purposeful and central to the plot, a necessity in any devised theatre. The cultish themes of the production were complimented greatly by the immense talents of the band, the singing and the hugely impressive costumes, hair and make-up. The entire team should be highly praised for this consistency and clarity of vision, as such unity is difficult to achieve with such a large pool of contributors, but Wrong Tree pulled this off exceptionally.

Having said that, there were moments where I felt this integration faltered somewhat. The band is a significant contributor to the success of the production, yet I felt they were somewhat distant at times. Although they were slightly acknowledged by Athena Tzallas during her story and they came on stage, I felt that their purpose was merely to underscore the production and this left me feeling somewhat disheartened. I feel this could be resolved easily by placing them at the back of the stage, constantly in sight to suggest they are members of the society, as music is evidently a strong presence in the culture presented. There were times when this was achieved, such as Anais Dahl’s demand to ‘let the festivities begin’, and the introduction of the music was seamless and fitting to the events. I would strongly encourage the team to work on this integration to smooth out the slight moments of disjunction.

However these moments were few and far between and were constantly outshone by the innovative work of the ensemble. In particular, the presentation of the stag was extremely impressive. Led by Dahl’s powerful posture and followed by Gould and Tzallas’ more primitive grunting, it was refreshing to see such a beautiful animal presented so clearly and believably by the actors. Moreover, the use of body percussion was a true joy to watch, and was one of the most exciting and inventive pieces of theatre I’ve seen, and was concluded excellently by the band. It was such moments that made this production truly memorable and I feel any theatre practitioner could be inspired by Fell’s work. His skills in utilising the ensemble are impressive and ensured that no actor outshone another, despite each of their outstanding talents.

What is more impressive, however, is that the production concluded with company President Helen Fitzmaurice announcing that one of their cast members was unable to perform due to injury, resulting in re-blocking the entire production in two days, yet this was unnoticeable. Thus, to achieve a production of such professionalism and innovation with such a tumultuous rehearsal period is truly admirable and each member of the cast an creative team should be greatly praised for their success. I would strongly encourage everyone to see this outstanding production.