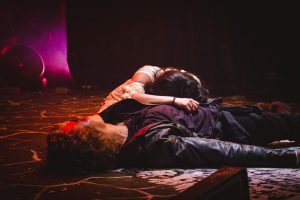 400 years later, and Shakespeare continues to be performed. Therefore, it is no surprise that Kitty Briggs tried to look for ways to shake it up a bit. Complete with LEDs, contemporary dance and leather jackets, Briggs’ post-apocalyptic production is a far cry from the 1600s. However, I sadly feel this transposition may have been slightly too ambitious.

Briggs and her team should be praised for their conviction to the unusual setting; the production aesthetic was most impressive, with an inventive and relevant set design and equally effective costume design by Jemima Bunbury. However, the use of the apocalypse seemed to lack strong justification and was somewhat discordant to the major themes of the play. Centred on love, the evidently barren apocalyptic landscape seemed a jarring backdrop for the romance, and while this disillusionment had the potential to intensify the human passions between Romeo (Harry Twining) and Juliet (Layla Chowdhury), this failed to be translated.

It was this lack of love and chemistry that was most disappointing for me. Twining and Chowdhury are evidently extremely competent actors and demonstrated a firm understanding of the text, however I was never fully convinced of their love for each other. I was more moved by Twining’s touching reaction to Mercutio’s (Zac Tiplady) death than his suicide following Juliet’s feigned death and sadly, I attribute this lack of chemistry to the sassy portrayal of Juliet. While Chowdhury’s performance was refreshing, vibrant and, at times, wonderfully comedic, I felt it to be inappropriate for the role of Juliet; I feel it channelled too much Beatrice and not enough Ophelia. I simply did not believe that a woman as fiercely independent as Chowdhury’s Juliet would give her life up for a man and this caused significant issues throughout the production.

Moreover, I felt the use of dance and music also weakened this chemistry. While choreographer, Carrie Gaunt, achieved some moving moments, these resided purely in the more abstract movements such as Juliet’s awakening, yet when these moments became full scale dance routines complete with isolations, pirouettes and lifts, impact was lost considerably. I recognise and respect the bold choices made by Briggs and Gaunt and I am a firm advocate of dance within drama, however, I feel for dance to be successful within plays, it must move away from its formal, technical restrictions and focus solely on characters and their relationships in an abstracted style. 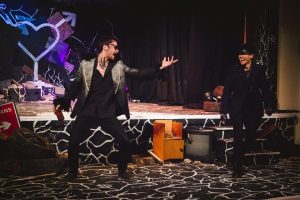 However, the production offered many enjoyable moments. Katherine Briggs delivered a humble, loveable portrayal of the Nurse and Flo Petrie as Capulet gave the production great authority as she demonstrated impressive skill in verse. However, it was Zac Tiplady’s performance of Mercutio that was the undoubted highlight of the evening. Wonderfully comic, energetic and likeable, with a firm grasp of Shakespearean language, he executed the role faultlessly and was a true joy to watch. Yet, what was most impressive was the naturalism he maintained; he did not force meaning through exaggerated, melodramatic expression or body language, but allowed the words to do the work- a note I feel many of the actors could also benefit from as there was a tendency to over-act to force meaning upon the audience. However, the acting was generally strong and they, and the production team, should be praised for their commitment in such a stressful time of year.

PTC’s production of Romeo and Juliet, therefore, was a bold and ambitious move from Briggs, yet sadly, it just missed the mark. While it clearly had a strong team behind it, and there were moments of excellence, I felt that the risk did not quite pay off. However, the sheer commitment and determination of each of the company was evident and they should be proud of pulling of such a large scale production with exams right round the corner.