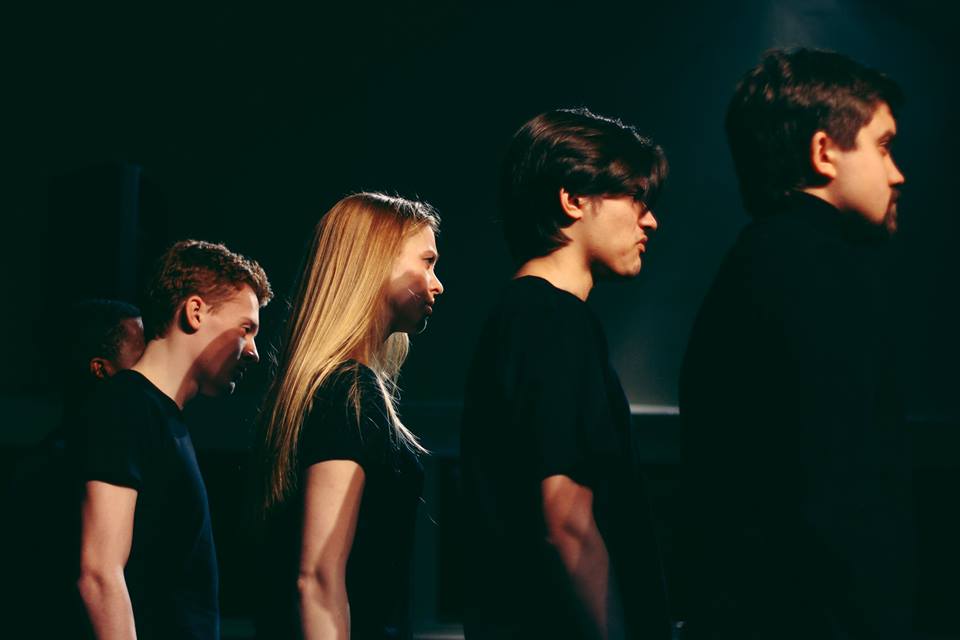 ‘Mastromas has the tools to achieve more’

Castle Theatre Company’s production of The Ritual Slaughter of Gorge Mastromas offers its audience very little information about what to expect from the show as they enter the auditorium; the set was minimal, and the publicity has been unrevealing. Having experienced the three-hour-long finished article, I can only say that I can very much see why this was the case. Indeed, the term “finished article” seems inappropriate, as it is this reviewer’s opinion that the team behind Mastromas would perhaps have wished for more time to devote to making this show what it could have been.

The show began as the cast of seven entered and sat on the stage, narrating the story of the formative years of the eponymous Gorge [sic]. Throughout this opening scene movement was minimal, and the cast carried the first half hour with effective characterisation, good coming timing and interplay, and generally capable control of the audience’s attention, allowing the quality of both the dialogue, and the dynamic developed between themselves, to do the work.

The backdrop to this effectively characterised opening was, however, an extremely characterless set. A temperamental projector didn’t help, but equally the decision to leave it right in the centre of the stage seemed either lazy or, simply odd. It seemed frequently in the way of actors throughout the performance, and generally distracted. The doors placed on either side of the stage were an effective way of containing the overly deep Assembly Rooms stage and allowing the actors a more appropriate space in which to perform.

However, this was undermined by the fact that the worker lights were left on backstage for much of the first half, and the tabs were completely ignored in such a way that from where I was sat I could see directly into the back passage behind the stage. Whenever actors moved behind, they were immediately exposed while out of character, and were even open and unconcealed arranging props in the interval. Lastly, a word should be said about the transitions: these dragged, seemed unplanned and, in one instance that saw a single cast member drag on a large armchair (perhaps unnecessarily for the scene, one might add), they were comical to a degree that seemed almost intentional.

It is not ideal to have to dwell on details such as this, but they were noticeable to the extent that it detracted from the show, and this must be observed. When undertaking a show of the length of Mastromas, details such as this are critical, for as the play goes on, greater and more strenuous demands are placed on the audience. It seems that the set simply hasn’t had the attention that other parts of the show seem to, but these issues must be overcome before the show can be taken to any higher level.

Theo Holt-Bailey offered good stage presence and delivery as the lead Gorge, always comfortable and commanding in the space, and nuancing his character well with meticulous physicality. More differentiation could have been made between the various stages of Gorge, though this is potentially a criticism of the structure of the play than anything else. The progression from good-willed businessman to merciless tycoon is crippled by leaping transitions between long, very separate scenes each years apart, each in turn crippled by the lack of subtlety or smoothness in the changing of what was not even very elaborate set; while Holt-Bailey coped well in embodying the initial development of Gorge’s selfishness, but one felt more could be done to present the later aging and descent into selfishness.

In terms of the chorus, Sarah Cameron stood out as Gorge’s manipulated love interest, with superb stage presence and comic timing in her first scene especially. Her delivery was crisp and entertaining; Cameron could afford to pay additional attention to her character’s more vulnerable moments. Ella Blaxill also impressed, standing out especially in the chorus scenes with excellent vocal and facial expression. Blaxill paced her lines superbly in her scene as the cutthroat Mephistophelian businesswoman, but needs to be aware of her blocking and movement. By planting herself more solidly and shuffling less, as well as generally moving more slowly and deliberately, she could achieve a greater sense of authority and threat to better suit the character.

While all the chorus had their moments of quality, they began to trip over one another and lose a degree of rhythm in the second half. Lines seemed shoddier and cues from time to time seemed off. What became apparent overall was that the natural talent of some of the actors papered over the cracks of what was essentially an underprepared production; Mastromas would have seemed every bit of the three hours it was with a weaker cast, if not longer, and the production seemed in every respect a victim of its own ambition. With the exception of the slicker opening half-hour, many of the interactions between cast members seemed dissonant, as if not sufficiently rehearsed to know what fully to expect from one another. The general effect was one of two actors reading lines to each other, rather than an immersive connection with the characters, and leaving the climaxes of several scenes fell rather lamely.

I must caveat these criticisms with what I consider inherent limitations of the play’s structure and length. I found the play loses itself in a quagmire of attempting to modernise the morality play concept, only to fail to do so successfully. I found myself neither caring about Gorge or his fate, nor feeling complicit enough in his rise to be invested in the outcome. The introduction of Gorge’s hitherto unmentioned grandson, played by Kishore Thiagarajan-Walker (an example of a scene where the actors did not seem to gel at all), had no emotional weight behind it and left the play ending on a rather flat note.

Not wanting to do the same in the impression I give of Mastromas, I would prefer to commend Owen Sparkes and his team for handling a play of this magnitude at this time of year; practically speaking, it is difficult to accomplish a fluid production at this stage in the academic calendar, especially one of this length. On the whole, the show could have done with a week extra to fully nail down the potential of the cast and the themes explored within. With greater attention to detail and better consciousness of demands of the space and set (and perhaps even, if I profane with this unworthiest keyboard, a little cutting of the script?), Mastromas has the tools to achieve more. I hope some of the issues can be ironed out for the rest of the run, and that the quality of some of the acting on show gets the attention it deserves.