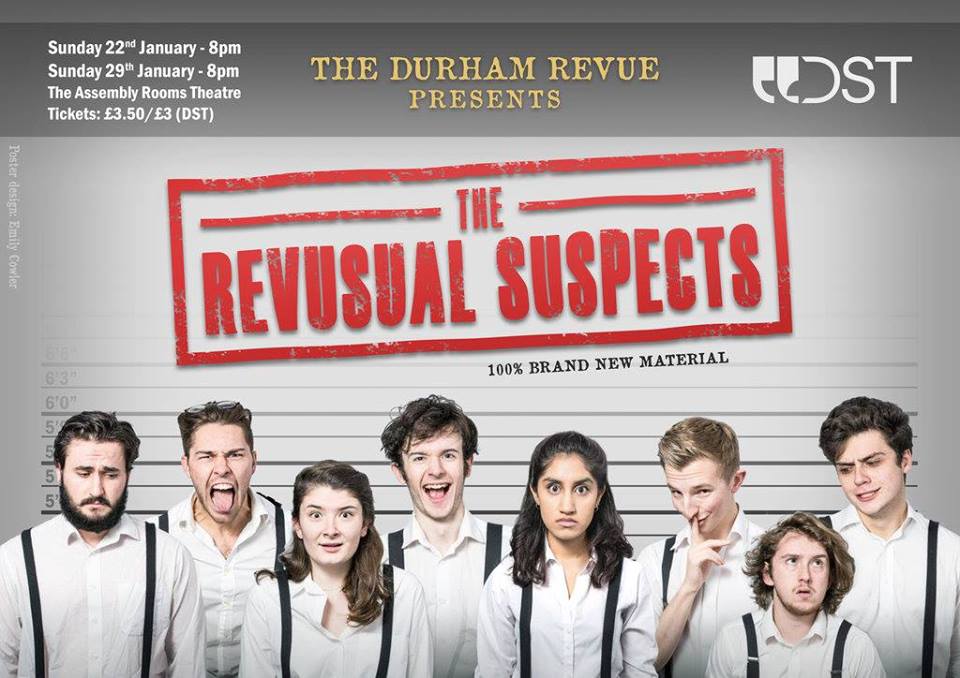 Right from the word go, The Durham Revue’s new show, ‘The Revusual Suspects’ was a sight for sore eyes. After a slightly cringe-worthy start of ‘Are you ready for some sketch comedy?’ from Ambika Mod, the energy levels were ramped up to the maximum, as each member of the troupe ran up onto the stage, popping out from different areas of the audience. The Durham Revue, introducing two new members, Broccan Tyzack-Carlin and Lily Edwards to their 2016/17 troupe, once again did not fail to disappoint.

The show kicked off with fast paced sketches, each met by raucous laughter from the packed Assembly Rooms audience. The fact that the show was completely sold out is certainly testament to the popularity of the Revue and the high quality of their comedy. The material felt fresh and exciting, all neatly strung together with slick changes between sketches and upbeat music to keep the audience animated. The overarching storyline of the troupe being locked up in prison for crimes against comedy was one that entertained throughout, giving the sketches an amusing context which added to the cohesive nature of the performance. This idea of imprisonment was revisited and further developed through different sketches later on in the show, such as in the ‘Interview’ and ‘Great Escape’ sketches. Each scene was perfectly executed, the lively atmosphere clearly showing how happy and comfortable each member felt up on the stage, a sentiment which really came across to the audience.

The standout performer of the night in my opinion was Andrew Shires. From his impersonation of the iceberg in the Titanic, to his shameless ‘audience member’ character in the ‘Improvised Comedy’ sketch, his hilarious facial expressions and strong characterisation in each different sketch constantly made the audience laugh to the point where their bellies were aching. Special mention must be given to Broccan Tyzack-Carlin for his impressive accent work and to Lily for her hysterical portrayal of trying to convey her feelings through song.

The variety of sketches must be commended, from the seemingly relatable dystopian radio adverts, cleverly voiceovered by Ambika Mod and the spoof documentary-esque sketch on thumb wars portrayed by Tristan Robinson and Mike Bedigan, to the more abstract sketch about dying within seven days of watching a certain film and the sketch about the Bag for Life. There truly was something for everyone.

My only minor criticism would be that at some points, the timing and execution of voiceovers was a little messy or not completely in sync with the actors on the stage. For example, during the ‘Wimbledon’ sketch between Luke Maskell and Mike Bedigan, the voiceover felt slightly rushed and the speaker at times stumbled over their words. However this is only a very small hiccough in what is otherwise an incredibly well rounded, hilarious show.

Every member should be applauded for their boundless energy, comedic genius and amazing acting talents. To juggle all this is no small feat but the Revue pulled it off with charisma and an undeniable personal connection to the material used. This troupe have an incredible amount of potential and I can’t wait to see what they come up with next.