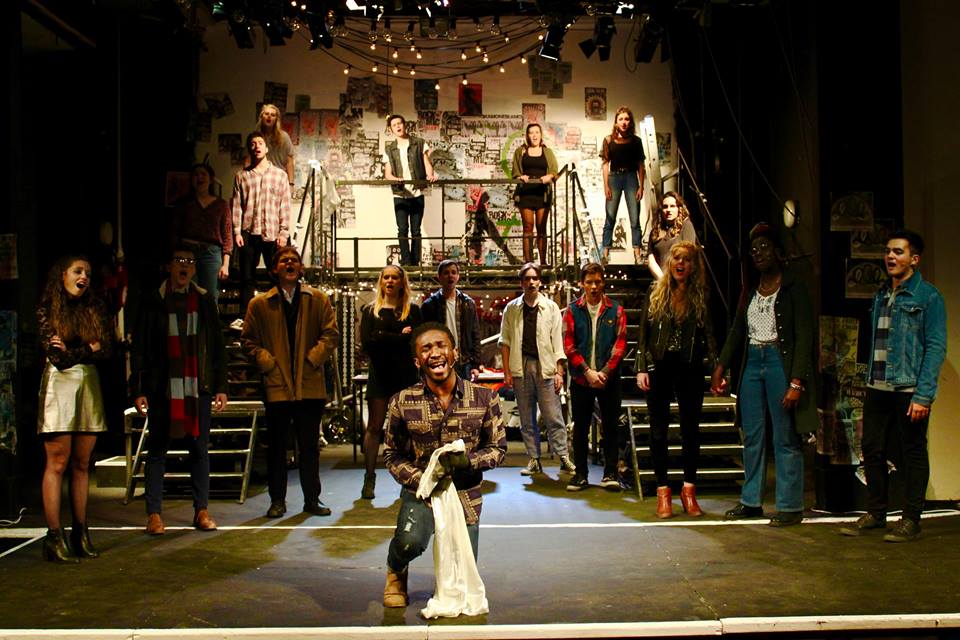 “…the whole cast were excellent in their respective roles.”

Rent is a musical that tackles the challenging issues of depression, poverty and AIDS in the context of New York City in 1989. Here, the sensitive issues are tackled very well by DULOG in what was a moving, enjoyable and impactful production of the classic Broadway play.

The scene of modern day East Village, New York was well set through the peeling posters and the bold graffiti on stage. Adorned with fairy lights, the stage effectively reminds you of the Christmas season in which the play begins and ends in, helping to transport you to the world that the musical portrays. At points, the smoke machines were used a little too generously which did have the effect of swallowing the front rows, however this did not take away from how effective the set was.

The cast also did a lot to bring the musical alive – keeping up a very high energy throughout what was a vocally and physically demanding piece; a feat which cannot be overstated.  Rosie Weston, who played Maureen, excelled particularly in this respect. Weston had a stage presence that was unmissable; her vivacious and somewhat promiscuous character seemed to drive the show at key moments and was a welcome contrast to some of the more serious elements of the play. I must also mention the performance of Kane Taylor, as Roger, whose performance was sincere and relatable, especially in his scenes with Millie Davies as Mimi. The chemistry between these two characters held the play together and was, to some extent, what made the show believable to the audience. However, the whole cast were excellent in their respective roles, all the ensemble members added something unique to the performance, whether as a parent or as a homeless person or even as a Vicar, they brought humour and sincerity to what was an excellently performed piece. My only qualm would be that occasionally some lines were not were not perfectly in time – this was especially in the case of harmony lines which were intermittently a few beats late or just off the beat. Again though, this did little to detract from the piece and the outstanding singing that was displayed within the play.

The choreography of the play was also well planned and well executed, coming together to build climactic, ensemble scenes and then pulling back to create more minimalistic and emotionally delicate scenes. In many ways, the lighting complemented these shifts in tone nicely, however was sometimes a little bit exaggerated in a way that seemed to almost detract from the performance by distracting you from the actors. However, this was more of a stylistic choice than anything else and happened infrequently.

The biggest problem with the show were the sound levelling issues. This may have partly been as a result of where I was sat, at the front, but frequently throughout the show I did find myself struggling to hear the voices of the cast over the band, which did make it more difficult to follow the show. The quality of the music within the show apart from these levelling issues was incredible, as the band as well as the singers were individually excellent even if they were occasionally slightly out of sync.

Rent was a lively and enjoyable production that tackled weighty issues with tact and consideration. The show was a thoroughly entertaining and enjoyable experience that took me through a succession of emotions from laughter to sadness to joy. Indeed, DULOG’s production of Rent is definitely worth watching. The opening night was practically sold–out, which is a testament to how anticipated this production was – an anticipation which was fulfilled in a heart-warming and dynamic play.