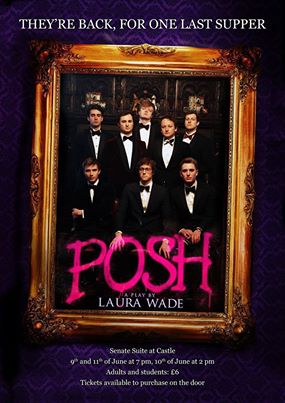 Posh returns for its second run in Durham

Laura Wade’s Posh is perfect for Durham, as a play about the fictional Oxford University Riot Club, upper class university students and the idea of privilege and class consciousness. The class-specific subject matter is close to our hearts, prompting us to question whether we or our friends can see ourselves in the views and philosophy of the characters. The boys portrayed their characters well as hedonistic, but charming and enjoyable, so that the audience felt to some extent involved and implicated when the play took a darker turn.

The senate suite in Durham Castle was a faultless setting, capturing the atmosphere of opulence and luxury, from the music playing when we entered to the beautiful tapestries, curtains and fireplace. It felt intimate, with a small audience of around 50–60 people and we were never more than a few metres from the actors. This was particularly true during a musical chairs scene and when the boys trashed the room, covering the carpet and front row with feathers. The bright lights made the audience feel more exposed and present in the action, mirroring the confined space of the room where the majority of the play takes place.

Posh was also performed in Durham in November, with a few cast changes, so I was initially concerned as to how well the new actors would assimilate. However, having seen the play both times, I found that the newcomers fitted in well with the cast and the boys who had acted in the original run seemed more familiar with their characters and gave polished performances.

The first act was laugh out loud funny and full of energy, despite the rather muted reaction from the audience, perhaps due its small size. We are introduced to a variety of upper class student stereotype, such as the confident womaniser, played by a flirtatious Freddie Hatchett and earnest new boy, Ed Montgomery (Theo Harrison). Joe Burke portrayed the bluff George Balfour well, finding the balance between a quiet sophistication and naiveté about the real world.

Sam Kennerley shone as the arrogant Alistair Ryle, giving an impassioned speech on the state of the nation and the privileged position of the boys at the close of the first act. The scene is staged well, with Fenneley standing up in the centre of the group of otherwise seated boys, adding emphasis to his words. He silenced the audience with his character’s controversial declaration on entitlement and stayed in character in the second act, as his character faced the blame after the drama unravelled.

The two actresses, Izzy Price and Daisy Cummins gave memorable performances in the roles of the daughter of the landlord and the indignant escort respectively, adding an element of realism to the show. Maurice Samely too did an excellent job as the courteous but firm landlord, Chris, in providing a contrast to the boys and keeping the audience grounded within the microcosm of a privileged society. The pace sped up quickly in the second act, culminating in the dramatic ending of the assault on the landlord, giving a darker tone to the latter half of the play.

The production team are to be commended for their attention to detail, with scraps of food on the plates of the Riot club members, although the presence of real money would have been appreciated. The timing for the music was slightly off for a scene in which the boys dance to ‘Sexy and I know it’, but it was a refreshing and entertaining sequence.

Charlie Warner was comfortable in his role as James Leighton-Masters, the Riot Club President, switching effortlessly between courtesy and debauchery. He showed impressive versatility and stamina, with an excellent performance as Irwin in The History Boys directly preceding Posh.

Ben Naunton Davies gave a consistent performance as Hugo Fraser-Tyrwhitt, the conscience of the group. His character’s facial expression and reactions often reflected those of audience, uncomfortable with the behaviour of the other boys, bringing a relatable quality to the group. Credit too to Dom Williams, who played the drawling Toby well and has a remarkable talent for becoming red-faced and acting inebriated. Despite the large cast of boys, they are all given a chance to act and do so well, with a strong group dynamic and amusing ad-libbing, incorporating the names of both myself and fellow audience member, Benedict Weaver-Hincks, into the script.

The play was brought full circle, beginning and ending with the older MP and uncle figure, Jeremy (James Lake) talking to Guy, an earnest Ed Hauschild, then Alastair, in well-placed armchairs at the side of the stage. The repetition in the opening and closing scenes was pertinent in highlighting the nature of the play as a coming of age story, as well as the place of the elite Riot Club in society and its influence in the political sphere.

The actors depicted the elite atmosphere of the Riot Club in a way that was both alien and unnervingly relatable to student life at Durham and the influence of this privileged environment. One scene in particular, in which the boys mock Leighton-Masters for applying to job at Deustche bank, examined ideas of entitlement and a career post-university career. The President declared that the boys are ‘staring down the barrel of a gun called the real world’, a line which will resonate with third years, including some of the actors, for whom it may be their last performance in Durham.