Review: The Picture of Dorian Gray 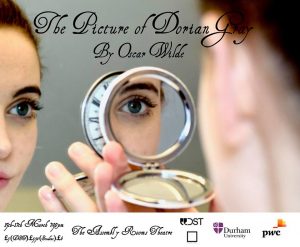 Fourth Wall Theatre Company’s production of The Picture of Dorian Gray presents its audience with an old classic, but with a few twists. It tells the story of the charming young man who becomes influenced and corrupted, leading to his eventual downfall. On entering the Assembly Rooms Theatre, the audience was instantly intrigued by the array of mirrors at the back of the stage which hinted at the themes to come.

I would like to first begin by highlighting the wealth of talent portrayed by the cast. It is clear that a lot of time has been spent on developing detailed characterisations as every actor remained committed to their role throughout the entire performance. I must admit I was a bit sceptical about the decision to cast a female as the leading male but Sarah Cameron gave a truly convincing performance. It was not only her masculine physical stance and voice that impressed me but also her interaction with the other actors. For me, the relationship between Dorian Gray and his love interest, Sybil Vane (Emma Lauren Broadhurst) was believable. Although it must be difficult to portray a romantic heterosexual relationship with two female actors, it proved no challenge for the talented duo and the audience was able to suspend their beliefs for a moment. Additionally, Barnabas Mercer enthralled us with his interpretation of Lord Henry Wotton. On stage, he appeared at ease and in control to the point that I truly believed the tight hold he had on Dorian. He could however, take more care not to upstage himself as at times some of the lines were lost. It must also be noted that many cast members played more than one role. I was particularly impressed by Claire Forster, whose main role was the Duchess of Harley, but later returned to play completely contrasting characters. As the Duchess, she used a high-pitched voice and stiffened her physicality effectively to represent an old, aristocratic woman.

Transitions from scene to scene was not a problem for director Katie O’Toole since she managed to use the space provided effectively. The different levels helped to clearly differentiate the change of place and indeed at times the change of mood. I enjoyed watching scenes take place in the corner of Basil Hallward’s (Hamish Lloyd Barnes) creative studio as much as I did the back of the stage in the gloomy attic. One of my favourite moments was the scene at the theatre, in which Cameron and Mercer looked at the audience as if they were the stage, yet the action took place behind them. This enabled us to see both the comedic ‘bad’ acting as well as the other characters’ reactions. Transitions were also made easier by the excellent choice of music and lighting. An example of this is the use of red lighting in the scene where Dorian appears falling into a debauched lifestyle, surrounded by female prostitutes.

While I appreciate that the choice to set the production in modern day was intended to make it more relatable to the audience, I felt that some elements meant that it was still stuck in the past. Although I understand that some of the characters were of higher status, I didn’t understand the choice of costume and accents. I also thought that they could have made more reference to the modern day perhaps by the scenery. Still, I was impressed by the efforts of the whole team to make relevant an old classic to today’s society which is full of self-consciousness and social media.

All in all, I found the production strong and engaging. Although at times I was a tad confused about the setting, it does promise to challenge you and make you question the corruption influenced by vanity today. Katie O’Toole and her team, along with the entire cast, should be extremely proud of what they have achieved and I recommend all to go and see it as Epiphany term draws to a close.