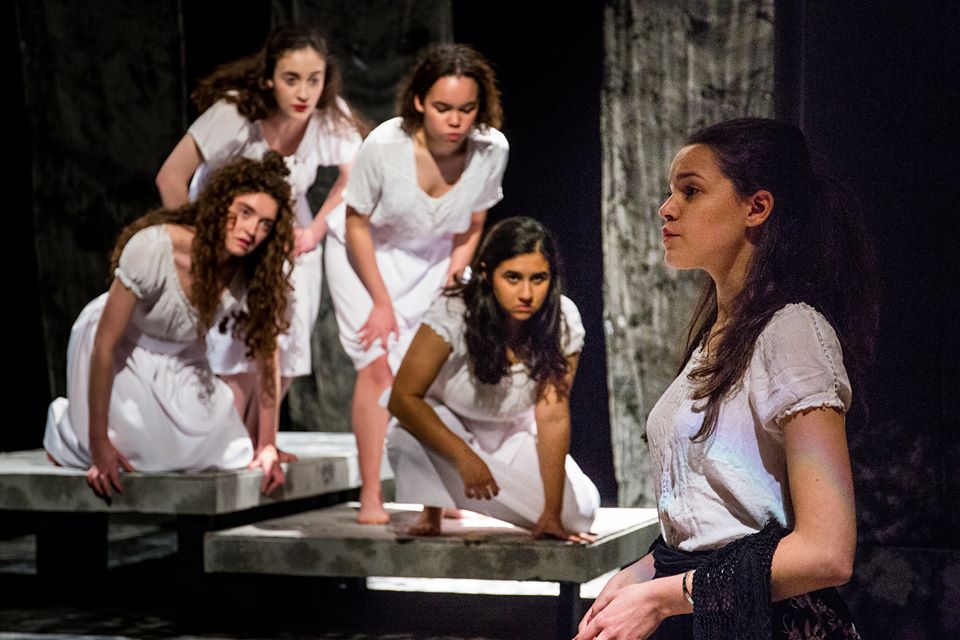 Before ‘Picnic at Hanging Rock’ even starts, the audience are faced with the backs of the five actors who constitute of all the characters throughout the show. Instead of the usual audience chatter beforehand, we are unsettled and sit there in uncomfortable silence whilst we wait. Eventually though, it begins, and the quiet intensity of the production only increases from there.
Without a doubt, the staging, lighting and sound are the strongest elements of the show, the latter two contributing to the overwhelmingly creepy atmosphere throughout. The sound, or lack thereof at certain points, emphasises the tragic and dramatic elements of the play as the theatre can only hear the actor’s voice, and at some points it became almost uncomfortable to watch, for the silence only intensifies the relationship between actor and audience. The sounds intermittently in between put the audience on edge as the natural sounds of the Australian outback and the domesticity of the ticking clock contrast with the increasing tension on stage as the play begins to move more swiftly towards its conclusion. The lighting similarly contributes in its illumination of the characters which initially seems soft, but as the play moves on it becomes progressively eerier, whilst the drops to pitch-black allows the audience to feel the impact of the actor’s final words.
Initially there is no standout performance amongst the actors, but it soon becomes clear this is intentional as they act as one subservient body which misogyny reduces to an object of desire, even within their youth. Soon though, as the actors filter into different characters, and within their narration rapidly change their demeanour to imitate others, it becomes clear they are all incredibly versatile within their performances. Particularly though, Izzy Hassett as Mrs Appleyard was delightfully cruel in her performance as she progresses from overtly strict headteacher to abusive manipulator. All the performances are strong, as the actors effectively perform the gradual progression of controlled madness in the face of Mrs Appleyard’s oppressive doctrine, to the climatic tussle as a reaction of the situation that has been forced upon them, further mirrored by the impressive choreography throughout. Aside from this, the only issues sometimes were the accents, although admirable, sometimes plot points became indistinguishable and the play resultingly became harder to follow, but altogether this was not too big of an issue.
As a narrative, the storytelling by the actors and then the switch to their situation worked incredibly well, the audience were able to gain a sense of the schoolgirls telling their own story, the only thing they could have control over in a world where everything else they did was under watch. However, they soon lose this power, and the structure of the play mirrors this as their story is told through different perspectives. It really demonstrates the level of thought that went into the presentation of the play from the Director Sophie Wright and Assistant Director Claire Simonis. Every aspect of the play is thought through, the actor’s movements, choreography, sound and lighting all contribute to the atmosphere and narration of the play. This results in a chilling experience, which is sometimes hard to follow, but nevertheless unnerving from start to finish.

‘Picnic at Hanging Rock’ is showing at 7:30PM on Friday 3rd October and Saturday 4th October at the Assembly Rooms Theatre.