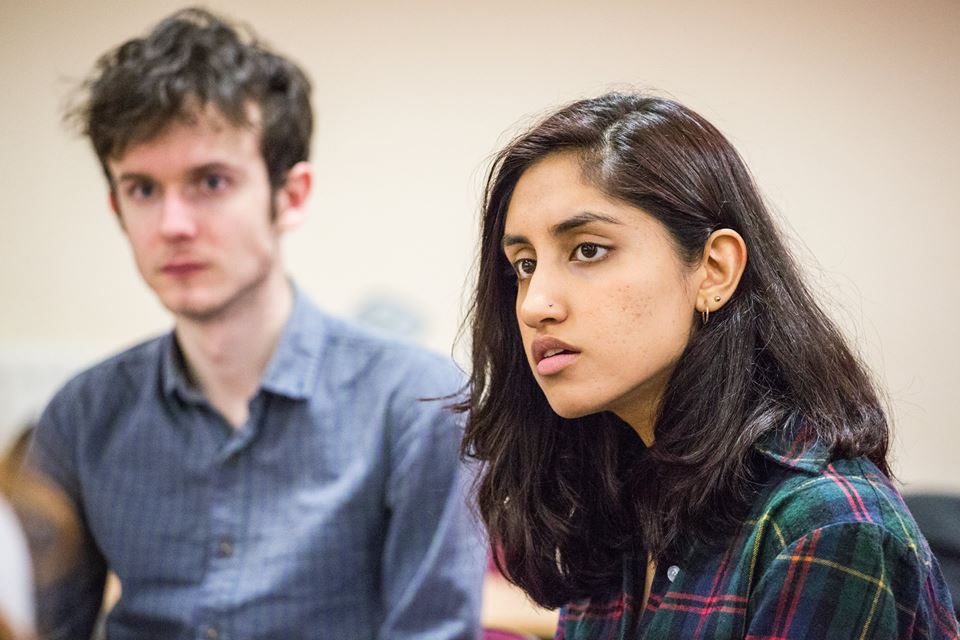 Comedy is often very hard to get right. Pitch Productions certainly set themselves a challenge with Tom Basden’s critically-acclaimed comedy, Party. A play in which very little happens, yet Lipson’s interpretation of Basden’s idiosyncratic style and comedy genius makes this play extremely fun to watch, and had the audience captivated from start to finish.

The venue was ideal – a small, cramped room in the labyrinth that is St John’s College, creating the perfect atmosphere for the somewhat obscure setting of a ‘shed’ (or ‘summerhouse’ in idealistic terms). The minute the audience walked in, the actors were already on stage in full character, crowding around a small desk with various bits of paper, pens, and a large whiteboard behind reading, ‘credit crunch = bad’, setting the tone for this unique comedy. Considering the props and space were very limited, the cast did a fantastic job at making full use of what they had available, hardly ever lacking in movement or expression throughout the play. This creative staging also allowed for a more intimate set-up between the audience and the actors.

The characters (five naïve students hoping to write a manifesto for their new political party) are full of wit, passion, and utter stupidity. ‘Mel’ played by Ambika Mod was particularly pleasant to watch, her dead-pan expressions combined with her excellent portrayal of a childish need for power perfectly continued the comedy without distracting the audience. Credit must also go to Hamish Lloyd-Barnes who played ‘Jones’ and Claire Forster who played ‘Phoebe’ for their endless energy and commitment to two of the hardest roles, in my opinion. Although Lloyd-Barnes and Forster ultimately managed to keep up with this fast-paced comedy, there were moments when the comedy stooped, losing laughs either through bad timing or through letting the awkward scenes drag on for a bit too long. William Hanway, who had a brief stint as ‘Short Coat’, Phoebe’s love interest, is also to blame for this elongated awkwardness during his and Phoebe’s cringeworthy exchange. Having said that, Hanway made the most out of such a small role, as did Forster and Lloyd-Barnes, by making full use of their facial expressions and physicality, enhancing the comedy in a subtle yet effective way.

It goes without saying that, for me, the two actors who stole the show were Andrew Shires playing the wannabe leader ‘Jared’, and Bróccán Tyzack-Carlin who played the constantly cheerful ‘Duncan’. Shire’s portrayal of ‘Jared’ reminded me of a Basil Fawlty-type character, his blank expressions, mispronunciation of words and brilliant employment of sarcasm carried the comedy from one scene to the next. The audience were certainly sympathising with ‘Duncan’ played by Tyzack-Carlin, whose keen spirit and comic timing were flawless, holding the audience in the palm of his hand.

Credit must go to Director Kate Lipson, who successfully managed to strike just the right balance between comedy and sympathy, as well as employing delicate techniques that kept the audience engaged and intrigued throughout. Pitch Productions have certainly succeeded in showcasing a stingingly amusing and feel-good production, perfect for cheering up those November blues.