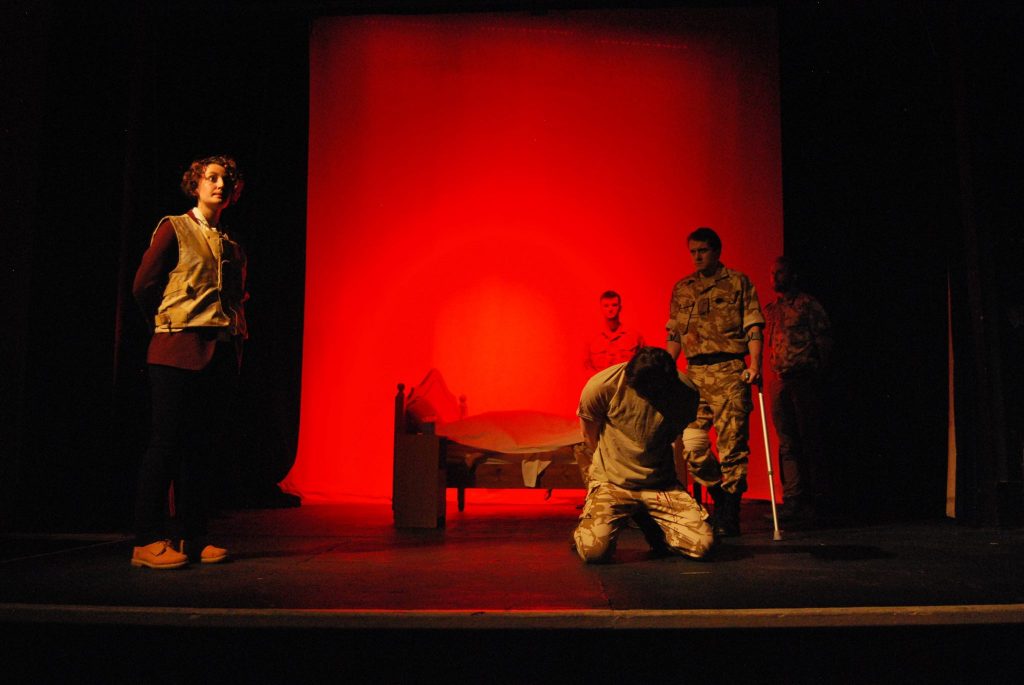 ‘The best piece of theatre I have ever seen in Durham’

To choose Othello, one of Shakespeare’s great tragic masterpieces, as a directorial debut is a bold choice. For Becky Wilson, it was a choice that paid off, as ACT’s production of this piece was an indisputable triumph.

Many of Becky Wilson’s directorial decisions were nothing less than inspired. Her subtle updating of the piece to modern day Iraq worked beautifully. Indeed, the way she modernised various communications with cell phones and laptops, and the drinking competition with beer cans and yelling helped the audience relate to the piece and made it very accessible for those who aren’t usually fans of Shakespeare. Her thought into the character of Iago and decision to place him away from the crowd of characters at all times to show that he was the outsider was excellent; opening and closing of the piece with him was beautifully done, and the evident extensive character work with every cast member was commendable.

Wesley Milligan’s portrayal of Othello was wonderful. He brought a charm to the character that is rarely seen, usually overshadowed by his military nature. Indeed, he was absolutely believable not only as a general of the army, but also as a besotted lover. What was even more impressive was the way he managed to command respect with his manner, and not only with his rank. His entire characterisation was clearly well thought through, with everything down to his posture reflecting his good nature and natural authority. By the second act though, I was ready to see the madness that Iago has driven Othello to. Milligan shouldn’t be afraid to let go of his control just a little bit more, as to see an edge of insanity, rather than just overwhelming anger, would tip the audience’s sympathies in Othello’s favour. This is especially important when he becomes abusive to Desdemona, played by Erin Lawrence, as otherwise it can seem like far too calculated a move.

Indeed, It is oft noted that the character of Iago is one of Shakespeare’s cleverest pieces of writing. Adam Simpson took Shakespeare’s words and lifted them to a new high with his impeccable characterisation. It cannot be said with any levity that someone was born to play a role, but if it can be said, it can be said about Simpson with this one. He terrified, repulsed, enthralled, charmed, haunted and excited the audience- sometimes simultaneously. His Iago was so believable when manipulating Othello and Cassio, that you sometimes found yourself second-guessing whether he truly meant them any harm- even after just witnessing a monologue on exactly how he would exact his revenge. It is the mark of a truly great actor to be able to convince an audience of his character’s motives, when even the character himself is acting. It was riveting to watch, Simpson undoubtedly stole the scene whenever he was on stage- at one point I wrote down spell-binding- and his sudden flips between moods were neigh on perfect. Furthermore, Simpson’s physicality was excellent, he ranged from sprightly to stately to what was essentially a mad dog with startling ease. There really isn’t an aspect of this portrayal of Iago I would criticise, it was one of the most dynamic, intelligent performances I have seen in Durham. Only out of personal preference would only ask him to take a little more time over his speech on hating the Moor, as for those unfamiliar with the text, this is a key insight into not only the character but the plot, and tends to be difficult to follow.

What both actors did, truly commendably, was modernise their characterisations. Milligan’s Othello brought an air of a confident, charming businessman to the character, utilising the fluidity and charisma often seen in today’s alpha male, rather than the stiff theatricality often used in the past. Simpson’s Iago also felt very up to date, with his faultlessly charming psychopath and the slick metrosexuality he brought to the piece.

Another actor who managed this was Erin Lawrence, playing Desdemona. Shakespeare’s words have never been so accessible as when she spoke them. She managed to bring a level of naturalism to her beautifully understated portrayal of Desdemona that is almost impossible to find in Shakespeare. Additionally, she added a nice edge of backbone to a character who is written very one-dimensionally as a paragon of virtue. One thing she should watch however is how much she crosses her arms when pleading her honesty, more open body language here makes it easier for the audience to accept that she has nothing to hide.

The entire cast truly must be commended for this stellar interpretation of one of Shakespeare’s greats. In particular, Ruari Hutchison playing The Duke and Jake Hathaway playing Cassio brought new meaning to the words clarity and stage presence. Hutchison commanded the entire stage in his scene as The Duke, imbuing every single word with noble authority. Hathaway’s Cassio was also a pleasure to watch, he had an innate likeability and spoke with an unmatched clarity throughout the night, allowing the audience to hear every word he said. Angharad Phillips’s portrayal of Emilia was incredibly touching, particularly in her scene with Desdemona where she brought a beautiful multi-layered persona to a character sometimes forgotten as a plot device. My only criticism would be that in the final scene, she occasionally gave way to the melodrama of her lines, rather than drawing back slightly to allow the naturalism that had been injected into the rest of the show to come to the forefront.

It must also be noted that the rest of the production team was highly talented, with the army set allowing full immersion into the piece, and Daphne Marini’s costumes really aiding the audience’s ability to view the world of Othello through a twenty-first century lens. The only flaw with the costumes would be the placement of Emilia and Desdemona in partial army gear, as I found it initially confusing to understand if both characters were being portrayed as soldiers, a decision I was not completely sold on anyway.

There were also a few minor flaws that could very easily be cleared up by the second night. Some of the stage fighting was awkward, and a few too many lines were delivered to the back, with some of them lost to the audience’s hearing. Finally, there were a number of instances of very odd blocking, where it seemed the actor had been told to walk to a certain place or to pace without a clear idea of why, or what this was supposed to convey. I believe little more thought into this area is necessary. However, in no way did any of these minor occurrences hinder my enjoyment of the piece.

Overall, this was the most relatable, engaging and accessible piece of Shakespeare I have ever seen performed. Along with my housemate- who usually loathes Shakespeare- I spent two hours after the show excitedly telling anyone who would listen that it was the best piece of theatre I have ever seen in Durham. It’s an exciting, dynamic production filled with almost unfathomable levels of talent, in both the production team and the cast. I cannot urge strongly enough that this is a must-see piece.