Review: Much Ado About Nothing 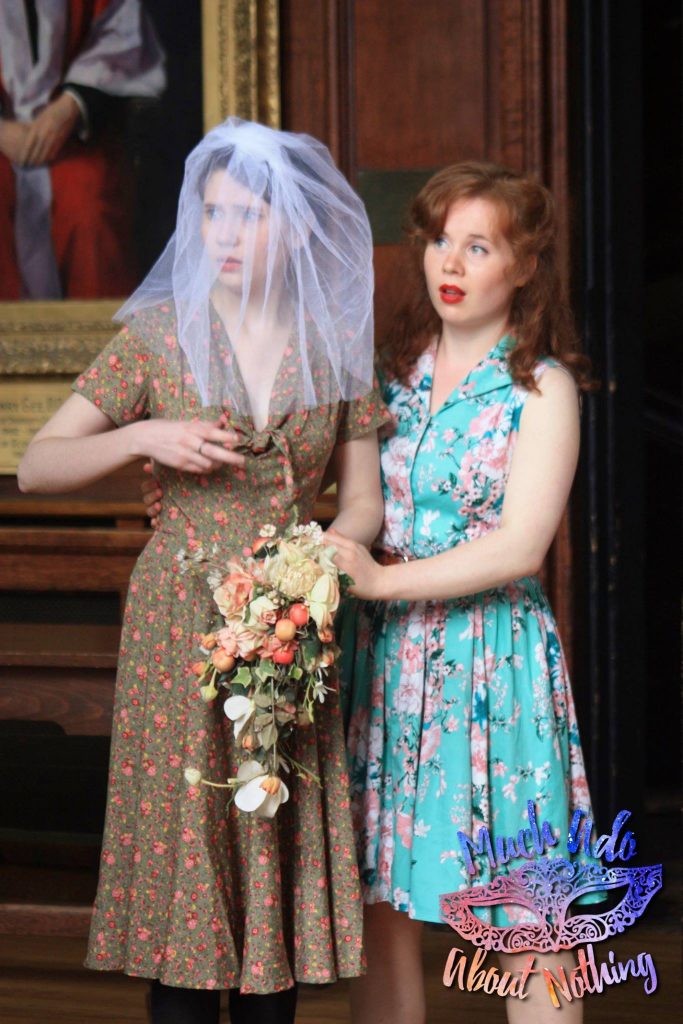 Castle Theatre Company’s interpretation of Much Ado About Nothing, by William Shakespeare, was deliciously humorous. Through out the performance, the audience were kept thoroughly entertained by slick performances and impeccable comic timing. Despite this, at times the show looked a little unpolished, preventing it from achieving the professional status it so nearly accomplished.

The director, Kate Barton, chose to revolutionise this famous comedy by setting it in the 1940’s. I am usually sceptical of choices like these, as manipulating the era can occasionally clash with Shakespeare’s Elizabethan language and thus, formulate a disjointed aura within the performance. However, this decision worked very well, as the 1940’s music, makeup and costume provided the production with a unique touch. Little details, such as the dancing choreography and having the cast sing songs from the 1940’s were quirky choices, but were a refreshing and innovative way of presenting one of Shakespeare’s greatest classics. No doubt, the producer, Leying Lee, should be praised for assembling all the props and attire, which bequeathed the play with a believable post-war ambience.

The blocking, simply put, was superb. The set was simplistic; with a bench, wooden fences on either side and a couple of patriotic English flags. Although the set was sparse, every item was central to the plot and was utilised to the full. Before watching the show, I had no idea that a bench could be perched on, dragged and orientated in so many different ways. Kate Barton managed to draw out every comical element of the play possible, using the physicality and staging of her actors, which she must be granted great credit for. The pinnacle of her directing genius was illustrated through the farcical scenes where Beatrice and Benedick were tricked by their friends and family into falling in love with one another. Both scenes mirrored each other in terms of comicality, emphasising the compatibility of the two characters and shaping the show into a satisfyingly symmetrical piece of drama. In fact, all the scenes containing the witty tugs of war between Beatrice and Benedick were executed with finesse, stamping the play with a professional mark.

The acting standard was extremely high, with solid performances throughout the entire ensemble. Within minutes, Theo Holt-Bailey had commanded the stage, entrancing the audience with Benedick’s charmingly cheeky wit. Every line was beautifully delivered; perfectly highlighting the poetical beauty of Shakespeare’s language. Not only did Holt-Bailey portray flawless intonation, but the fluidity of his physicality immediately transfixed any wandering eye. It is not an easy task to speak Shakespeare’s language with natural fluency, however, Holt-Bailey effortlessly articulated each sentence with faultless delivery. Another outstanding performance was that of Georgie Franklin’s, who played the character of Beatrice with the perfect amount of sassiness, sauciness and sexual appeal. Her chemistry with Holt-Bailey was electric. Both of them seduced the audience with their witty charm, brilliantly bouncing off each other. These two, along with many others, could not have been better cast. Jenny Walser must also be congratulated for her elegant portrayal of Hero. Her subtle smiles and mischievous looks gave her character a must needed panache, preventing Hero from turning into one of Michelangelo’s sickeningly sweet cherubs.

Claudio, played by Harvey Comerford, was sweet in his puppy-like adoration for Hero, however, at times I felt underwhelmed by his emotion. I think he needed to display a greater sense of shock and relief upon discovering that Hero was alive. Although Sarah Slimani’s portrayal of Dogberry was highly whimsical, unfortunately, it was clear to see that she was struggling to remember some of her lines, leaving the occasional scene with a hint of awkwardness. That said, both her and Alex Prescott made an enchanting comedy double act, which often left the audience in fits of side-splitting laughter. The rest of the ensemble gave commendable performances; Kate Barton evidently made outstanding casting decisions, fully utilising the array of talent that Durham Student Theatre has to offer.

There were some issues with the play. Overall, a greater level of projection and clarity is needed, however, this was possibly caused by the poor acoustics of the Great Hall. Despite the cracking acting and direction, the production sometimes felt a little under-rehearsed. Nevertheless, by the time the show goes on tour, I am certain the performance will be a visual spectacle, hypnotising both English and American audiences alike. With a few tweaks and more rehearsal time, this show has the potential to match the esteemed standard of the Globe Theatre.