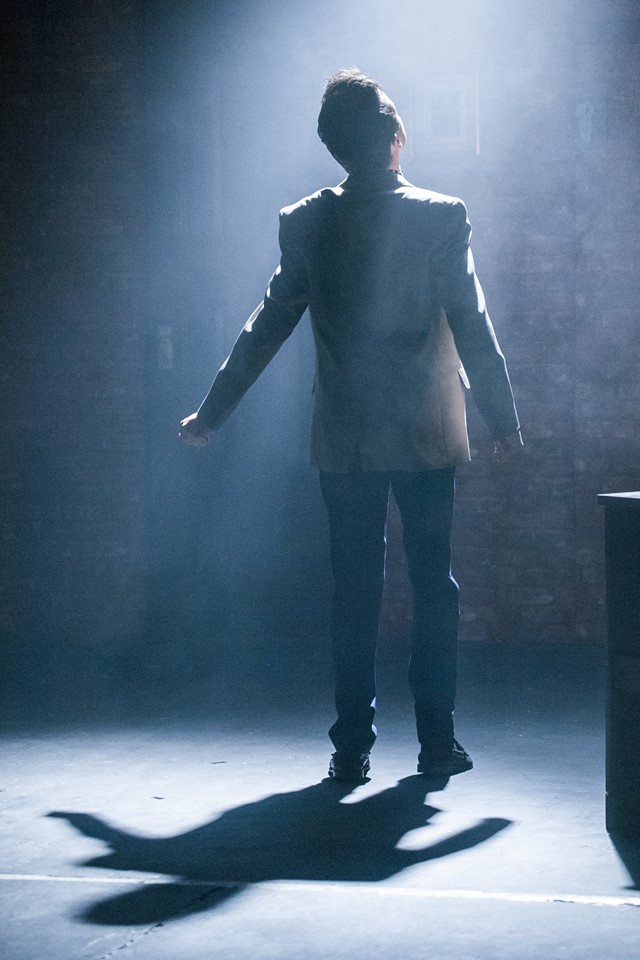 ‘You don’t know whether to laugh or grimace’

Jez Butterworth’s Mojo is one of those plays you’ve either heard of or you haven’t. I for one had heard of this locomotive of a play and was both curious and excited to see Pitch Production’s interpretation

Seedy and sordid 1950’s Soho is where the scene is set. From the offset, pounding music pulsed through the theatre as Tyler Rainford, playing Silver Johnny, flew onto the stage with immense vivacity and power, when only moments later he majestically jumps off of the stage and out of the doors. A high energy beginning foregrounded the rest of the play and set its heartbeat racing- this was an underlying tone throughout, as if anything mad and bad could happen at any given moment.

We are then introduced to Sweets, played by Luke Maskell, and Potts, Tristan Robinson, two of the members of the Atlantic nightclub within which the entirety of the play is set. Both actors were extremely skilled in their distinguished portrayal of their respective characters: Maskell’s drugged up, neurotic and bouncy movement was compelling to watch; his facial expressions were a particular haven of comedic gold for the audience, my favourite being on the line ending ‘frothy coffee’ which largely reminded me of Jim Carrey in ‘Bruce Almighty’. Robinson was equally convincing as Potts; a highlight being his declaration of an imminent heart attack resulting from the drugs he had just been guzzling- it was both dramatic and funny, leaving Robinson standing panting like a dog centre stage, wide and crazy eyed with his arms static straight up in the air trying to revive himself. I felt that both characters grew increasingly three dimensional as the play progressed- you could feel the audience’s attention and intrigue the entire time they were on stage as even when they were not speaking, they were alert and electric always. Their placement very near the front of the stage ensued the sense that we were waiting with them, as they became agitated about the commotion going on outside the nightclub.

Contrasting to the ecstasy like tendencies of Sweets and outspoken Potts, was the softly spoken Baby played by Sam Penn. We are never sure if Baby is just a chilled, nonchalant kind of guy, or slightly mentally unhinged, although this is perhaps, most definitely confirmed in the great climax of the plot. Penn created a completely different character to the others and his almost happy-go-lucky ambience continued pretty much throughout. Even upon discovering the fate of his father, he is entirely calm and collected- the wait for a dramatic breakdown or outburst was always expected, and it was this expectation that planted a seed of nervousness and uncertainty for the audience surrounding his character, albeit the most relaxed. The play followed this, a constant anticipation of dramatic outburst that although peaked and troughed, was forever underlying its duration, and created both excitement and suspense.

Having read the director’s, Ambika Mod’s, note on ‘The Bubble’ about Mojo I completely agreed with her in that Butterworth almost makes the plot take a backseat, and the play is taken over by the characters themselves in all their distinct and idiosyncratic ways. In some ways at the beginning this did lend itself to confusion, however it soon unravelled itself and it was energising to follow the incredibly quick paced ping-pong dialogue. Because the energy was maintained throughout by all the actors, the silences and suspenseful tension was all the more emphatic. Where this was most notable was Sophie Forster’s performance of Mickey, the seemingly superior, jaguar like character. Her stoicism and strength was evident and the deliverance of her lines packed a punch. Furthermore, Tyler Rainford’s lighting design was imperative in the creation of the living intensity of the piece. Brightly glaring onto the whole of the stage, it was like the sun beaming down and creating an omnipresent inevitable heat that rose and rose as the plot thickened and complicated.

Something I appreciated about the play was that there are so many moments when you don’t know whether to laugh or grimace. Or when you do laugh, you find yourself grimacing at yourself for laughing. And when you grimace, you find yourself laughing anyway. Mojo is a real goldmine of black gangster comedy and is blissfully exhausting to watch. Mod also commented on Mojo’s core of the will and want to entertain, and both she and the actors achieve this above and beyond. Mojo is actually the first play I’ve ever seen at Durham, and it has set the bar extremely high for future productions yet to come.