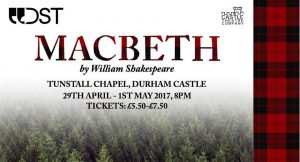 ‘It certainly had some praiseworthy elements’

The iconic Macbeth is arguably one of the most difficult of Shakespeare’s plays to stage; there’s bloody murder, mystical witchcraft, roaring battle scenes, and heart-wrenching character development that should leave the audience unsure of whose side they’re really on. Castle Theatre Company’s production of this timeless classic may not have matched up to all these requirements, but it certainly had some praiseworthy elements.

Firstly, one of this show’s major selling points was the innovative use of the venue, bringing the audience to the forefront of the action even before you enter the chapel. As I entered the grounds of the castle, I was greeted by the sight of ominous sentinels holding tartan flags, guiding my way to Tunstall Chapel, and filling me with a delicious sense of foreboding. Once inside, I was intrigued by the spectacle of the three witches lurking between the pews, one whispering incantations to herself whilst another eerily stared down the entire audience. Indeed, there was a hushed sense of captivated anticipation amongst my fellow audience members, brought on both by the witches and by the glorious vision of the chapel alter, illuminated solely by numerous candles. The space was continuously used for maximum effect, employing the balcony and the alter at highly effective moments. Intelligent blocking also meant that the long, narrow performance area was never a hindrance on the audience’s ability to see and feel the emotions of the characters, a trap that could have been so easily fallen into.

The only drawbacks this venue held were the facts that firstly, there was no room for a table in the infamous Banquo’s-ghost scene (which, for many hardcore Shakespeare fans would feel unnatural), and secondly, the use of blood was apparently a no-go. As petty as it may seem, there’s something fundamentally disappointing about the absence of blood in a production of Macbeth, especially in the immediate aftermath of Duncan’s murder, where Macbeth and his wife make numerous references to his hands being awash with Duncan’s life-force. There’s only so much imagination an audience member can conjure up on their own, and this time I did feel slightly let down by the lack of such a powerful visual image.

Having said this, credit must be given to Nicholas Denton’s fantastic performance in the titular role; his character arch was incredibly nuanced, the difference between his Macbeth at the beginning and the end truly showing the character’s drastic descent into mania. In the famous dagger speech, I (along with a few other audience members) genuinely had to check a couple of times that there wasn’t actually a dagger hovering in the air, such was Denton’s intense focus and masterful acting. Further praise should be afforded to Ginny Leigh for her wonderful portrayals of an endearing Duncan and a foolhardy Malcom. Her scene with Macduff (Hal Lockwood) was tense and invigorating, and when the news of Lady Macduff and her children’s murder is received, Lockwood’s reaction was truly gutting. I would say that for me personally, this scene was an absolute highlight, especially when the actors indicated towards the beautiful alter as they cried out for God’s mercy and assistance. I would also say it would be wrong to not credit Alex Ottie for his fascinating and actually quite disturbing portrayal of the porter. His gravelly voice reverberated around the room, completely captivating everyone’s attention for the porter’s entire speech.

Other performances were very strong in some respects, and possibly less so in others. I’m not totally convinced that the role of Lady Macbeth (Kesia Schofield) was truly understood, either by the director or the actor: there were so many incredible lines that Schofield threw away rather than allowing the audience to relish in the spine-tingling ruthlessness of Lady Macbeth’s character. There were many times where Lady Macbeth reacted too emotionally to her husband, particularly in the Banquo’s-ghost scene. Rather than attempting to stop her husband from completely ruining everything they’d accomplished by spilling the beans on Duncan’s murder, she tearfully and hopelessly stares on at her rambling spouse, two words that I would never normally attribute to such a classic character. This whole scene in general was rather anticlimactic, with the court guests standing around awkwardly rather than looking legitimately concerned about what Macbeth is saying (or screaming). It felt strange that the appearance of the ghost was not marked by some kind of music or soundscape, particularly when previous scenes had not shied away from the use of sound. Other things stood out as feeling a bit under-realised, particularly the portrayal of the witches. In the director’s note, it was stated that the witches in this production would not be like the usual crones seen in most performances, but would be women at one with nature. Indeed, the three girls made a striking image in flowing green with leaves in their hair, more like nymphs or sirens than witches. This would have been effective if the characterisation of the witches themselves did not completely contradict what the director’s note had laid out; the first witch in particular (Coco Huggins) had a very crone-like voice, and constantly twitched in what I assume was meant to be an eerie fashion but ended up just being distracting. Additionally, although Banquo (George Tarling) had good presence (both alive and in ghost form), extra care could really be taken to ensure that his diction and clarity improves in the rest of the run. A final oddity was the requirement that audience members wear black tie – there was nothing about the production that hinted to its purpose, as the setting of the play was in the 11th century. I certainly felt glam, but I could not in all honesty see why it was necessary. Additionally, there were, of course, the occasional fluffs in lines, and a couple of the opening scenes felt incredibly rushed, both of which I would attribute to first night nerves.

Overall, though there were elements that called for more thought and development from the creative team, this production was impressive in many ways (extra praise should be given to the hair team for some absolutely stunning hairstyles). A little more consideration of some finer details would go a long way in improving CTC’s Macbeth, but in general they should be proud of what they have accomplished.