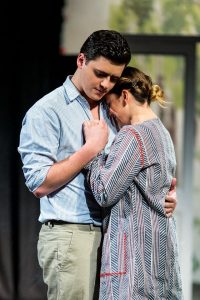 All we’re asking for is some humanity, is some freedom, is to throw off everything that holds us down and explore what we could do instead,” says the 19-year-old Sandra in Mike Bartlett’s ‘Love Love Love’. And at this time in the academic year, I’m sure that’s a wish many of us can relate to. Luckily for me, what I had the pleasure of ‘doing instead’ was seeing Pitch Productions wonderful adaptation of this play. Overall, this production was superb, and brilliantly handled by the cast and creatives alike.

‘Love Love Love’ follows two ‘baby boomers’ Kenneth and Sandra from the ages of 19, to 64, through three very different phases of their lives. We are first introduced to them as 19 year old students of Oxford University, living in the hip and happening London of the 60s. Kenneth (Broccan Tyzack-Carlin) is happily wasting his time in his brother Henry’s (Charlie Hyde) flat, until he is introduced to Henry’s new girlfriend Sandra (Florence Petrie). The two form an immediate connection, and we next see them 20 years on, married with two children, having traded weed and brandy for cigarettes and wine. The third scene sees the two at 64 years old, comfortably retired, but not without the problems caused by their children’s dysfunctional upbringing.

I’d first like to highlight the acting as being consistently strong. Petrie in particular, lifted the energy on stage with every entrance, and remained a commanding presence no matter what age she was playing. Indeed, the challenge of maintaining yet growing in your character through the decades, while still effectively portraying different ages was handled brilliantly by both Petrie and Tyzack-Calin. The first act felt the slowest of the three, as perhaps the actors took a while to warm to their roles. However act two was particularly engaging, with the four actors displaying an impressive ability to have the audience in fits of laughter one minute, and winces of pain the next. The couple’s two children Rosie (Emma Broadhurst) and Jamie (Rosie Minnit) were equally strong, and managed to create some of the most poignant (in the case of Broadhurst), and funny (in the case of Minnit) moments of the play. The third act presented the audience with the question it had been building towards throughout the rest of the play. Should we resent the ‘baby-boomer’ generation of Sandra and Kenneth for their easy, self indulgent, comfortable lifestyle? Or should we shake our fists and blame the millennials for believing everything should be handed to them on a silver platter. It is a credit to the actors that the audience is unsure as to who to side with when the curtain is drawn at the end of the play.

The team of Lucy Knight (director) and Mally Capstick (assistant director) should be commended for their efforts, especially in creating characters with such convincing emotional growth in a play that spans six decades. I also appreciated their creative decisions, for instance having a projector display the year of the scene overhead as it begun. I understand the choice of having an interval in between each act, as it meant that the stage crew could bring the new scenes without the need for what would be a long, clumsy blackout. However, to keep the pace and energy up, I felt these ‘mini intervals’ could have been a lot shorter. The movement on stage and blocking felt slick and well thought out, however I do question the decision to have the actors step out and deliver their monologues to the audience, as it broke up the naturalistic dynamic on stage. Suzy Hawes deserves a mention for sourcing such fantastic vintage costumes, as does Jasmine Lo, for her beautifully painted set.

Knight and the whole team have put together a fantastic play, showcasing some of Durham’s best acting, so definitely make time to see this show if you can!