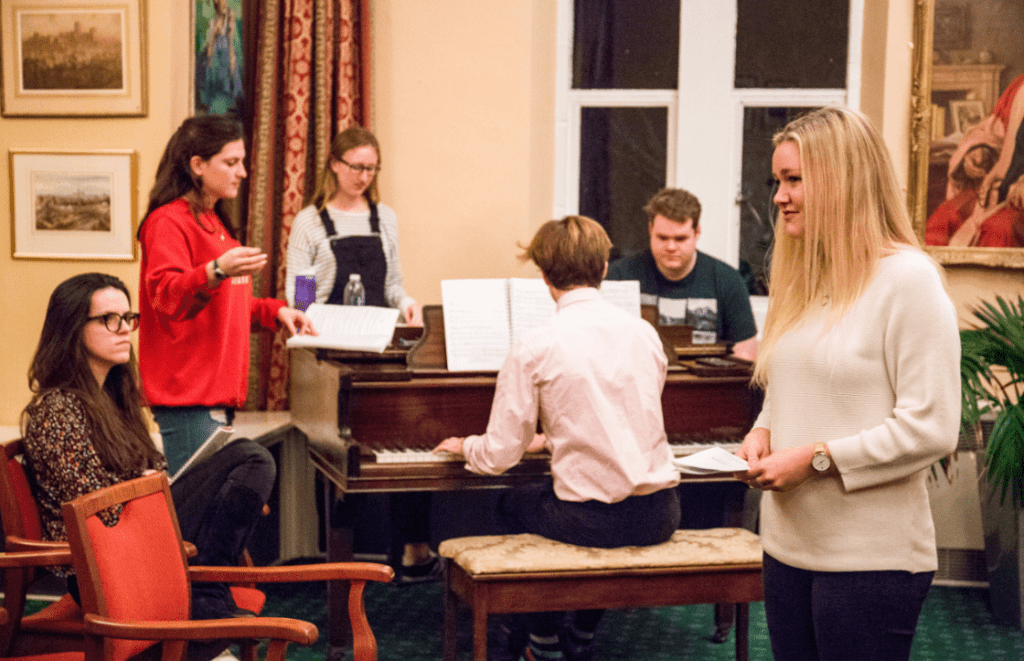 Tone Deaf Theatre Company’s ‘The Last Five Years’ is a rousing success in its no-boundaries take on the off-Broadway musical as the audience is taken through the five years of Cathy and Jamie’s relationship.

Elliot Mather’s Jamie immediately commanded the room with his unique energy and vivacity that made the audience simultaneously root for his character, yet become frustrated with him as his story-line drew to an end and Cathy’s moved backwards. His obvious stage presence imbued his performance, with his lively movements capturing the passion of writer Jamie. Amy Porter similarly gained the audience’s support in a different capacity, as her bubbly Cathy made it impossible not to like her, with the audience increasingly feeling compassion for her in her progressive happiness, as her story-line developed backwards. Despite the relationship breaking down of its own accord, Porter’s Cathy inclined the audience to feel almost protective over her and dislike Jamie, but Mather’s performance made this a struggle as well, although he does become subtly unlikeable by the end of the performance.

As singers, they both excelled, it was mentioned in our interview with the team that Mather’s had been used to more exuberant musicals before ‘The Last Five Years’ and it shows, but only to his benefit. This experience allowed his voice to fill the room as he effortlessly hit his notes consistently throughout the show. Similarly, for Porter, her voice carried over the music and both actors excelled in the comedic elements of their songs, such as the ‘The Schmuel Song’ and ‘Climbing Uphill’, where they both embodied the exuberance and the distress of their characters respectively.

The live music was phenomenal as the orchestra jumped effectively between upbeat and downcast for both story-lines with bridges that were hardly noticed until the next song began. It really shows Bella Elwes’ and the orchestra’s talent that they were so polished within their performance as the music helped to transition into each scene and change the mood at the drop of a hat. At the beginning it did feel as if sometimes the orchestra slightly overpowered the actors but this quickly disappeared as the production progressed and everybody settled into their roles.

Isabelle Culkin’s choice to have no backstage for the actors worked incredibly well as it immersed the audience more in the character’s lives, as you really saw them live over the five years of their relationship. Although towards the beginning it could feel awkward as there was no boundary between actor and audience, it became quickly apparent the closeness was just a part of the intimacy of the show, especially as wardrobe changes were made in front of the audience it really allowed us to feel as if we were in their environment. Additionally, as they stayed in character throughout it kept up a constant sense of motion throughout the play, allowing the audience to see that juxtaposition of the feelings of the characters, which dramatized the emotions more effectively as it encouraged sympathy on both sides, as the audience knew what was to come. Sometimes though, it felt as if more interaction between the characters could have highlighted the emotional impact of their interlinking story-lines.

The production was incredibly well put together and thought out within its dynamics, with staging creating a real living space for the characters. Performances were engaging and allowed the audience to interact with the material, for musical-lovers and drama-lovers alike, this really is a must-see for anyone struggling for choice within Durham.