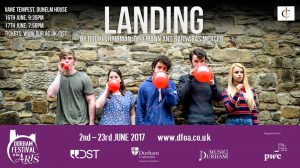 ‘The play thrives on not taking itself too seriously’

I am hugely excited about the amount of new student writing Durham has to offer, and Bodhi Shripman-Dellmann and Barney Mercer’s ‘Landing’ shows that this writing can be fun and diverse. Examining the all too familiar setting of student halls, the pair humorously examine the relationships that develop over Freshers and create an incredibly accessible and relatable piece of theatre that is very entertaining. The play thrives on not taking itself too seriously, however, I feel that there are some elements that need greater consideration to take the production up a notch.

My initial concern with the production was the choice of venue; with an extensive set consisting of five beds, a keyboard and a myriad of props, the minimalism of the Black Box seemed misused. These issues were augmented with the intimacy of the venue, too. The frequent black outs and scene changes were awkward and clumsy due to the close proximity of the audience who could see and hear everything that occurred in these moments. The Black Box, to me, felt like a somewhat lazy option, and I would have been excited to see a production based so heavily around student life done, perhaps, in a promenade style or a more relevant venue.

The play’s structure also felt somewhat lazy; while the play thrived from one liners and witty comments, they soon lost their power as they were used far too frequently to close a scene and were followed by a snap blackout. Sadly, this began to feel somewhat gimmicky and diminished the humour of the piece.

The actors, however, should be praised for their comedic performances as they maintained consistent energy throughout. In particular, Barney Mercer’s portrayal of the socially inept Ollie was a delight to watch and offered humorous, if not sometimes absurd, comments that demanded the love of the audience. Mercer was the glue that held the production together, and sadly, each other character felt secondary to this. This was not the fault of the actors, however, as Elle Morgan-Williams performed with great conviction, as shown through her confident interjection of ‘Let it Go’, but her character limited her acting capacity as she lacked a definitive personality, being made a mere sex object to Zac Tiplady’s Ezra, who also felt one dimensional.

While this production thrived from being one dimensional and mocked the student life with considerable meta-awareness, I felt that a production so closely linked to the lives of its audience members needed some greater depth to be truly successful. I feel this could have been teased out through the storyline of Millie Blair’s August, who drops out of university, yet this plot was left underdeveloped and seemed to be too heavily centred round her boyfriend. This was somewhat disappointing but could be achieved with some slight tweaking of the script.

Yet Bodhi Shribman-Dellman and Mercer’s production is wonderfully meta-theatrical, humorous and reminds you not to take yourself too seriously. While it needs some carefully considered changes, I think we can all see a little bit of ourselves in Landing, and that’s what makes this play so enjoyable.