Review: ‘KEITH: Why did the chicken cross the road?’ 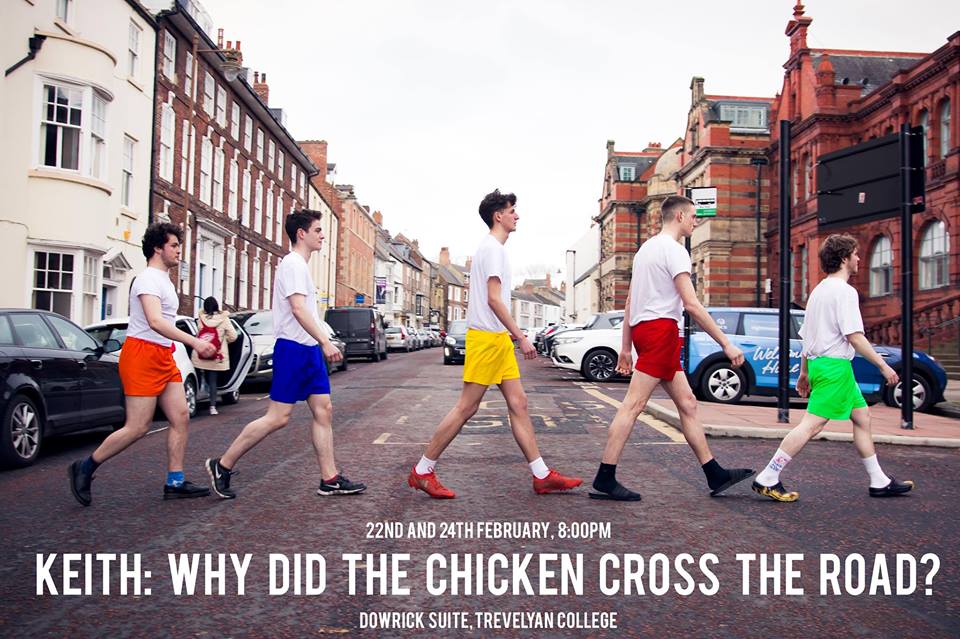 Sat next to me on the opening night of KEITH: Why did the chicken cross the road? was a woman who told me she’d come specially because of how impressed she’d been with KEITH at the Edinburgh Fringe. I had no such prior experience, and resultingly, expectations were non-existent. But I’m glad I kept an open mind. Sure, the essence of KEITH is a group of friends having fun, but the same could be said for Monty Python.

Although the show seemed longer than its run time, this isn’t the usual indictment of a show dragging on. Quite the contrary, by the end it was stunning just how much had been jam-packed into the script. The real strength of KEITH’s work is that the majority of the sketches are pretty much bite-sized, with several clocking in at under a minute. This means that not only do the punch lines come thick and fast, with none of the painful, self-indulgent drawing out which can be the death of many a good joke, but also that the show covers a variety of bases. With humour being as subjective as it is, it’s basically impossible for every audience member to find every joke funny. Here, that’s fine – whatever didn’t quite work for you is over quickly and it’s onto the next sketch.

It’s more on the farcical side than the sharply satirical, but there’s still nice variation to the kinds of comedy: puns, running gags, parody and some literal toilet humour. It would have been easy for KEITH to pander to their audience with a few Durham-specific jokes or even some lines about the increasingly absurd political world, but the troupe thankfully keep to a more general, creative form of humour rather than resorting to these convenient crutches. Similarly, whilst the comedy can be shamelessly edgy, it never teeters over the line into the territory of being flat-out offensive. Even in one sketch about anti-semitic Sherlock, it’s Holmes who’s the butt of the joke. In an age where so many claim comedy is being over-policed, KEITH shows that you can be edgy without offending.

Special mention to the sound, operated by Eleanor Diggle and chosen by the troupe. So often you’d think a joke has run its course, only for the smartly-chosen intermission music to surprise you with another laugh. As for the performers, it’s a testament to the strength of the team that it seems churlish to pick one out; Jack Firoozan, Mungo Russell, Calum Maclean, Barney Mercer and Andrew Cowburn are a force to be reckoned with, sometimes corpsing but never missing a comic beat.

Just like the answer given to the titular question about the chicken (no spoilers), this isn’t exactly a seismic revolution in comedy (and it isn’t trying to be), but its team of five entertaining boys in boxers make the audience laugh. And while summative season sucks at all student souls, a show which oozes fun like this is the perfect antidote.

KEITH: Why did the chicken cross the road? Is on at 8pm, Sunday 24th February in the Dowrick Suite, Trevelyan College.