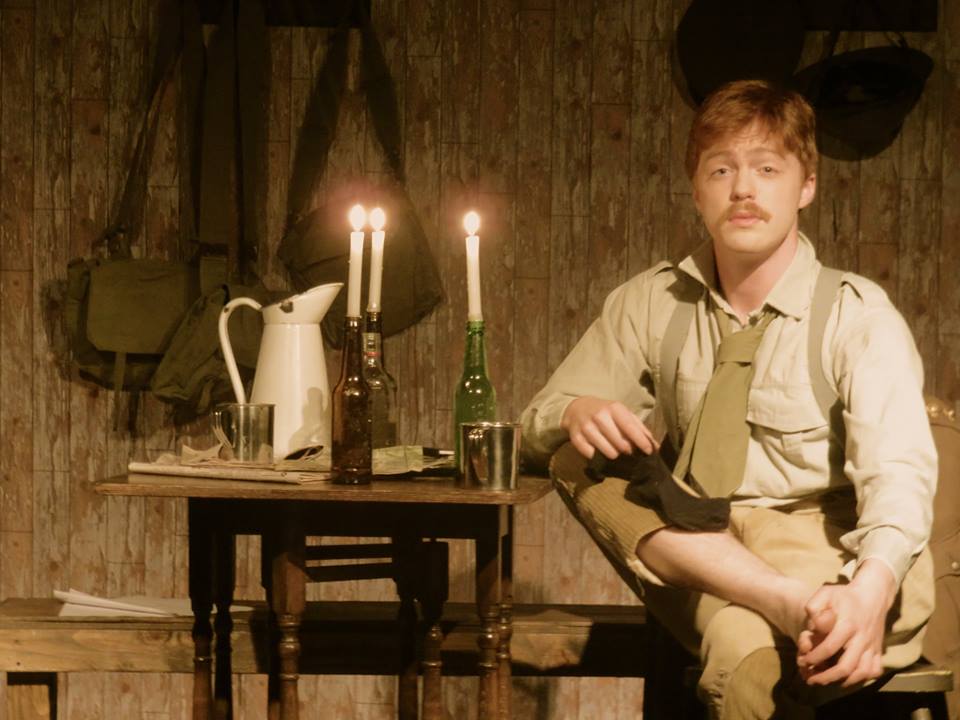 With 2016 marking the centenary of the Battle of the Somme and with Remembrance Day fast approaching, the DUCT’s production of Sheriff’s Journey’s End presents its own act of commemoration. The entire play is set in an Officer’s dug-out on the frontline as British soldiers await an imminent German offensive. The all-male cast and intimacy of the venue, staged in the City Theatre, perfectly recreated the sense of claustrophobia and unbearable strain these men were experiencing, acting as a microcosm through which to explore the greater context of war.

George Ellis gave an incredibly powerful performance as Stanhope, the whisky-soaked Captain who has been in the trenches for nearly three years. He captured the strain of dualism which runs throughout the entire play: the great disparity between thought and deed, appearance and reality. Constantly urging his Officers to keep ‘sticking it’ and behave as a ‘decent man’ would, he admits at one point that he himself would go ‘mad with fright’ if he wasn’t ‘doped with whisk’. The audience start to see the crippling effects of war neurosis – what Robert Graves described as ‘the inward scream’.

A great deal of the play is concerned with the trivial, opening with a prolonged inspection of a sock and maintaining a steady stream of conversation about food and rugby. This was often a source of humour; at one point Trotter (played by George Breare) exclaims that the war is bad enough as it is, but a ‘war without pepper, it’s bloody awful’. And yet this also illustrates the inadequacy of speech as a medium to convey the horror of war. The pathos of the situation, where each man is trying ‘to forget’, is underscored by the sense of inevitability, ‘Tick-tock goes the clock’- the hurtling of time towards their ‘journey’s end’.

The arrival of Raleigh, fresh out of school, to the Officers’ dug-out presents a strong contrast with Stanhope’s disillusionment. Harry Scholes’ performance brought to the fore Raleigh’s veritable excitement as he describes everything as ‘simply topping’. At school with Stanhope, his former ‘skipper of rugger’, Raleigh’s hero-worship questions the very nature of heroism in such a war. Journey’s End’s appearance in the late 1920s corresponded with two incredibly successful pieces of World War I literature, ‘All Quiet on the Western Front’ and ‘Goodbye to All That’, both of which explored the futility of war and the devastation it wrecked on a generation of young men. Similarly Journey’s End veers towards an offensive upon which day 38,000 British soldiers met their deaths.

Each actor excelled in their role and George Breare’s decision to both direct and act (he played Officer Trotter) in the play, although an unusual one, didn’t impede the overall effect. In fact, it seemed to cleverly reflect the notion that an Officer is both director and participator in the suffering. Despite the many seemingly pointless conversations about apricots, pepper, bacon and rugby, at no point did this play lose sight of where it was heading. Raleigh, in his very first conversation with Osborne (played by Joe Campbell), observes that it is ‘almost as if we are waiting for something’. This ‘something’ is the German offensive that later became known as Operation Michael; however, it can also be viewed as a plea for recognition. Service to the community is a heritage, a line of continuity from those serving to those served. At the end of the play, all the Officers lined up at the front of the stage, each man holding a candle. In a very powerful evocation of their mortality they blew them out together, thus plunging themselves and the audience into darkness. It is now up to us, at the going down of the sun and in the morning, to counter the dark with the light, and to remember.