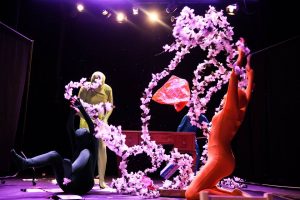 I can tell you now you will be hard pressed to find a show in Durham, or anywhere else for that matter, that is quite like LTC’s production of Tom Basden’s ‘Joseph K’. For good or for ill, this play is weird, and judging by the audience reaction it’s proved decisive too. Joseph K follows the story of a man who has been arrested without explanation on his 30th birthday, dragging a classic Kafka novel kicking and screaming into the 21st century. The already relentlessly surreal comedy inherent within the script coupled with Qasim Salam’s direction and creative vision have produced a spectacle filled with raucous laughs, impressive visuals, and (for me personally at least) a good amount of sheer confusion. Both Tanya Agarwal as tech director and the producers have brought Salam’s eclectic and striking vision to life in what felt like a pretty smooth opening night.

From the off the audience are confronted with oddities to behold – Entering the auditorium to see a lone cast member, dressed head to toe in a black morphsuit, playing the guitar quietly set the tone of the evening rather well. Having the cast (Except Barney Mercer) dancing around the stage moving set and props to music, each in a different colour of morphsuit, was an amusing sight to open the play, and director Qasim Salam must be credited greatly. The ability to turn scene changes, something so often berated for being cumbersome and distracting, into something that has an audience in stitches is impressive. For me personally however, I felt the novelty somewhat wore off as the scene changes grew increasingly frantic, and seemingly increasingly unsafe. There were a number of times cast members looked like they’d fall and injure themselves, and I feel it’s only fair to warn audiences that there is a splash zone. Not of liquid that is, but of various items of set – I was at one point hit with a bin thrown into the air, which I’ll be honest rather hurt. Be warned.

The whole cast deserve great praise in my opinion. Every one of them performed fantastically. Mercer, as the eponymous Joseph K had perhaps the hardest job – that of the much maligned straight man. He sensitively captured the degradation of Joseph throughout the play, and although I felt once or twice moments of big emotion were hit too quickly as opposed to being built up to, Mercer portrays a number of emotional outbursts and climaxes that manage to palpably affect and silence the audience – an impressive thing to do in a play that is so often so silly. The first scene felt a little stilted (yet by no means without laughs) be it due to nerves, lines, or simply that is was the intention of the scene, but after this Mercer and the play as a whole felt much more settled.

Every one of the morphsuit clad ensemble played their parts with aplomb. Each had the audience in fits of laughter at least once, and picking standout performances and moments is not an easy thing to do. They brought life and distinct differentiation to every part they played, and both cast and director must be praised. There were however a few moments when silliness seemed to get the better of them – corpsing is an unfortunate occupational hazard, but seemingly trying one’s best to make other actors laugh, particularly when there are characters on stage trying to perform more serious portions of dialogue, is both distracting and undermines the professionalism of the production.

Joseph K has proved a very difficult play to sum up. It seems to have proved decisive, and in truth perhaps wasn’t entirely my cup of tea. At times to me the play felt bizarre purely for the sake of being bizarre, and there were moments where things became too frantic, silly or busy onstage for me to follow or feel truly invested in. This said, I found a great deal of genuinely hilarious moments (and a few rather touching ones to boot), a show without a single weak link or performance, and a visual spectacle the like of which I’ve never seen before in Durham, perhaps anywhere. Whether it proves entirely to your taste or not, I thoroughly recommend you get down to see LTC’s latest offering. And I don’t say that because I feel I should, or because I feel it’s customary, I say that because Salam and his whole team have created a show that is in my opinion one of the most innovative and unique performances I’ve seen in Durham, and it really isn’t one you’ll want to miss.