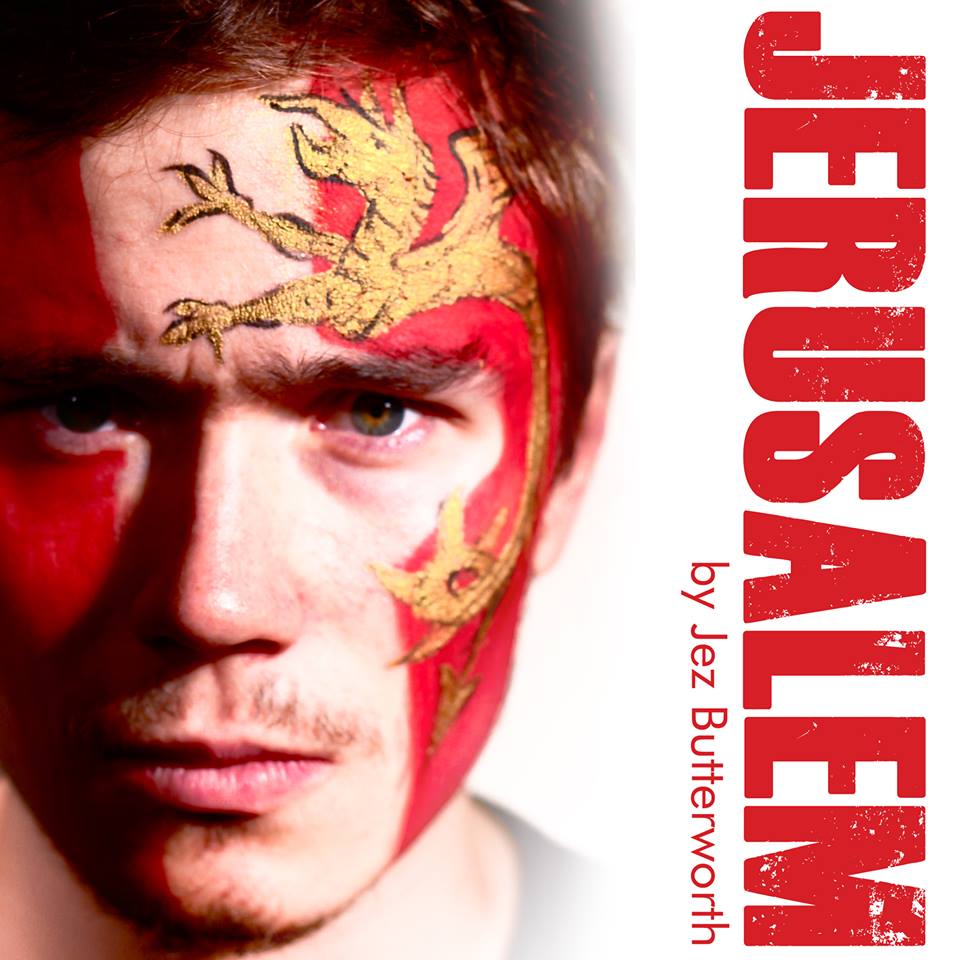 As the curtains open upon ‘Jerusalem’ you could sense the audience’s delight as a stunning set was revealed. A disarray of vodka bottles, a dismantled toilet, a battered sofa and a caravan positioned upstage was all topped off with a stage turfed completely in grass. As we took our seats this all mixed with the smell of cigarettes and completely transported the audience into the dysfunctional world of Johnny ‘Rooster’ Byron and his motley crew.

Byron, played by Michael Forde, a drug-dealing, outlandish storyteller and social outcast who lives in a caravan the midst of a wood in South Wiltshire, forms the central focus of the play. The first third of this three hour performance introduces us to Rooster and his anarchical friends. Joe Skelton offers a fantastic performance as ‘Ginger’ Rooster’s loyal side-kick. His naïve simplicity creates painfully funny moments as he interacts with some of his more ‘worldly’ associates. Hugh Train’s performance as ‘Lee’, the teenager who plans to leave for Australia in search of ‘spiritual conquest’, provides copious amounts of humour through sincere delivery of lines and comic timing.

Indeed, dialogue and comic timing amongst the whole crew was largely impressive especially given the intricacy and rambling nature of lines in Jez Butterworth’s script. There were a few moments when lines were frustratingly rushed or stumbled over, but for the most part, the performance felt incredibly professional and focused. The ensemble were superb in the moments of hilarity and were also able to effectively portray the more moving parts of the play.

Particularly memorable was the moment when Byron’s young son enters stage accompanied by his mother, played by the powerful Georgie Franklin. The scene is startling, one of palpable tension as the outlandish legends, which Byron constructs around himself, break down and the audience is confronted with a new and difficult aspect of his character as the negligent father. This reached its climax in the last thirty minutes of the play in which Byron’s identity becomes darker and increasingly threatened. Michael Forde as Byron, particularly in these moments, offers a towering performance especially in his beautiful monologue in the closing scene, which shines a mythic poignancy on the play about heritage and the definition of ‘Englishness’. Forde’s incredible energy and commitment to the role should be highly commended.

At times his particularly strong performance showed up certain weakness in some of the supporting cast. Callum Kenny’s depiction of ‘Wesley’ another member of Byron’s posse, succeeded in providing comic moments, such as his reluctant performance of his newly learnt Morris dancing, although his performance was at times stilted, with awkward line delivery and occasions when his regional accent seemed to trail. The same can be said for Cecily Money-Coutts’ performance of ‘Pea’, who struggled with the accent and the pacing of the comic material.

These minor issues however did not dampen the effect of this thrilling piece of theatre. Director Matt Dunn should certainly be commended on his achievement in doing justice to such an emotionally and intellectually complex piece of drama. I strongly urge you to go.