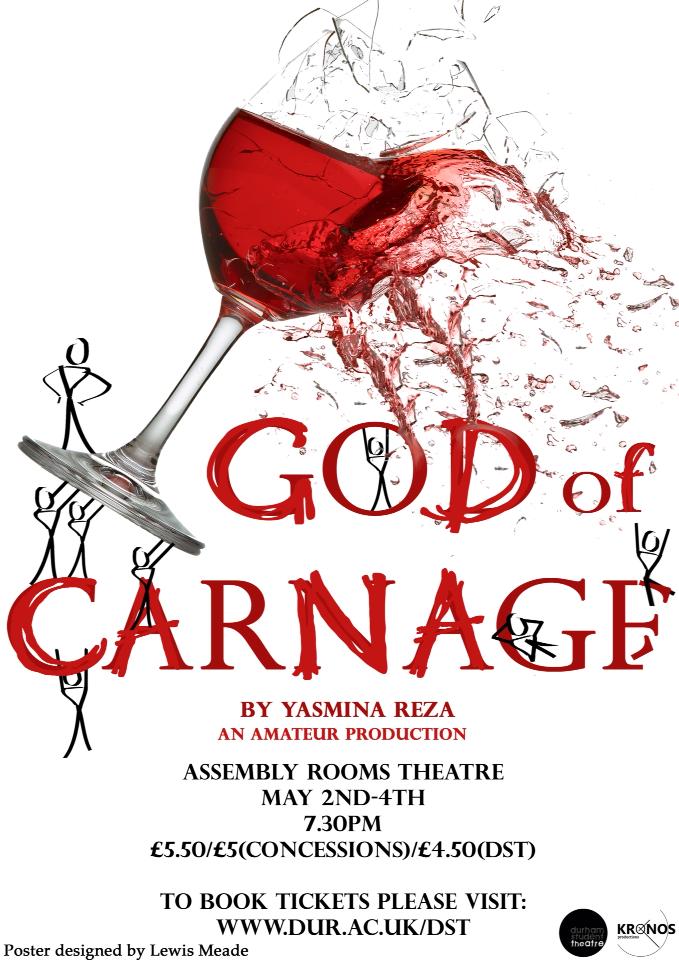 “This is the unhappiest day of my life”. That, I can say, is positively untrue.

From the off, I think I should make it clear that this review will be glowing. Almost childishly so. In fact, it might be rather annoying that, as a critic, I cannot give constructive criticism or find some fault to work on. This is because Kronos’ latest production, God of Carnage, takes an excellent script and runs rings round it to provide an excellent night of comedy at the Assembly Rooms.

Centred on the meeting of two sets of parents after their 11-year old children have been caught in a fight, the crowd watches as cautious reconciliation falls apart, and the adults on stage become as bad – if not worse – as the children they are there to talk about. Who knew that watching adults act like toddlers – admittedly, fuelled with stress and plenty of alcohol – could be so much fun?

The initial awkward snatches of polite, middle-class conversation give way to a tidal wave of aggression and straight up vulgarity. Snide comments and downright unpleasant insults – all of them were lapped up by the audience. All four leads should indeed take a bow and a half, as each of them delivered heavyweight performances and carried the load equally; not one was overshadowed, which is quite the achievement with such a small ensemble cast.

Alex Wingfield turns in a mightily impressive performance as Alan, and it is an absolute wonder how he did not once break during his deadpan presentation. He is every inch the absolute arsehole, even down to the sharp three piece suit. When you find yourself agreeing with him, drawn in by the legal charisma that is impeccably communicated, you begin to hate the character even more. Applause must be given to Wingfield for maintaining a snobbish attitude whilst also being, at times, a calm voice of reason. Balancing the two must have been difficult, and so utmost appreciation must be given.

Playing his wife Annette, Elissa Churchill made the character’s transition from immaculately kept to unravelling ball of stress and tension look effortless. You can go on and on about “excellent characterisation” and “becoming the character”, but it’s incredibly difficult to not say such things in the case of Churchill’s portrayal of Annette. She just was Annette; there is no other way to say it. At times, she was funniest when actually saying nothing at all. Small nuances such as a sip of coffee, a grasp of pearls, a tensing of neck – it was hard not to snigger at such things, especially when in reaction to her husband’s pretentious babble. Watching her breakdown is quite the sight to behold.

The two wives had the best chemistry on the stage, and watching the two go from hating, to siding with each other, to hating once more, is a joy.

Speaking of the other wife, Grace Cheatle’s act as the holier–than–thou Veronica was truly fantastic. At the open, there was a worry that she had been saddled with a lame and boring character, but as the play develops you realise that is all part of the surprise of her role. Indeed, Veronica provided some of the biggest laughs of the night, and it would be unfair to give all the credit to the script. Cheatle epitomises what it was to be a woman in an unhappy marriage, using pitch perfect vocal delivery and comic timing to become a figure of pure rage. Dressed as a prim and proper middle class, cultural know-it-all, seeing her become a total mess was achingly funny.

And what of her husband? Michael Forde was a tour-de-force as the household goods salesman. Initially an inherently likable, a bumbling fool, we watch as Forde takes his character to the brink of depravity. His timing infallible, and his reactions to THAT criminal act, meant that this was another fantastically comical performance. The best part is you never know how you feel about the character, as the moral ambiguity put across by Forde is what makes his rendering of the character unique.

Although it would be a bit of a back breaker during this heavy revision period, were the performance running for longer I would definitely advise a night down at the Assembly Rooms to see God of Carnage. You wouldn’t regret it.