‘A gripping hour of physical and mental exertion’

Shelagh Stephen’s play ‘Five Kinds of Silence’, adapted from the radio play of the same name, explores themes of control and domestic abuse. It follows the psychological dissection of mother Mary (Elle Morgan-Williams) and her two daughters Susan and Janet (played by Sarah Cameron and Elana Kaymer respectively) as they recount the abuse of their father, Billy (George Ellis) in a series of fragmented memories, culminating in their eventual murdering of him. Fourth Wall’s shamelessly visceral production captures these challenging themes in an interesting and ultimately effective manner which consistently unnerves its audience.

Directors Hetty Hodgson and Damson Young root the domestic environment from the outset through their minimalist set consisting of white walls covered in generic family photos, exploring (as Stephen does in one particular section) how darker truths are hidden behind superficial guises. Hodgson and Young have combined highly choreographed physical sequences with moments of naturalism to great effect. Despite some sequences lacking in synchronisation at times (an element of the production I’m sure will improve as the run progresses), the choreographed memory sequences, set to an ethereal underscore, enhanced the devastation of the content they illustrated. Much of this choreography took the form of a collection of sharp linear synchronized movements, meaning that the series of fractured accounts which formed the narrative structure risked appearing rather one-note at times, and I feel the piece might have benefited from a different flavour of movement in places. However, there were moments of juxtaposing stillness, such as Morgan-Williams’ heart-breaking recount of self-harm, which Hodgson and Young (rightly so) chose not to choreograph, leaving me quietly stunned. Furthermore, some of the plays key moments, while ultimately still effective, could have benefited from a more gradual tension-build to fulfil their dramatic potential. In the play’s opening in which we see the girls shoot Billy, it seemed to happen all too suddenly, making the event itself slightly underwhelming. 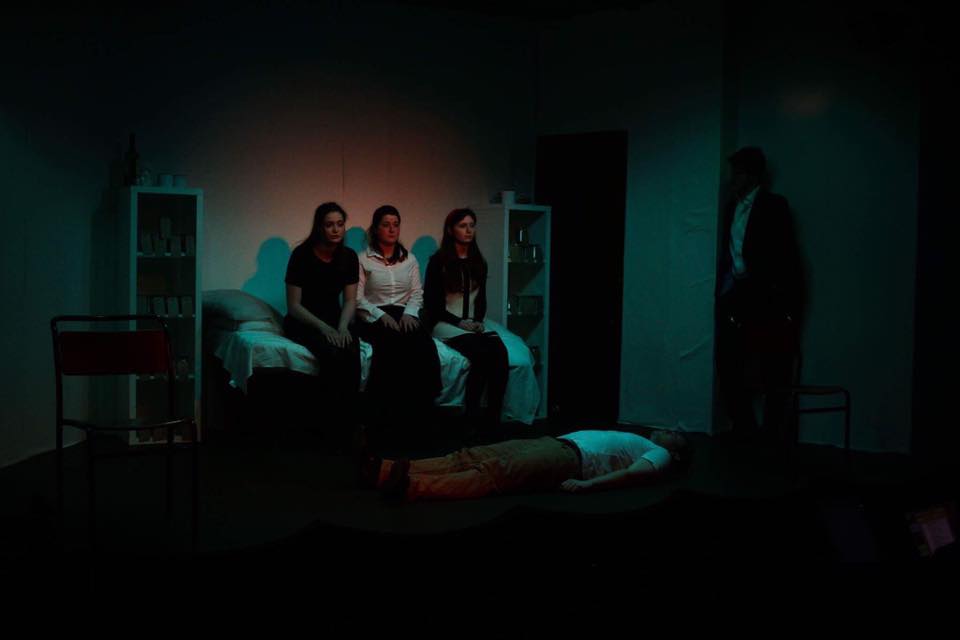 Each of the five-strong cast gave commendable performances and, whilst they each shone individually at moments in the piece, equally impressive (and integral within this style of theatre) was their presence as an ensemble. George Ellis assumed a menacing stillness in his rigid upright physicality throughout (reminiscent of his military background which governs their domestic life) and the decision to externalise the passively-sinister presence of Billy within the girls’ minds by having Ellis on stage throughout, groping and caressing them in scenes of interrogation for example, worked well. Whilst he was suitably disturbing in depictions of abuse, he managed to retain some forgiveness from the audience as he showed glimpses of humanity when reflecting upon his own abuse as a child. However, I thought Ellis’ desperation in these memories could have been emphasised more to fully establish a key theme explored throughout; that abusers often begin as the abused. Olly Hill multi-rolled effectively, transitioning seamlessly from interrogating police officer to genial psychiatrist with nuanced physical and vocal shifts.

Elle Morgan-Williams inhabited the role of Mary with skill and her maternal presence was clear throughout. Sarah Cameron and Elana Kaymer were successful in their portrayal of the frail, emotionally vulnerable daughters. Particularly enjoyable in their performances was when the actors brought moments of dark humour, an element of the script Hodgson and Young express fondness of, which broke-up the plays heavier themes. The most captivating moment of the piece for me, however, came nearer the climax when Susan (Sarah Cameron) admits to having sexual dreams about her father. In this moment Cameron managed to impressively convey the dichotomy between the sexual passion her character felt at the time and her regret in the present as she is predatorily held in Ellis’ arms. This, set against Andrew Cowburn’s steely green lighting state, resulted in a distressing and visually arresting moment of palpable sexual and emotional charge.

‘Five Kinds of Silence’ promises a gripping hour of physical and mental exertion. Although some sequences are perhaps in need of slight fine-tuning, the piece is rife with detailed performances and effectively unsettling set pieces and is a directorial debut Hodgson and Young can be proud of.

‘Five Kinds of Silence’ is being performed in Durham City Theatre from the 23rd-25th of February.

Tickets can be bought below.