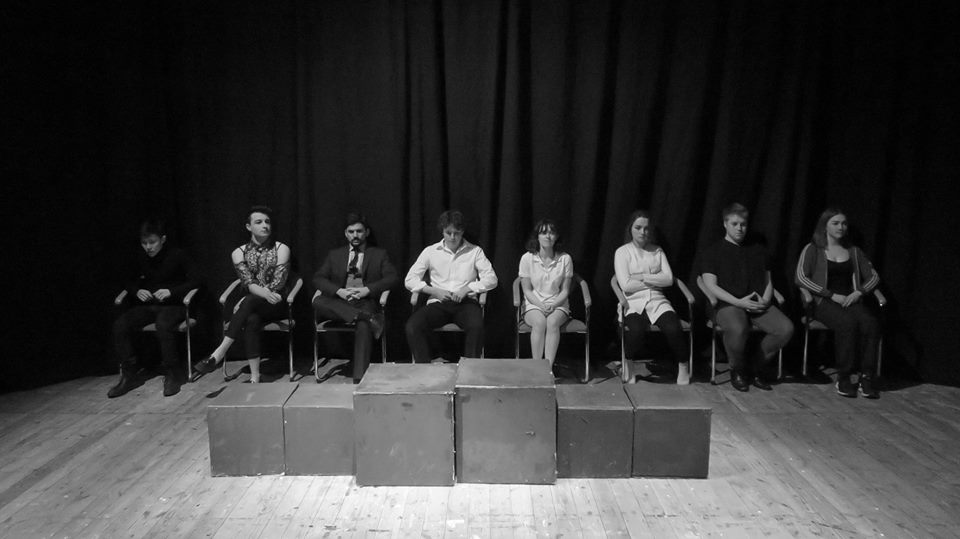 As a lover of both performing and watching dramatic monologues, I know that the best ones all have one thing in common: speaking to the audience, rather than at them. This effect is the most crucial, but also most difficult, element to achieve. Not that the performers of HBT’s ‘Eight’ let on. Each monologue was seamlessly immersive and transcended the infamous ‘fourth wall’ of theatre, from the quirky decision of having the audience vote on the order of the monologues, to the intimate delivery of each splendid piece. At one point, Jasper Millard delivers the powerful line: ‘it was never his world, you see, it was mine’, and the audience are left with the very same sentiment.

I enjoyed the novelty of voting for the order in which the performances should unfold but, as a concept, I’m not sure it added anything to the dramatic narrative. It was a testament to the acting, rather than to this artistic idea, that the narrative was told with such beautiful intricacy. I kept forgetting that, whilst each actor was performing, the others were there, sitting stock-still behind them; to have had reason to draw my attention to them would have disastrously popped the bubble that the audience was held in but, thankfully, this was not allowed to happen.

The talent of these eight actors enabled the re-telling of a suicide to have moments of pure hilarity, Christmas to have heart-wrenching sadness, and the London Bombings to become a question of a 10p loan. As is it, the arrangement of the order will be different each night, however I suspect the stand-out performances will remain consistent. For me, it was those of and Jasmine Price and Hamish Lloyd Barnes. Barnes’ boyish bounce and masterful accent changes meant he appeared impossibly natural at the role of fresh-faced gap-year taker, whilst Price’s manipulated a physique that was both petite yet imposing, and eyes that were lifeless yet entirely compelling, to huge effect.

As a native of “t’up Narth”, I can vouch for the strength of Mally Capstick’s Scottish lilt, and Adam Evan’s Preston twang. Whilst I am in a weaker position to comment on trans-Atlantic accents, Qasim Salam gave a solid and convincing performance. However, it wasn’t just a multitude of accents the actors delivered, but also a multitude of voices. Behind each individual’s narrative, the audience were told the implicit stories of a multitude of other unseen characters: parents, spouses, friends, children, even strangers. It was a powerful reminder that our stories can never exclusively be our own, and director Corinna Harrison handled the subtlety of this message with commendable deftness, retaining poignancy without straying into over-sentimentality.

Issues of gender and sexuality were tackled head-on with strong performances from both Tyler Rainford and Jasper Millard. Furthermore, Carrie Gaunt’s tennis-themed sexual fantasy was astonishingly memorable. Her outstanding acting versatility, from shouts of orgasmic pleasure one moment to demure tea-sipping the next, the girl is an absolute star and it is impossible to guess what she will do next.

The staging was effective in its minimalist starkness and, combined with a very sparing use of props, prevented any faff from distracting from the striking performances. I did feel, at times, that spacing might have been used to a greater effect. There were wonderful moments, such as in the performance of Lloyd Barnes, which were heightened (no pun intended) by the energetic changing of levels and I felt that this could have been used more frequently to add further diversity to the conveyer-belt of monologues. Despite this, the performances never seemed ‘samey’ or lacking in engaging material.

As is crucial to monologues, the use of sound effects and music was kept to a bare minimum so, whilst they enhanced the performances on the odd occasion they were used, there was never a sense that the actors were vying for their voice to be heard. However, I personally thought more could have been done with the lighting, given that the theme of illumination is that on which the whole show is hung.

Skilfully directed and masterfully acted, this show is unmissable for fans of character-based theatre. Without question, my favourite line of the show belonged to Capstick: ‘many people will show them real life…you must show them magic’. I think it’s safe to say that ‘Eight’ did both.