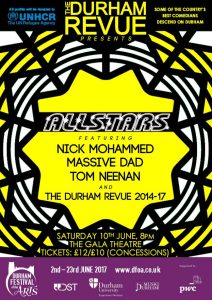 ‘The Revue held their own just as well (if not better) than their professional guests’.

Last night I had the pleasure of seeing ‘Allstars’ at the Gala Theatre, The Durham Revue’s annual reunion show featuring past troupe members of yore. ‘Allstars’ kicked off with the 2016-17 troupe alongside a handful of recent Revue alumni performing some of their greatest sketches from the last 3 years, following appearances from special guests Tom Neenan, Massive Dad, and Nick Mohammed. With a reputation for being the best student comedy Durham has to offer, Allstars promised a night of quick-witted puns and hilarity; it certainly delivered.
Before I go on to saying nicer things, I must admit that to begin with I was concerned that ‘Allstars’ wouldn’t live up to the hype. The evening began with a dim projection against the back curtain of the stage featuring a mock interview with today’s troupe. Aside from the fact that the video could have done with being brighter, the material in the video was generally lacking in sustenance and struggled to force any real laughter from the audience, sparing a few chuckles at a cheap joke about Mike Bedigan’s height. The performers took a while to warm up after this rocky start, with a few missed cues here and there in the first 15 minutes or so; this was my first time seeing the Revue trying to fill the Gala stage, comparatively humongous compared to the comfort and intimacy of smaller venues such as The Assembly Rooms, and I feel that trying to overcompensate for the larger space dampened the cast’s energy. Combined with what I assume was less rehearsal time for the returning members, this led to some slow pacing and lost jokes at the start of the show. However, after these initial hiccups, the troupe was back in full swing and I found myself laughing harder than ever.
Despite having seen most of the sketch material for the show before, it really is a testament to the Revue that I still found the bulk of these absolutely hilarious. A couple of my personal favourites have to be Shots Fired and The Obnoxious Twat Carriage- and, of course, the Bag for Life sketch, in which Andrew Shires somehow manages to make an entire audience feel genuinely distraught over the loss of a plastic bag. I actually shed a small tear. Particular mention must go to Tom Harper, whose physicality is always impeccable (particularly in regards to his shockingly wobbly arms) and returner Abi Weinstock thanks to her wonderfully malleable facial expressions and strong comic timing. Luke Maskell also excelled and held a brilliant energy throughout the show, but some jokes were lost due to his tendency to yell his lines.
Of the older material, I laughed as hard as the performers did corpse at a sketch in which Ambika Mod played a robot/grandma, one of the better utilisations of her trademark deadpan stare that I’ve seen of late that even had Bedigan stifling laughter beside her. I was also a huge fan of the absurdist slapstick masterpiece that was the Frosted Flakes sketch, featuring Broccan Tyzack-Carlin hopping around and singing (badly) in a Tigger onesie while returner David Knowles desperately shovelled breakfast cereal into his mouth. My one issue is that at least three sketches involved dumping copious amounts of food onto the floor, leaving not just a presumably disgruntled cleaner but also a few awkward crunches throughout the show as performers trotted over a mound of popcorn that was sitting stage left after the first 5 minutes.

All of the performers from Revues old and new were outstanding, but my commendations above all else go to David Knowles, who upheld a magnificent stage presence throughout the show and somehow brought the audience to hysterics with every single line. My main criticism of the Revue’s sketches is that, while the main body of their sketches are undoubtedly side-splitting, the ends of the skits tend to lack strength- this is perhaps why shorter sketches such as the jousting scene between Knowles and Bedigan were some of the funniest.
Following the interval, we were met with the Revue alumni and special guests for the night. Kicking it off was Tom Neenan with his spin on an Attenborough mockumentary, an already used trope that wasn’t really funny enough to justify. While some of Neenan’s jokes are incredibly clever and could have the crowd in stitches at times, they were far and few between. Neenan’s fast-paced speech meant that gags could sometimes pass over the audience before they even had time to process them, and this also didn’t help his tendency to stumble over his own words, slowing the pace of the scene. Neenan’s mockumentary lacked any real sense of direction, and the abrupt conclusion to the skit was pretty disappointing.

Next up were Massive Dad, the all-female sketch troupe comprised of Stevie Martin, Tessa Coates and Liz Kingsman. Beginning with a few Durham-tailored jokes to warm up the student-heavy crowd, the troupe moved on to perform a small selection of strong sketches that rivalled the Revue’s best. I can’t really go into too much detail here because I actually have nothing bad to say at all- Massive Dad were straight-up fantastic.

Headlining the night was Nick Mohammed as Mr. Swallow, an absurdly weird comedian/magician/I-don’t-know-what-else act that shouldn’t have been particularly funny, but… was. Mohammed began with a few typical stand-up-style jokes before moving on to solve a Rubik’s Cube in about a minute and memorise an entire deck of cards in even less time. This is of course incredibly impressive, and while I did laugh at Mohammed’s eccentric stage persona, I do have to question where the actual comedy aspect of his act was supposed to be.
All-in-all, barring a few tech mishaps and some first-night mistakes, Allstars was a delightful evening of comedy. Unfortunately, being a one-night performance, you won’t be able to see the Durham Revue perform again for a while- but given that they held their own just as well (if not better) than their professional guests, you’d be stupid to miss out next time.