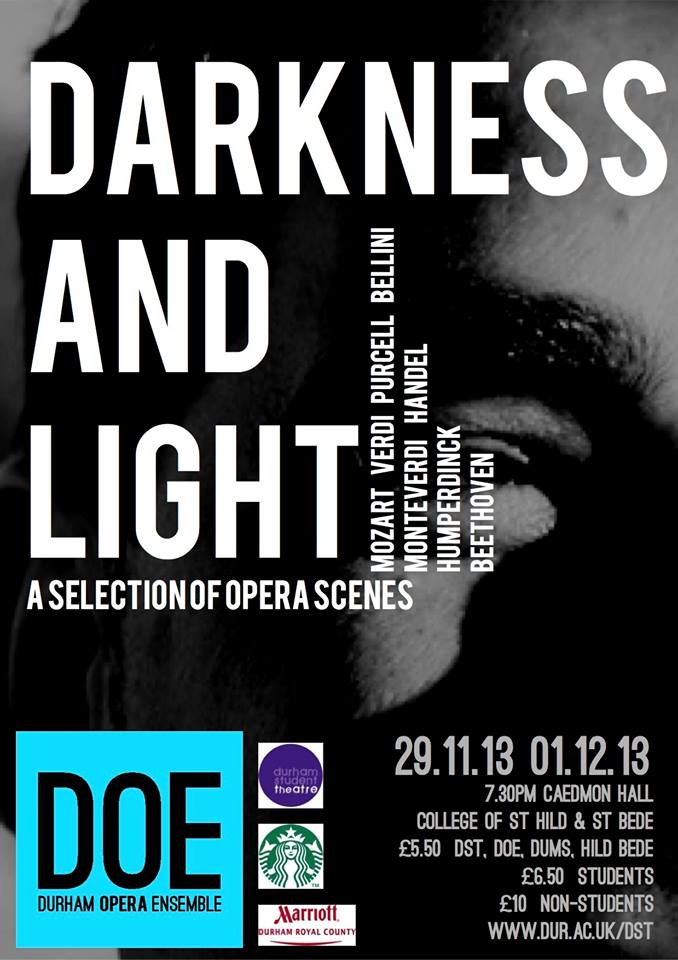 Short and sweet was the best way to describe this production: but for all it lacked in length it made up for in quality and complimentary wine. ‘Darkness and Light’ is a whistle stop tour of opera through the ages and, despite the journey being a relatively brief one, you still come away feeling like you’ve seen a lot.

As a sucker for a good structure, the ‘Darkness and Light’ theme, based on a hymn by Francis of Assisi, was both appropriate and engaging as the scenes switched rapidly from happy to sad; intense to comical and, well, darkness to light – at least I think so, as they didn’t always sing in English. Joking aside, the hymn’s integration into the scenes was top notch and, indeed, the scene set in the hall – with everyone in black tie – proved the perfect arena for such a classy performance. From the moment the orchestra struck up, there was a sense of authority about this production which was a pleasure to the senses – mainly the ears.

Some of the acting, however, left much to be desired. When the very able singers crept onto the stage at the start, portraying witches, it was more than a little bit awkward to witness: the cast’s vocal talent was evident, but their acting skills were not. Also, the final scene contained some rather interesting facial expressions to say the least but, gurning and a couple of out-of-place Mo-vember efforts aside, the performance was visually impressive.

Particular credit needs to go to the lighting which was absolutely stunning in the Monteverdi scene of act one: and was aided further by the serenity of Ellie Rosser-Symth and Portia Cantwell. In this scene, and others, the light and darkness theme was brilliantly reflected by the staging and what was simultaneously conveyed, by the contrasting intensities of the opening two scenes, was equally commendable. The first presentation of darkness was noisy, with the stage cluttered with cast members moving around jerkily, and the second, representing light, was stripped down to the bare minimum with much more fluid movements. Such antitheses were wholly effective, and credit must go to the directors for pulling it off so successfully.

The highlight of the evening was the piece by Handel in which Bridget Tomlinson was truly excellent. Not only was the singing beautiful, her facial expressions really engaged with the conflicting emotions of the extract. Other impressive features of the production included the orchestra in general, the gradual build of the finale and the female harmonies in the Purcell scene.

Directors Ambrose Li and Rebecca Meltzer certainly had a lot to grapple with in presenting so many periods and genres. The tight structuring of the scenes, integrated into Assisi’s hymn, was a masterstroke however, and gave the production an accumulating force which exploded in the final scene. Although very short, the performance whets the operatic appetite for what the Durham Opera Ensemble has to offer during the rest of the year.