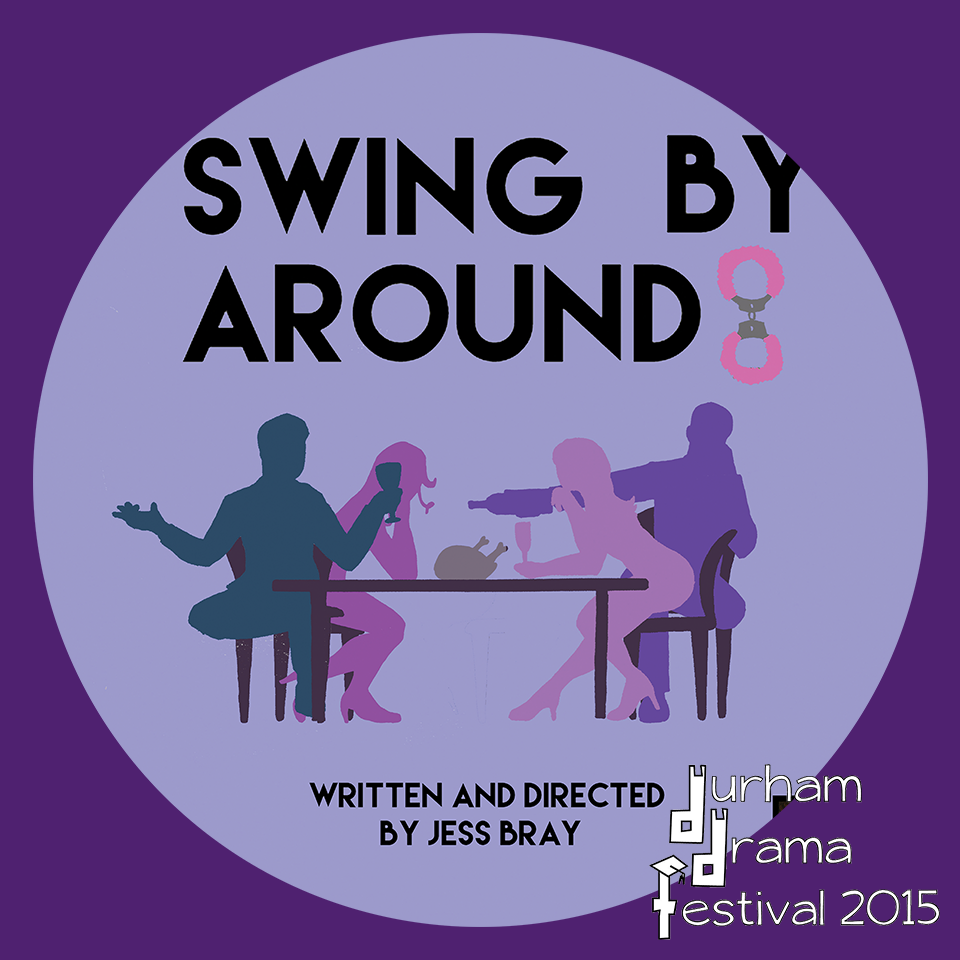 “Swing by Around 8” by Jessica Bray

If you haven’t guessed already, “Swing by Around 8” is a play all about the joys and downfalls of swinging. With such a scandalous subject, you are led to expect a lot of laughs, and you are certainly not disappointed. Confusion lies at the heart of the play, with neither couple absolutely sure about the others’ motives or where the evening is heading; something the audience has the privilege to share in.

The play is an insightful domestic parody, combining moments of humour with some thoughtful revelations that hit close to home. The amusing one-liners and barely concealed innuendos fly thick and fast throughout, provoking eruptions of laughter from the audience and constantly lifting the mood of the play. Attempts at seduction, especially by Annie Davidson (Katherine), are brilliantly pulled off and expertly timed, made even more enjoyable by the possibility of misinterpretation.

Recognition must also be given to the clever use of the stage space, especially when Matt and Katherine have their side-stage conversations. With the use of a simple spotlight they create a whole extra room without having to bother with clumsy false walls that would take up space and restrict movement. The direction of the cast in general is impressive, and they make full use of the limited provision available so that any constraints are unnoticeable.

The acting of every member of the cast was of an extremely high level, each of them embodying the nuances of their character with effortless expertise. Rory Barnes (Matt) is worth special mention for his ability to portray serious moods of jealousy, insecurity and tenderness, then immediately spring back into his almost farcical role without missing a beat. Eliza Cummings-Cove (Amelia) is also fantastic in this production, fully embodying her character of a difficult, drunken woman who you still manage to feel empathy for. Her on-stage conflict with her boyfriend Elliot (Jack Fenwick) is hilariously bitter, not relying on full-blown domestic arguments but rather constant jibes and looks that have the audience on edge.

“Strike” is based in a speed dating agency just before Valentine’s Day, a time of stress by anyone’s standards. The majority of the play monitors the relationship between Suzie (Shona Graham) and Rick (Adam Evans), although the occasional appearance of the eccentric, verging on psychopathic ‘man child’ Ed (Michael Yates) provides brief respite from the mundanity of office life. The play is enjoyable to watch, containing humorous moments and good acting, but it lacks the punch that would be expected from a production that has such a clever theme of deception running through.

The play loses its momentum at times, suffering from an interrupted flow that isn’t the fault of the actors but rather the slightly misjudged script. It’s clear that they are trying to reflect the awkwardness of social situations, and they do this with success, but there are occasions when the attempts at awkwardness become too realistic and verge on stilted. However, in general the play moves along nicely and the story line is given depth by the unexpected plot twist.

The innovative layout of the production is to be applauded, with the two desks on each side of the stage functioning as the two sides of the table. This overcame any problems of faces being hidden and allowed the audience a full view of the actors as they stared out from the stage. Both Rob Collins (Man) and Zoe Coxon (Woman) took full advantage of this setting to show off their terrific acting skills. Coxon was an utterly convincing and slightly sickly dating novice whilst Collins portrayed the smug seducer with terrifying accuracy.

“Strike” is worth seeing for its high standard of acting, impressive use of the stage and unexpected plot twist that gives the play a new breath of life. However, it could be significantly improved with a more interesting approach to the themes it presents and a script that runs slightly smoother. 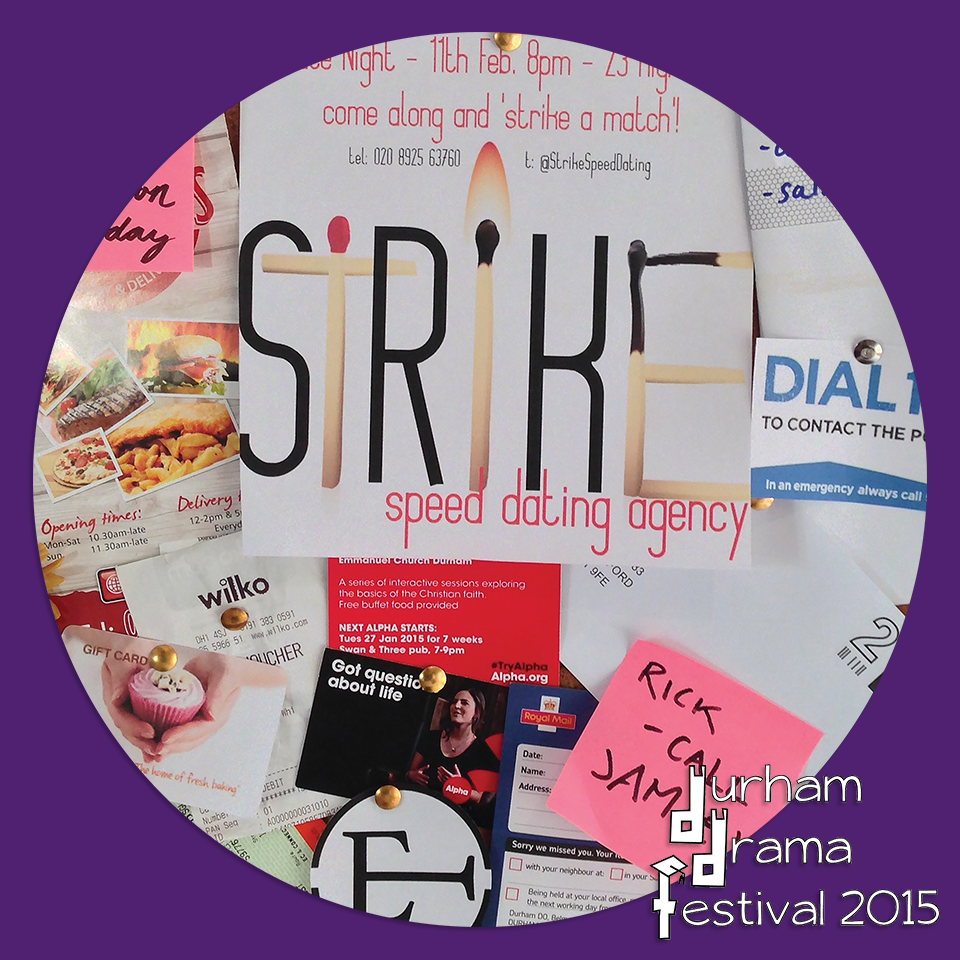 “Killing Time” by Nikil Vyas On the surface “Killing Time” is a play about three psychopathic serial killers living in a house together – surely the ideal premise for a comedy – but very soon you realise that it raises a number of important and serious questions that it is rare to encounter in a comedy. From discussions of chance versus predestination to the consideration of the futility in modern society, “Killing Time” manages to combine complex philosophical issues with sparkling wit and all in the space of only an hour.

That is not to say however that this is a difficult play to watch, and it must be stressed that it is first and foremost a comedy. It is therefore crammed full of hilarious one-liners and biting contemporary references, all expertly delivered with cutting wit. The audience was in fits of laughter throughout, and the cast seemed to revel in this, responding with even more energy.

The play manages to do a lot with a cast of only four, and every actor must be given credit for their outstanding performances. Rohan Perumatantri (Stewart) buzzes with hyperactive energy, Max Lindon (Ben) presents the perfect sympathetic idiot, Izzy Mitchell (Daisy) offsets the three housemates with her own personal issues and brutal honesty, and Tom Harper (Gordon) ties it all together with his acerbic remarks and touching struggle to find meaning in his life.

Put simply, this remarkable comedic portrayal of human nature cannot be faulted. Nikhil Vyas, the writer, must be congratulated for this impressive feat and hopefully will turn his talent to writing again at some point in the future. The play deserves a sell-out performance and anyone going to see it can be sure that they won’t just be killing time, but rather treating themselves to an hour of spectacular theatre.