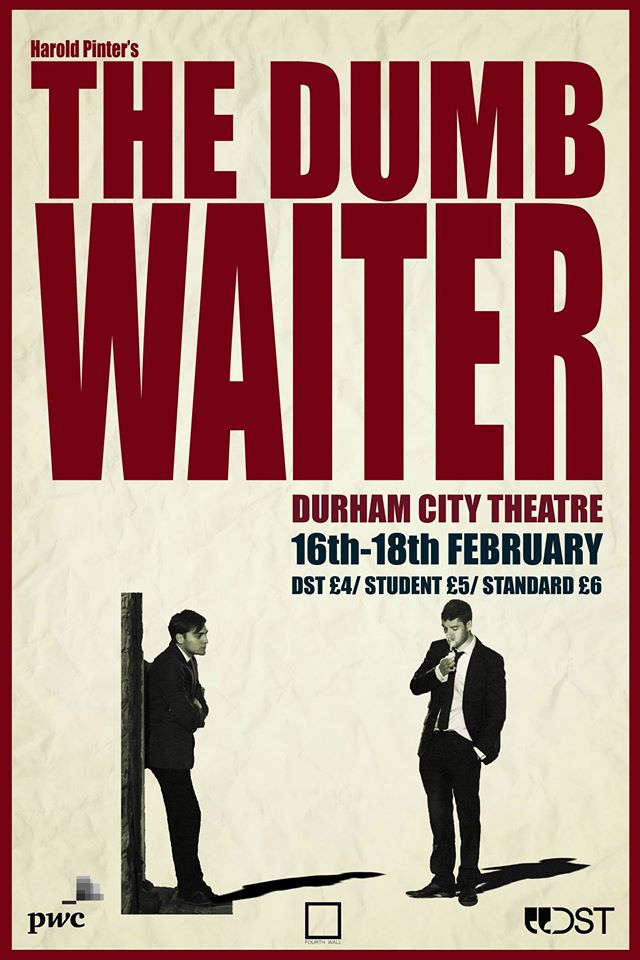 Fourth Wall’s production of Harold Pinter’s The Dumb Waiter was by no stretch of the imagination an innovative staging of a 20th century classic, shedding new light and ideas regarding the original text. However, what directors’ Fergus Neville and Jack Whitmore did offer to Durham City Theatre was a very strong, engaging and highly enjoyable production.

The directors’ stripped the play back to its conventional setting – a run down room with two beds and a Dumb Waiter. The producer Charlie Whitehead impressively managed to create a true authentic feel of the 1950’s through the set, props and costumes, which massively aided the audience in entering this captivating, but tiresome world.

In terms of the dumb waiter itself, the creative team did well to overcome this problem on a student budget. Using what was presumably a window to most productions in this venue, this team managed to convincingly visualize this part of the set, and very intelligently relied more on chilling sound effects to suggest the moving of the waiter. Yet, the actors must remember to have the hatch closed when the sound effect is used as if not, they break the illusion that was created, though this only occurred once and was of little consequence.

Indeed, Nathan Chatelier and Jamie Prowse were tasked with the very complex roles of Ben and Gus respectively and were undoubtedly highly successful in their performances. They both seemed to relish in the stillness and anxiety that Pinter places in these characters, while really detailing their individual performances. They both seemed entirely confident and comfortable in their characters; Chatelier successfully executing the brashness and domineering masculinity of Ben, and Prowse displaying the softness and naivety of Gus. They both excelled when the script warranted a drop in the pace, and they managed to captivate the audience when speaking very little. When Gus asks ‘who is it going to be tonight?’, by moving very little and naturally allowing the words to speak for themselves both actors managed to communicate multiple layers to their characters and their motivations by doing very little, something that is rarely achieved when performing Pinter.

The criticisms that both actors deserve did not in any way overshadow the successes of this production, and the hard work of the directors and the actors was clear. However, it must be noted that both actors were slightly stiff in their physicality when they stood up, or when they moved around the stage and they had a tendency to move their arms and hands in a slightly unnatural manner. This may have been first night nerves, or it may be a lack of stage experience; regardless of this, Chatelier and Prowse would benefit from relaxing and maintaining trust in their natural physicality. Also, other than the ending, which was beautifully performed, in the highly explosive and climactic parts of the play, such as when Gus asks ‘Who moved in?’, the acting seemed too abrupt, without natural build and both actors seemed out of their comfort zone. Both actors would do well to take more time to build into these sections of the play and fully immerse themselves in their performances as they so clearly did in the rest of the play.

As a whole Fourth Wall have managed to pull off one of Pinter’s masterpieces in a way that deserves great admiration and commendation to those involved. Their opening night was the start of what promises to be a highly successful run, with great talent at the helm.

‘The Dumb Waiter’ is being staged from 16th-18th February in Durham’s City Theatre.

Tickets can be bought on DST’s home page under ‘Listings’.