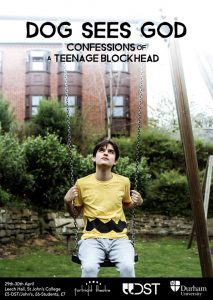 Fortnight Theatre’s production of Dog sees God: Confessions of a Teenage Blockhead follows Charlie Brown’s life after Snoopy. Bert V Royal moves away from the cartoon garden shed and towards a high school to tackle issues of homosexuality and discrimination. While the script left a lot to be desired and there were, of course, minor flaws that come with the rush of producing a play in two weeks, Sam Harrison and his team succeeded in producing a pleasant piece of theatre, if not a little rough around the edges.

Harrison’s decision to keep the production simple was very well thought through and allowed for a clean performance. Where props and lighting were used, they were relevant and effective, if not a little clumsy. While the lighting issues could be attributed to first night nerves, I would seriously question the necessity for the set changes. In a production so reliant on quick wit and energy, the awkward and long set changes seriously slowed the pace and lost the engagement of the audience. This was unfortunate and I would urge Harrison to reconsider the blocking of the production, as I feel the production could benefit hugely from leaving the set onstage throughout and simply rearranging it between scenes to fasten the pace and maintain the audience’s interest.

Moreover, much of the blocking was to the detriment of the audience’s sight lines. While the team must be praised for producing a sell-out performance, the cramped auditorium and lack of raked seating meant that many of the moments where actors were sat down were lost. This was particularly unfortunate during Victor So’s (Beethoven) piano performances which were excellently played and so vital to the plot.

Yet, the team’s hard work must be praised. The acting was generally sound throughout with Danny Parker’s performance as the arrogant and conceited Matt stealing the show. His confident swagger and energy was unfailing throughout and his anger was convincingly threatening and detestable. Emily Hardy was also impressive in her role as Marcy; she thoroughly grasped comedic timing and gave an understatedly funny performance as the sheepish mean girl. Of course, Kishmore Thiagarjan-Walker should be mentioned for his performance as CB. He moved with ease between emotions of anger and sadness and held the production together well. While he should be wary not to overdo his crying, some of his more tender moments with So and the pyromaniac, Emily Chambers, were very touching.

The entire team behind Dog Sees God should be very happy with their production. It is a play that is easy to watch and digest and gives a lovely break from being cooped up in the Billy B.