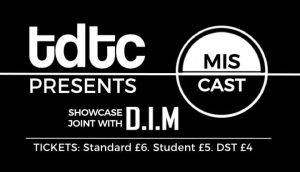 As part of the Durham Festival of the Arts, Tone Deaf Theatre Company and Durham Improvised Musical came together to provide us with an evening of entertainment in The Assembly Rooms Theatre, beginning with an hour of musical improv, and then ending with an hour showcasing some of the best talent Durham has to offer as we’ve never seen them before. This performance marked DIM’s last improvised musical of the year, and last at Durham for some of the current troupe. As such, they used the show as a rare opportunity to collaborate with the new members, cast a matter of days ago. Under the guise of audience members giving suggestions, the new troupe were brought to the stage and thus began the show.

The real suggestions they were given were, unsurprisingly, of a political tone. The location was “fields of wheat”, the title of the musical, “Can it get any naughtier?” and the song title, “That’s my tortoise”. The troupe split into two groups which would swap halfway through at a set event decided by the audience (a referendum, of course). What followed was a story filled with clever references and puns, telling of a clash of political parties on a farm vying for power, including characters Theresa Maize (Joe McWilliam), Jeremy Corn-bin (Sam Baumal), Nigel Farm-age (Finola Southgate), who doesn’t like migrating birds, and Diane Ab-bird (Elle Morgan-Williams) who can’t count, not to mention a number of “ghosts of politicians past”.

The opening song, “Strong and Stable”, was sung by the whole troupe, included some powerhouse harmonies and set the tone brilliantly for the rest of the show. A favourite part was the unravelling of it; the repeating of the lyrics “strong and stable” while all the characters broke down and went mad. I never expected to see a DIM show that doubled as political commentary.

Joe McWilliam was, quite simply, stellar. Combining a scarily good impression of the PM herself with eccentric plot points, his chemistry with Sam Baumal drove the show. Other wonderful pairings showcased the outgoing troupe’s wonderful chemistry; Charlie Keable and Sophie Forster bounced off each other impressively well as Boris John-sun-dried Tomato and the ghost of Margaret Thatcher, as did Southgate and Morgan-Williams. All three pairings were so in sync, there were rhymes over the end of their partner’s line, some seriously snappy endings to songs, and references galore (Keable even managed to quote Lord of the Rings, and it fit perfectly).

Most impressive though, was the willingness of the new troupe to just dive in. It would have been very easy, with experienced DIM members on stage and having only been part of the society two days, to sit back and just provide backing vocals. Not so. Props to Florence Russell as Ni-cow-la Sturgeon for her constant calls for another referendum, Barney Mercer for his farmer (who performed a scarily realistic rant at Theresa Maize) and Saroja Lily Ratnavel for portraying the titular Tortoise. Finally, Danny Booth’s David Cam-macaroon had no problem jumping in and improvising whole verses alone, and Rosie Weston and Rosie Dart had the genius idea of becoming the Sirens of the wheatfield, tempting the characters to “be naughty” and “run through them” – even improvising dance moves together.

The new troupe gelled remarkably well immediately. Minor stumbles were had, as is expected, but they were always recovered gracefully and with humour, with the current DIM troupe guiding the new members where needed (a favourite prompt was “Why don’t you tell me about it…through the medium of song?”).

The only criticism I would offer is that at times they forgot basic stage craft; I would encourage them in future to remember their diction, listen to each other in harmonies as the tune was sometimes lost, and remember the audience’s sightlines – there were occasions where we could see the actors offstage.

Special mentions must go to the technicians Jonny Browning and Alice Malone for their improvised tech – it never detracted from what the actors were doing onstage, but added a lot of humour, including, at one point, surprising the actors with the Soviet National Anthem and a stark red background. To see even the actors struggling to keep straight faces was hilarious; indeed, their breaking character or crossing the fourth wall often added far more in humour than it detracted.

Final praise is reserved for Rhys Rodrigues; his first outing as DIM pianist was a triumph. The musical tone for each song was incredibly varied, and let the actors show off their full ranges. Though there were hesitant moments where he seemed unsure whether to play or not, or perhaps missed a hint from an actor, I have full confidence that, given some rehearsal time with the troupe and more performances for them to find their feet together, this problem will cease to exist.

DIM proved that, armed with good suggestions, they are one of the most exciting groups to watch perform. This was certainly one of their best shows I have seen, and the old troupe can leave knowing that they are leaving their society in clearly very capable hands.

The TDTC Showcase, ‘Miscast’, showed actors singing songs they wouldn’t otherwise, usually from characters of the opposite gender. Performances of this nature have become hugely popular in recent years (just Youtube ‘Twisted Broadway’) so it was nice to see it finally arrive in Durham. Overall, it was thoroughly enjoyable, but the production was held back by notable inconsistencies possibly through the lack of a clear creative vision or the limited rehearsal time available to them.

The strongest element by far was the music. It showcased some really wonderful voices and the show included several original arrangements of well-known songs by Becky Brookes. At times the band felt a bit sparse – for instance the strings were clearly lacking in the instrumental section of “Why God Why?”, and this is something I would suggest to take into consideration for future shows. However, all in all, they did a really good job.

The acapella opening to the show with ‘Circle of Life’ was gorgeous, but the musical highlight was undoubtedly Brookes’s Gospel-style arrangement of ‘Climb Every Mountain’ – wonderful harmonies and a stunning wall of sound from the singers.

Vocally, there were some stand-out performances. Meriel Killeen has a beautiful voice, and performed some seriously impressive riffs in the closing number. Likewise, the duet between Sadie Fitch Kempner and Rosie Weston, ‘Lily’s Eyes’ was near-perfect. They were completely comfortable on stage and effortless to watch; not competing with each other, their voices worked together to bring the best out of the song.

This is something on which I would advise other performers to take note for future endeavours. When the big group numbers were done right, they were incredible: the harmonies in ‘The Bitch of Living’, ‘Climb Every Mountain’ and ‘The Colour Purple’ are prime examples. However, in others, more blending was required; it seemed a competition for volume and at some points vocals became shouty, most notably in ‘Omigod You Guys’. While the technicians Alice Malone and Emily Hicks should be commended for dealing so well with this, and the common problem of hearing the singers over the band, changes in microphone volume mid-song were, at times, audible (yet still completely necessary). For future shows I would encourage the singers to pay special attention to projecting and blending their voices without simply relying on the microphones.

Technicians deserves another mention for the stunning lighting design, simple but effective. The silhouettes against the coloured backlight were particularly striking, and I loved the use of the glitterball in ‘Dreamgirls’ – wholly apt.

The most entertaining numbers in the show were those that stayed true to their original intentions, regardless of the supposed ‘unsuitability’ of the actor for the role. Ellie Jones’s rendition of ‘Why God Why’, a song that suited her voice really nicely, was acted impeccably and was truly touching. Saroja Lily Ratnavel as Action in ‘Gee, Officer Krupke’ wasn’t out of place at all; similarly neither were Luke Blacklock or Tom Harper in their solos (‘Dreamgirls’ and ‘Not Getting Married Today’ respectively). Harper deserved special mention for his diction with some lightning-fast lyrics (I didn’t understand how he found time to breathe!) and wonderful characterisation. This is something Blacklock and Harper had in common, their ability to portray exaggerated characters but characters that still rang with truth.

However, even the best-acted numbers lacked their own story arc, and I felt some pieces could have been characterised better. The parody of ‘Omigod You Guys’ was fantastic within that song, but had a tendency to spill over into other male-to-female numbers; on the other hand, I felt ‘The Bitch of Living’, wherein a group of boys lament their lack of success with teenage girls, was too confidently sexualised in its movement, but could have been taken even further with the madness of the number to fully portray the characters’ frustration.

Much of the choreography by Rhiannon Hill was snappy and effective, adding a lot to the show. However, across all the numbers a great amount was clearly recognisable as having come from the Broadway or film versions of the songs. While the inclusion of choreographic motifs is important (indeed, the Broadway opening to All That Jazz is iconic), it would have been nice to see more of her own, original choreography, perhaps better suited to the mixed ability of those performing it.

The biggest problem of the showcase overall was that some performers seemed under-rehearsed. There were numerous instances where it was clear to the audience that an actor didn’t know what they were doing, having to watch the conductor or each other on stage. Unfortunately, this completely disengaged the audience from immersing ourselves in the performance, and at times left me feeling unnerved, hoping the actors wouldn’t get it wrong. Climb Every Mountain was vocally a stunning performance, but Elliot Mather rarely looked away from Brookes’s conducting. This was worse in dances; they were peppered with mistakes and laughter or acknowledgements to the audience when it went wrong. This distracted us from the solo vocalists, taking the attention off them, and hugely detracted from otherwise perfect numbers. It quite simply didn’t do Will Emery’s Velma Kelly justice: had it been him alone, this number would have been the stand-out of the night, and one worthy of a professional stage.

Perhaps given a few more days of rehearsals, these problems will have been resolved. Having said that, when all the performers fully committed to what they were doing, their performances were outstanding. As both individuals and as a group, they are a hugely talented bunch with buckets of potential, and it is definitely worth seeking out any future performances of theirs.