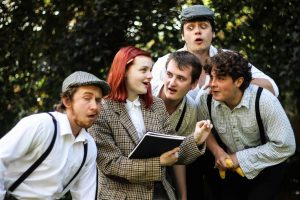 A’ highlight of this term’s dramatic calendar’

Castle Theatre Company’s Summer Shakespeare serves as a highlight of this term’s dramatic calendar, and, on the whole, Tom Harper’s A Midsummer Night’s Dream can be considered a success. With a cast full of illustrious names and an idyllic setting, the audience sat down for a promising afternoon of light-hearted Shakespeare. While entertaining and humorous throughout, I must caveat my praise with the note this did not feel a fully polished piece, and clumsiness in parts detracted from its success as a whole.

The Fellow’s Garden provided a beautiful and scenic space for the performance, and cast meandered around cheerfully in character setting the tone well for levity and comedy. A large stage space was set out and filled well by the cast for the most part, however the benefits of the excellent space come with limitations to match; actors generally coped well with the openness of the space, but those with voices in a higher register should be careful to project, especially when in more intimate exchanges with other characters.

Dan Hodgkinson as Egeus set the tone well with good energy and characterisation as the play began, matched by the vivacity of Theo Holt-Bailey’s Lysander, a standout among a capable set of lovers. However, the ball was soon dropped and left to slumber on the grass of the Fellow’s Garden for several of the opening scenes, as a few characters took their time to grow into their strides. Steph Sarratt’s Titania provided great command of the space, and her accompanying fairies were cleverly used by Harper to allow himself more texture and diversity to an otherwise nearly fixtureless set. Annie Davison grew into her portrayal as Puck, revelling in the carnage she caused on stage, but one felt that Adam Simpson could have done more to match her energy in their scenes together. 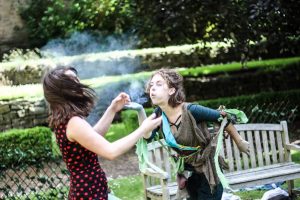 The use of coloured powder was a nice visual touch, and the lovers grew into their own as it began to be thrown around. The brief twist to have Demetrius fall for Lysander momentarily was a commendable directorial decision, stacking laugh upon laugh, and this was one of the most energetic scenes of the play. Dialogue was sharper here than elsewhere, and this wonderfully executed comic sequence was a highlight.

Mike Bedigan’s Bottom, foiled excellently by Bróccán Tyzack-Carlin and Hamish Lloyd Barnes, served well to energise the Mechanicals scenes, and while at times hilarious, especially within the closing play-within-the-play, the group as a whole felt a little separated from the rest of the story. This is, of course, a flaw within the structure of the script as much as anything else (I know, mea culpa), but at times the comedy risked bordering on the self-indulgent, and pace suffered as a result.

All in all, pace and energy came in waves in this production and while other moments dragged. Energy felt by an actor in a large open space such as this is one thing, but conveying it to the audience in such a venue is another, and requires great concentration to keep it from dropping. I don’t mean to say that the play felt too long – quite the contrary. The cast are talented, and a pleasure to watch on stage, and though I risk contradicting myself, do well to energise their scenes as individuals. Yet, split as this play is among so many sizeable roles, these seemed yet to form a completely smooth whole. I suppose this might best be phrased in that it felt very much like a series of individuals playing their own parts, often performing in and of themselves, and less as a harmonious piece. Indeed, while for the most part each individual or group was strong in their own way, elements of the piece lacked a sharpness and chemistry that one might have hoped for from this company, and these elements took something away from the show as a whole.

That is not to say that Midsummer was unenjoyable – far from it – often the company delivered wit and humour that had the audience in stitches. What I mean to say is that there is a sense of potential beyond that which was delivered. It is perhaps unfair to say that I wanted a sharper production, but that is essentially what my feeling boils down to. Castle Theatre Company’s Summer Tour is held to an exceptionally high standard, and with just cause: this is arguably the strongest cast one could have assembled, and I have no doubts that they will sharpen up as their tour progresses.

Yet, in conclusion, it is not quite there yet. This was, of course, an entertaining show. The troupe were funny and milked the audience for laughs, but with the quality present in the cast and crew I don’t feel amiss in challenging them to improve and progress. Indeed, I would rather this come across as a challenge than a simplistic criticism: dialogue can be tightened, energy sustained and projection improved, and most critically I think a chemistry should be strived for that would serve to crown a production that should aspire to the exceptional.