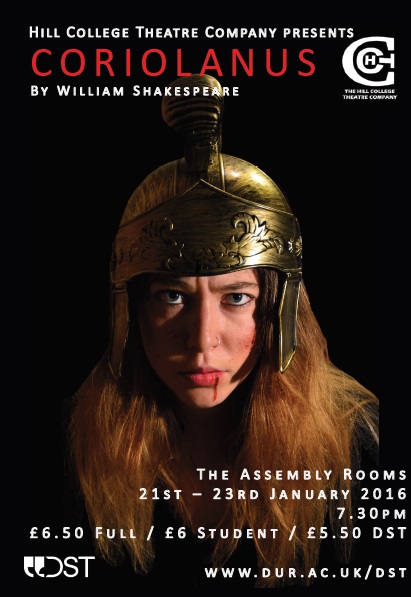 Having never attended a Hill College Theatre Company production, I was intrigued to see how directors Beth Beaden and Ollie Tallis would tackle William Shakespeare’s highly political and – in all honesty – very challenging piece, Coriolanus. Unfortunately, despite the production showing much potential, on this occasion I left the theatre somewhat underwhelmed.

There was a lot to be taken from the play that was positive. Jake Goldman (Menenius) and Wilf Wort (Volumina) were very comfortable on stage and it was very pleasant to see both of them successfully play characters that were remarkably different from their previous offerings in DST. Goldman’s physicality and voice were maximized to their full potential in order to portray a considerably challenging role. Wort convincingly expressed the menace of Volumina, as he offered the most depth of character in the cast. Although both he and Goldman relied too heavily on using volume to express emotion at times, they were undeniably the stand out performances in the cast.

It was great to see yet another gender blind cast in Durham, and it was not a problematic decision, unlike the overall atmosphere that was created. The play was actually cut to an appropriate length yet felt much longer. There was a clear lack of energy, and it was difficult to invest in the outcome of the plot. Susannah Slevin (Coriolanus) seemed to express every line in a very similar tone with almost the same level of conviction throughout the play. If this was to convey the stubbornness of this inflexible warrior, then it was a poor choice as it resulted in a rather flat, repetitive performance. Understanding her character’s motivations was also very difficult given the unclear portrayal. To her credit, Slevin did seem confident as an actor. With more directorial attention in terms of characterization and delivery, she would have been more effective in the role.

With regards to the rest of the cast, there were some weak performances but no bad actors among the group. With direction on that was more focused on characterization, the performances would have taken the play in a completely new direction. Becky Wilson was enjoyable to watch as she was varied in her delivery of lines and seemed genuinely content on stage. This could easily have been the case for the rest of the cast.

The number of fight scenes prevented consistent use of blood (unless The Assembly Rooms Theatre were to be transformed into the blood stricken set of The Lieutenant of Inishmore) and in this case, it would not have benefited the set as Beadan and Tallis aimed to be as minimalistic as possible. Thus, pulling out the stage blood just before the death of Martius (Coriolanus) was very effective as it provoked a sense of climax and superiority for the death of the titular character, something notable in a play consisting of so many battles. Furthermore, in places lighting was used to great effect. The red lights cast upon the characters at the end evoked a sense of guilt for those responsible for Coriolanus’ death. There were, however, consistent lighting mistakes with many scenes being performed partially without lights, and on more than one occasion the stage was accidently left in darkness mid-scene. These were clearly first night errors and will no doubt be rectified.

Indeed, the attention to detail was where the play was at its weakest. The idea of placing many of the fight scenes in the aisles was not a mistake in theory, only in execution. In fairness, this was where the play displayed energy, but the actual choreography had many faults. The fights needed further direction as the physicality was noticeably untidy, and the loud music played at the same time prevented any of the lines from being heard. Cutting either lines or music would have easily prevented this problem. If these scenes received more attention the play itself would be vastly improved, as unfortunately, their effect was more comical than dramatic. What was even more frustrating was the disjointed nature of most of the scenes. Towards the end of the first half the play seemed to gain some momentum, as there were fewer blackouts and scenes were taking place as soon as the previous one had finished. This was far more effective than the long blackouts which fragmented the beginning of the play, making it difficult to follow the plot. This also could have been easily remedied by not having stools on stage during the first quarter. This would add a great deal of fluidity and elevate the energy level to the level where the play would be far more engaging.

I think credit must be given to the cast and production team for taking on such a challenging script, and performing first week of term is never easy by any stretch of the imagination. This was the first DST outing of many involved in this production and I do hope they all continue to work within this society. The potential that existed in the play was evident, and it proved that everybody involved has a lot more to offer, which is a very exciting prospect.