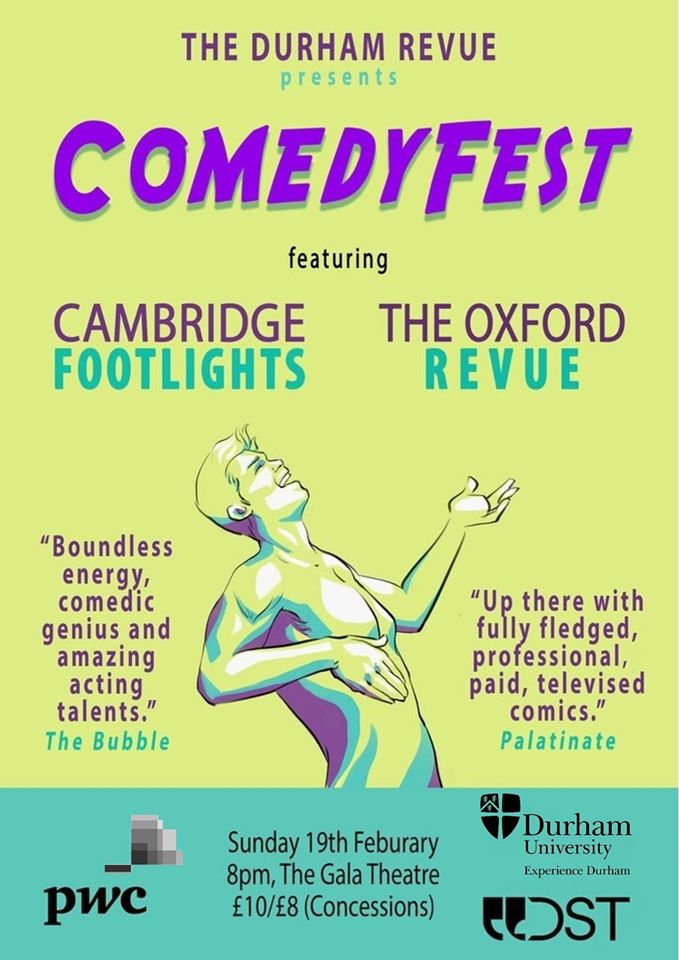 ‘Three comedy troupes walk into the Gala. You can fill in the rest’.

‘Funny’ is an elusive concept at the best of times, so it could be argued that a show built purely around the prospect of delivering comedy in sketch form is a restricting itself from the outset. The expectation that must come with being a comedy troupe can, presumably, weigh heavily at times; indeed, the adage “tell us a joke” must be trotted out whenever the performers mention what they do (as indeed was referenced in the Durham Revue’s opening video), and the audience comes to any show with the anticipation of laughing so hard that they cry.

The process of reviewing is funny in a different sense, and the idea of labelling a subjective thing such a comedy as being good or bad would be an exercise in egotistical opinion-pumping (though perhaps, that is what many reviews may serve to do). That said, I shall pump this review onwards with my opinion that the Durham Revue have put together a portfolio of material that is objectively funny. Personal preferences can limit and restrict some people’s enjoyment of wider forms, and perhaps those that wouldn’t enjoy sketch comedy wouldn’t go to a sketch comedy performance; perhaps they simply haven’t been to the right ones. Last night’s show captured a wide range of laughs, and the Revue achieved this through a well-balanced team the complimented each other’s writing and performing talents delightfully.

Oxford opened the night, and rightly so. If Durham were the headlining act at a Comedy Club, and Cambridge were the entertaining yet nonetheless supporting act (understandably, given the setting of the performance), then the Oxford Revue were the Open Mic section before the Club really opened. Had they been placed anywhere else in the running order, the contrast with the rest of the material on offer would have seemed all the harsher.

However, as they came first, they warmed the audience up gradually, but they lacked the stage presence necessary to truly capture and audience of this size in the venue of this size. The excuse of only having a smaller troupe to work with does not apply here, as Cambridge filled the space comfortably with a three-man outfit. Oxford’s material lacked depth, variety or charisma, and would have become dull were it to have lasted any longer. It says a lot that perhaps the funniest moment in their segment came in Ambika Mod’s cameo. It was humour better suited to a different space and a different audience, that needed work and thought before appearing on the same stage as these other two acts.

A trio from the Cambridge Footlights followed and raised the bar quickly. Their sketches offered good variety in length, tone and subject. Short, punchy sketches with physical gags were balanced well with longer pieces. Some, such as the reading of the Scottish sex guide at the Motorway service station WH Smiths had the audience in stitches with excellent character comedy. The trio also combined well in the sketches in which all three members were involved, such as their Buzzfeed Quiz sketch. Will Hall stood out for me among the Footlights; his timing and stage presence was exceptional, and his Mime sketch has phenomenally funny.

But moving on now to the home team, who, with a larger troupe and more material lit up the second half of the ComedyFest. Driven by well-crafted music paired well to the sketches, the energy never once dropped and there were no weak links. There were also no stand out stars, in a nice way, which is to say that the troupe balanced each other very well and each had their own moments of genius. To list one’s personal preferences as to which sketches were best or most original is somewhat futile, as each had their own wondrous moments. The opening video was an excellent touch, and with their trademark outfits and irresistible charm, the Durham Revue stole the show.

The Revue were cohesive, filled the stage, used the space intelligently and employed the tech possibilities on offer superbly. What really stood out was the range of characterisation from each of them; each had their strengths, and the strength of the whole was how they all complemented each other so fluidly. The occasional sketch could have afforded some slight trimming, or perhaps finished a line or two earlier, in the interest of greater tightness. However, I have no doubts that the Revue are well aware of what they want to do with their material, and how to improve and sharpen their work.

While it must be admitted that this show was on home soil, and was structured to suit the Durham Revue, and they had better access to use the tech, etc. etc., the troupe shone. This is, after all, their show, they headlined the performance, and they were their usual fantastic selves. They were so comfortable on stage, clearly each of them capable actors as well as comics, and filled the space with such a variety and depth of comedy, that I can only commend them on the rare and electric dynamic they have found.

Three comedy troupes walk into the Gala. You can fill in the rest.