Review: A Christmas Cock Up

Tania Chakraborti in Drama on 5 December, 2016. 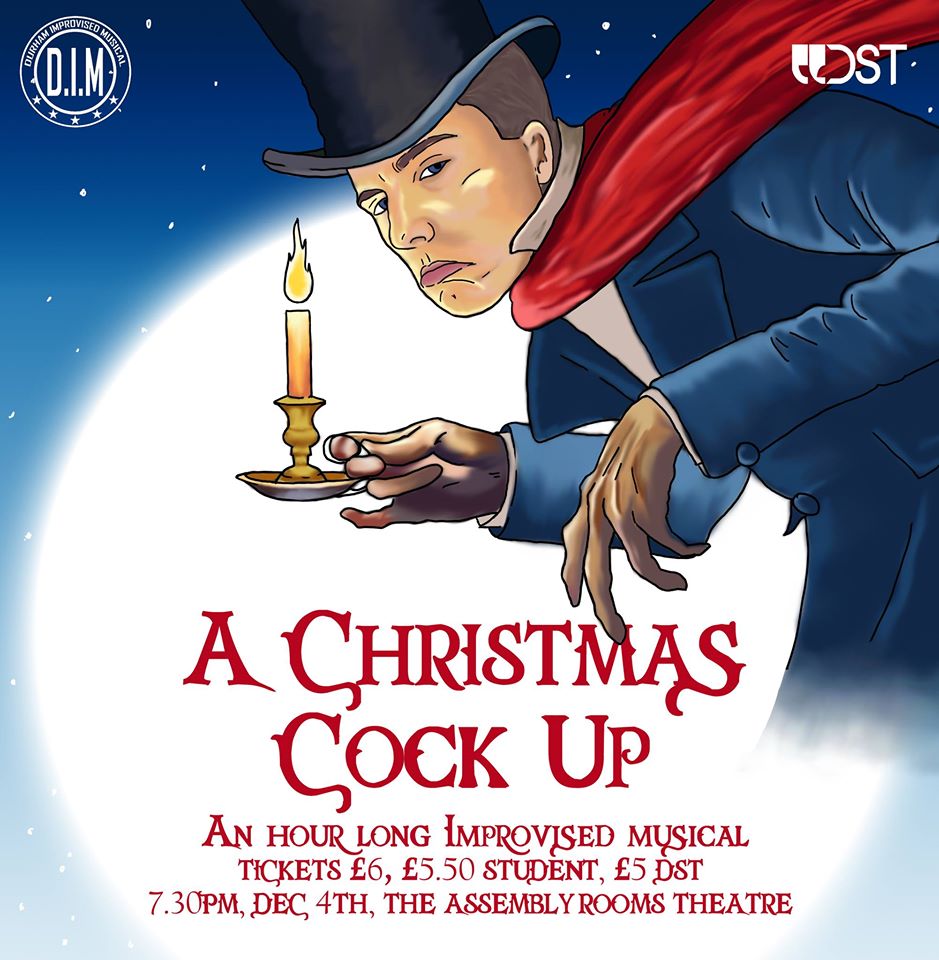 Improvised comedies are always tricky, and improvised comedy musicals? The trickiest. It requires intelligent thinking on behalf of those on stage to sustain humour, momentum and most importantly, plot line. Therefore, upon entering the Assembly Rooms Theatre, I was certainly apprehensive about what I might encounter: this could either be brilliant, or a painful hour of devised theatre. I was sincerely hoping that it would be the opposite of the humorously advertised tag-line on their online promotional video: ‘it might be sh*t, come anyway’. Thankfully however, the ‘Durham Improvised Musical’ troupe managed to artfully craft something that was highly entertaining, dynamic and certainly impressive.

The format of the show required audience suggestions for setting, a song title and a title for the show itself- an aspect of theatre, which can be highly daunting if audience participation is initially lacking. However, this did not stop the ensemble from creating comedy out of awkward silences. The setting chosen was ‘Heathrow Airport at Christmas’, the song title was ‘My Tinsel is Made of Bones’ and the performance name ‘A Christmas Carol Vorderman’. How on earth were they going to achieve this? The mood in The Assembly Rooms reflected the excitement at the prospect of finding out. The troupe’s comedic ‘conferral’ on stage when deciding which suggestions to settle on had the semblance of the comedy moments often seen in old 1940s classics, and such nuances were not lost on the audience. It had all the features of a successful Christmas story: Santa Claus, festive tunes and even a miracle birth (though thankfully, no manger). However, there were many welcome surprises that surpassed any stereotypes. The piece began with Bob, played by Joe McWilliam, reprimanding a man for smoking in the airport lounge. This ordinary man turned out to be Santa Claus, embodied by Charlie Keable, and it was from here that the whacky comedic tone of the performance was set.

Twists and turns then meet the audience at every corner: Santa reveals he is in fact also ‘Satan’s mediator’, who will help Bob reunite with his wife Carol Vorderman (played by Elle Morgan-Williams), if only he sells his soul to Satan. Santa is looking for a new Mrs Claus and finds her in Bob’s mother (Sophie Forster); Carol wants Bob back as she’s four months pregnant and Father Christmas uses ‘Santa magic’ to induce Carol’s birth so that Bob can steal her soul for Satan’s purposes. If this was not enough however, the big reveal comes when Satan (Sam Baumal), dies at the prospect of a ‘Christmas miracle’: Santa explains it was all part of his grand plan to fulfil his Christmas duties and a happy ending ensues. Such a quick thought-out plot was masterfully executed and must be commended, as should the simple yet effective use of two-part staging (floor level and stage), which allowed for slick and creative scene switching.

Let us talk about the onstage troupe itself: each one should be congratulated for giving strong comedic and similarly powerful vocal performances throughout. The stereotypical relationship of lovers separated at Christmas time was perfectly captured with hilarious essence by Finola Southgate and Sam Baumal in their duet. Southgate must be applauded for her ability to slip seamlessly between not just two, but three characterisations, particularly with her hysterical portrayal of the newly-born baby, which had the audience cackling throughout the end scene. Conversely, Sophie Forster’s ability to sustain her character firmly had the audience adamantly believing she was indeed a stubborn mother, set in her ways: she carried the show with her witty one-liners and ability to move the scenes along with moments of pure comedic brilliance. Morgan-Williams had the hardest task: embodying a women beloved and known to all avid ‘Countdown’ fans. Her ability to utilise this to her advantage allowed the audience to breathe sighs of relief, whilst her ‘pregnancy reveal’ ended up being a highlight of the production. However, at times there were moments when she seemed less confident in her improvisation, yet this picked up as the production went on.

There were generally competent performances from all the men in the troupe. Baumal gave a fiercely strong performance throughout and his presentation of Satan as simultaneously sinister and camp was innovative and refreshing, though at certain moments he did display a capability to almost ‘corpse’ mid-scene (stifle laughter on stage) as did McWilliam, which may have detracted from performances at times. Having said this, put simply, McWilliam was thoroughly hilarious with an excellent understanding of comic timing and variation. Nevertheless, at times he should be careful to be louder on stage, as sometimes genius moments were simply lost to the enormity of the room. It must be noted that Keable was the thread that wove the troupe together, bringing out the best in the others. Moments such as when he proclaimed: ‘Santa magic, baby’s coming now!’ ensured the plot reached a decisive conclusion, whilst being at times, excruciatingly funny. Although a minor point, he should be aware that his accent changes between ‘smoking lad’ and ‘confident Santa Claus’ sometimes merged and were hard to follow. In future, if dual accents are being used, clearer distinctions should be made to fit within the context and purpose of the devised scenes.

There were moments that showcased the troupe’s comedic flair: the scene leading up to the song ‘Pret A Manger’, in which Santa professed his feelings for Bob’s mother, highlights Keable’s capacity for astute quick-thinking. Through recounting the death of Mrs Claus at the Christmas party (at the hands of Rudolph), he managed to create a sympathetic layer to his character whilst simultaneously leaving the audience in stitches. In no place was the audience’s uproarious laughter more apparent than when ‘My Tinsel is Made of Bones’ was finally presented, and what a spectacle it was! Alice Malone, Lighting Operator for this performance, displayed her competence during this scene- her creativity with the lighting contributed to the genuinely ominous atmosphere of the moment when Satan was revealed. Malone’s general ability throughout the performance to keep up effortlessly with the dynamic changes on stage was highly impressive. Equally impressive was Alex Bromwich’s performance as pianist: he ensured the smooth running of the show, whilst also exhibiting moments of pure humour, maintaining the tone and energy of the production throughout.

Overall, despite very minor criticisms it must be re-iterated that this was an improvised comedy musical, and for all intents and purposes, DIM achieved everything that was said on the tin. It heightened Christmas cheer and proved that anything is possible in the realm of comedic improvisation: at times it felt as slick as any pre-rehearsed production, in which minute details would have been planned weeks in advance- this troupe had no such luxury, therefore emphasising the sheer impressive nature of the one-hour performance. The audience were roaring with laughter throughout and it was slick and professional, with limited pitfalls. As for the promotional tagline? All I can say is that they should rather promote their next show with ‘it certainly won’t be sh*t, definitely come’, as that is what I strongly urge. Anyone looking for a bit of silly entertainment, catch this talented troupe’s next production: with a strong team, DIM is certainly the comedy troupe to watch this year.