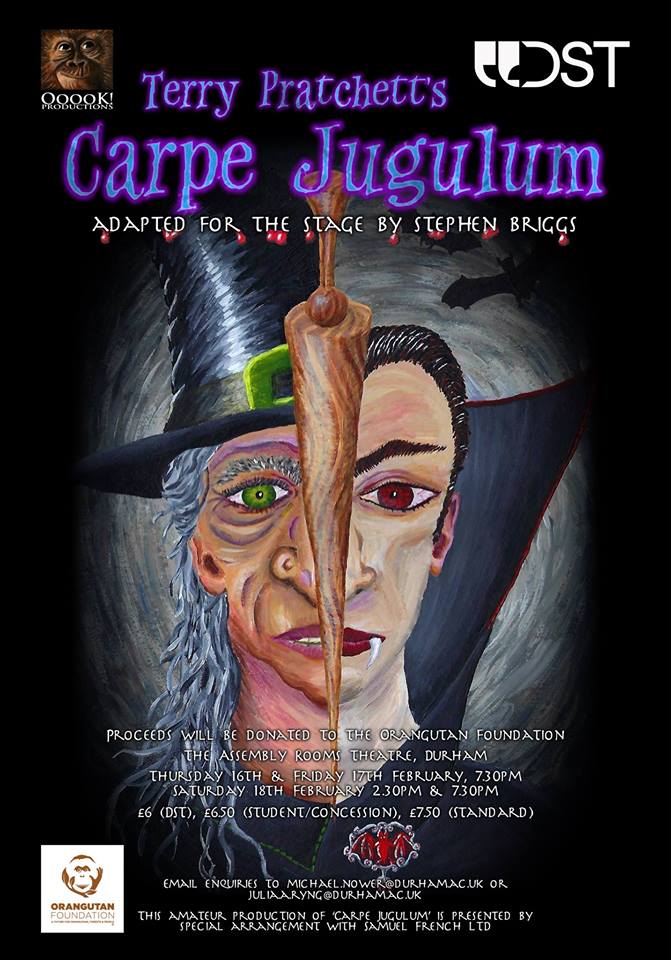 ‘Carpe Jugulum has so many factors deserving the highest praise’

I’m going to resist the temptation to repeat the phrase DOG ON STAGE FLUFFY DOG ON STAGE ad infinitum in this review – not because Ember the dog didn’t do a scene-stealing performance in her debut DST role (I spy D’Oscars on the horizon), but because Ooook!’s production of Carpe Jugulum has so many other (non-fluffy) factors deserving the highest praise.

Carpe Jugulum follows the stalwart Pratchett witches Agnes Nitt, Granny Weatherwax, Magrat and Nanny Ogg as they face off against the Magpyr vampires. Having eschewed the old vampire stereotypes and adopted a more modern modus operandum, the Magpyr’s are a force to be reckoned with. What ensues is a battle of wills as Agnes et al fight off their charismatic foes and attempt to ensure peace, and a vampire-free existence, in the village of Lancre.

Producing a Pratchett adaptation which manages to be both faithful enough to please the die-hard fans, and not so esoteric that it alienates those less literate in Discworld matters (I’m in the latter camp), is a tricky balancing act. Carpe Jugulum is therefore an intelligent choice of script – the fundamental dynamics (vampires bad, witches good, vampires plus witches equals fight) are easily grasped and there is ample opportunity for slapstick, silly caricatures and parody. Co-directors Kitty Briggs and Talor Hanson have done a sterling job in really extrapolating as much humour as possible from the script. I loved the frequent sardonic acknowledgements of the Hammer Horror tropes – Mikey Bicarregui’s appearance as a Vampire not vocally disimilar to the Sesame Street Count was a personal highlight. This sense of fun pervades the whole performance, so that the energy remains almost consistently high (crucial in a play with a running time of nearly three hours). I did feel that pacing became slightly more erratic in the more narrative, explanatory sections of the performance, which was a shame, as I feel that these scenes needed more charisma and energy than their more overtly comic counterparts in order to drive the plot forward, and prevent crucial information from being glossed over. 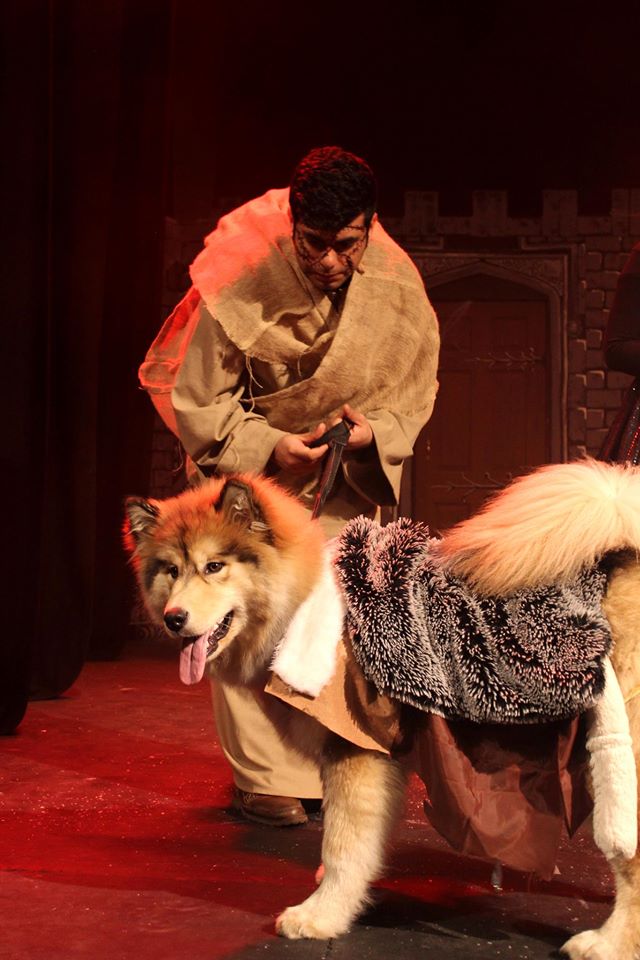 Nevertheless, Carpe Jugulum boasts a consistently high standard of acting from its 35-strong ensemble. Whilst the cast are all clearly enjoying themselves, they never let their enthusiasm become uncontrolled and risk over-playing the comedy – indeed, comic timing from everyone here is spectacular. Particular praise should go to Dan Hodgkinson as a fantastically menacing and sneery Count de Magpyr. Hodgkinson has incredible stage presence and authority and both he and Layla Chowdhury (Agnes) are such natural and unselfconscious performers that they were naturally commanding leads. I also enjoyed Katherine Briggs’ and Harry Twining’s more grounded, quieter performances as Granny Weatherwax and the Reverend Oates respectively. Their relationship created some lovely, more pensive moments amidst the rioutousness – Briggs in particular brought a wonderful tenderness and intensity to her scenes which I found genuinely poignant. And finally, Ben George’s performance as Perdita, Agnes’ alter-ego, was everything I expected it to be – flamboyant, ridiculous and sassy, and absolutely hilarious. It’s a special kind of comedian who can bring the house down simply by nibbling their lip, and I don’t know anyone else who can do it quite like Ben George.

I go to Ooook! productions expecting great things in the aesthetics department and I have never yet been disappointed. Firstly, costume designer Teresa Cherubini has done a fabulous job of kitting out such an eclectic range of characters – I particularly liked the sumptuous vampire’s costumes, suitably suave and sharp-cut. Emily Robinson and Caitlin Anderson’s make-up was also impressive, particularly their prosthetics work. And as always, the set is truly something to behold. Ooook! are very adept at using The Assembly Rooms stage to its full potential and Carpe Jugulum is no exception, with excellent use of the flies and the various available levels throughout. I do feel that more could have been made of the decaying nature of the Vampire’s old castle but I appreciate that under the time constraints of quick scene changes this may not have been possible.

Hanson and Briggs, their production team, and cast, have all worked extremely hard on Carpe Jugulum, and it shows. The resulting production is hilarious and heartfelt, beautifully detailed and with a parade of strong performances. Remaining true to their ethos of creating high quality performances whilst ensuring primarily that everyone involved has a fantastic time, Ooook! should be very proud of themselves. Also there was a big fluffy dog on stage and for that I thank them. Oh so very much.