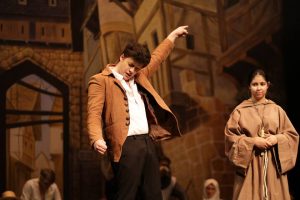 Following the success of DULOG and The Durham Revue’s sell out shows, DST finally made its own Gala mark. This took the form of a theatrical adaptation of Chaucer’s The Canterbury Tales. And director, Talor Hanson, and her team certainly made their mark on both the Gala and on the traditional work itself; with feathers, frolicking and farce, this reimaging of one of Britain’s oldest tales is not one to be missed.

While the production took a little while to warm up, the audience soon relaxed into the tale and enjoyed the vast array of storytelling devices on offer. Ranging from shadow to sock puppetry, choreographed fights to reckless mob attacks and singing to chicken winging, the production was quite simply an artistic spectacle and Hanson should be praised for her strong and imaginative reworking of a text that could easily have been dated and stale.

Yet Hanson did not simply transpose this piece to keep it current, but highlighted the strikingly modern and comical elements of Chaucer’s original writing that appeal to a contemporary audience. Maintaining a traditional aesthetic with an impressive array of period clothing designed by Rebecca Kingston and an equally evocative set design by Jasmine Lo, the production was loyal to its roots. Moreover, the live music and singing was also highly relevant to the period and Emilie Harlow, Mathilde Rouhi, Hannah Ambrose and Phoebe Archbell should be praised for their high quality musical accompaniments that offered scenes greater depth and colour while giving a flavour of the 14th Century background. However, the unpicking of sexual innuendo and debauchery in the text deconstructed the common belief that Chaucer is simply writing about a religious Pilgrimage. Thus, the mistaken frolics of the Reeve’s tale and the visual displays of the characters’ sexual desire are most comedic when set in a time we commonly associate with prudish behaviour. Hanson strikes the balance between new and old perfectly, and this is what makes the production so very watchable.

Of course, the actors should be praised for pulling off this feat. With a cast of 31, it truly is an ensemble piece yet the palpable individuality of each character is a testament to each actor’s performance skills. Particularly, the characterisation of Marcus Dell’s Reeve and Hamish Inglis’ Miller were most engaging, and they each offered a distinct storytelling style that was refreshing in the episodic structure of the play. The caricatures of the tale characters presented these tales with great farce, with Carrie Gaunt, David Fairbairn and Claire Forster giving exceptionally comedic and melodramatic performances. These farcical performances, however, were offset beautifully against Zac Tiplady’s more naturalistic and measured portrayal of Chaucer and Broccan Tyzack-Carlin’s loveable Host. This onstage dynamic was a joy to watch, and it was brilliant to see such a large and talented cast work so well together.

I think it’s safe to say that DST’s first Gala show has been a great success. Hanson and her team have succeeded in creating a rich and diverse production that could not be seen elsewhere in Durham, and I look forward to seeing many more productions of this scale in the Gala in the upcoming years.