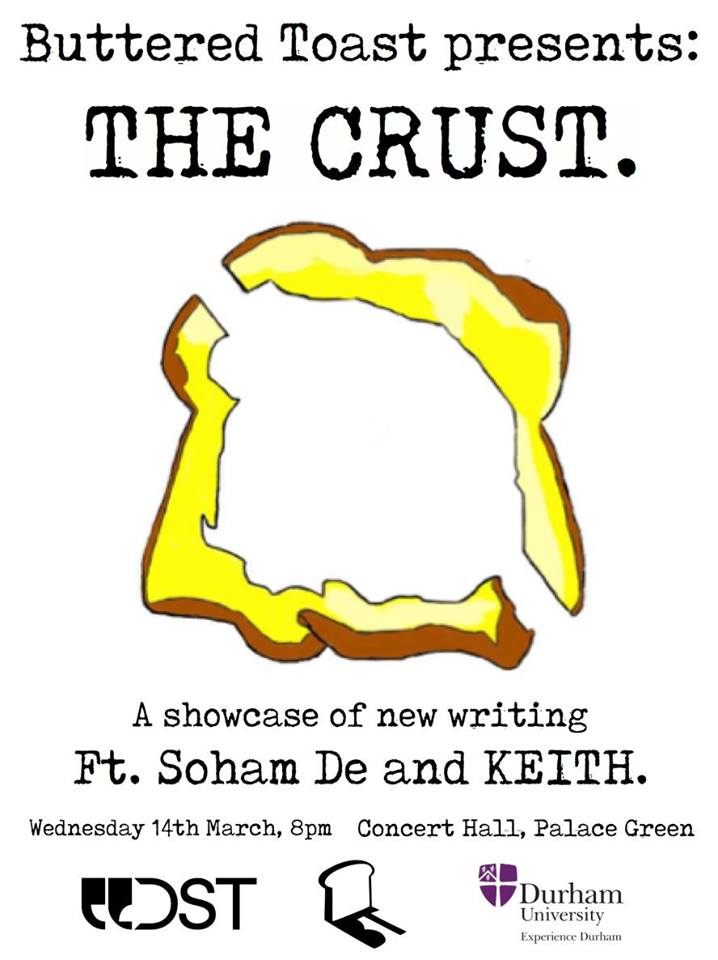 “…a well-executed programme for Durham theatre, music and comedy.”

The night began with two shorts, The Amazon Takeover by Joe Norris and Eric’s Night Out by Fraser Logue, both lively, light-hearted pieces that had a solid cast to move them along. This was especially true of Eric’s Night Out which had an excellent duo, a surrealist combination of a Lady and a eunuch, leading it. In contrast to these comedies was Man Set Apart, also by Fraser Logue, about a totalitarian government that aggressively ignores condemned men, even as they beg for death. This was an experimental, philosophical work with a good set of actors; the hysterical desperation of the Man contrasted well with the reserved emotions of the Official and the bumbling incapability of the Sovereign. It was reminiscent of the tragic regime of the dictator Creon in Sophocles’ tragedy Antigone and I think would prove interesting if it developed along these lines.

This was followed by Minefield by Hamza Adam Rafique, an extended monologue that navigated well the balance between humour and tragedy and was well-written and performed. Yet the piling on of issues and anxieties felt a little gratuitous. The confessional tone of the piece as it opened up the mind of somebody struggling with mental illness was admirable, but it seemed to elicit more detached sympathy than involved empathy.

Next came a musical skit by Danny Booth, a naturally comedic performer with excellent stage presence, timing, and intelligence; this was especially well-demonstrated by his excellent, excellent song ‘I’m Not a Russian Spy’, to rival anything put out by Tim Minchin. This song combined jaunty piano with whip-smart lyrics and a truly brilliant Russian accent with properly rolling ‘R’s; the funniest thing I heard all night. That said, Boothe had fierce competition from his successor, Curling by Alex Rome Griffin a delicate, touching and gentle short, focused on a couple watching the curling at the recent Winter Olympics like a much-improved Gogglebox. The actors had excellent delivery and timing; the comedy was gentle but hit almost every line. It was simple and didn’t try too hard, but rather simply quietly extracted the humour of everyday life.

The next work was a series of skits by comedic ensemble KEITH. The group began with a self-deprecating rap before diving into a series of deeply surreal, highly energetic sketches. Was it humour, was it substance abuse – I’m not sure. The point is, it was very, very funny. The humour was quick, witty and for the most part deadpan; it cracked up both the audience and the cast. It was wildly creative, very sharp-edged, and utterly refreshing.

The night was finished by a performance by singer-songwriter Soham De. This perhaps was a slightly odd turn of events, ending a program of drama and comedy with a delicate and sensitive series of songs, but De did give an excellent performance with a deep and soulful voice that merits listening to again.

Everything in the program was highly enjoyable. Certainly, I enjoyed the level of experimentation, energy and creativity on show and applaud Buttered Toast for their efforts; they provided a well-executed programme for Durham theatre, music and comedy. I very much am excited to see next term’s show, and what they come up with next.