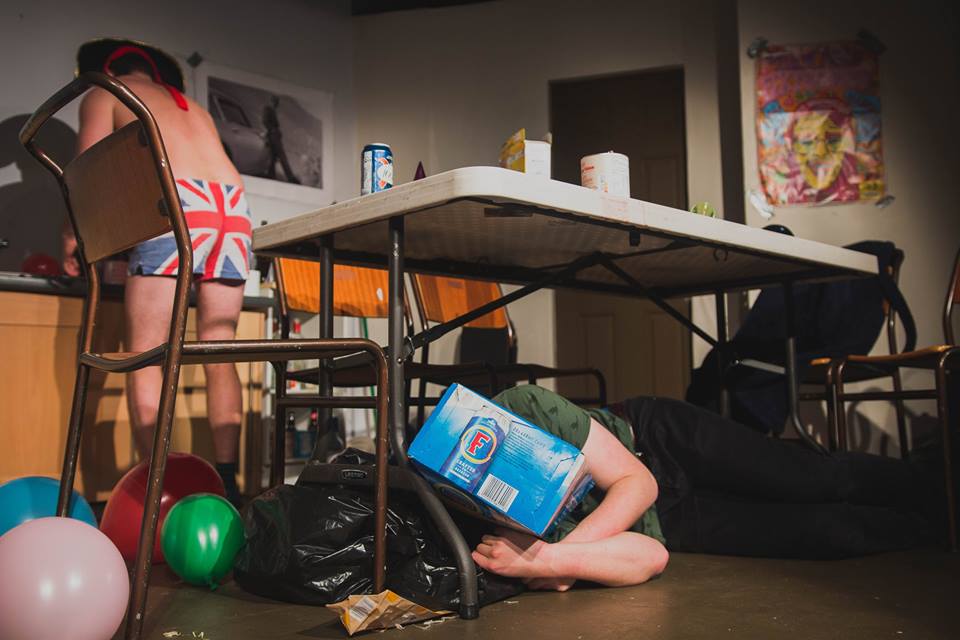 “A thought-provoking and profound play, ‘Boys’ is well worth a watch. “
Photo Credit: Mari-Liis Duglas

Lion Theatre Company’s production of ‘Boys’ is a show that is both hilarious and devastating. Shockingly real, the play delves into the minds of six young people who, afraid to grow up, hide behind alcohol and drugs.

The set itself is remarkably cramped and crowded: a wonderful metaphor for the mental states of the characters. Indeed, the stage is a true reflection of the characters and looks lived in: the array of discarded bottles, the shoes strewn across the floor, even the abandoned dressing gown all help to create an atmosphere which lasted throughout. For this play, the small theatre was a real asset as it felt as if you were in the kitchen with them, as if you were a part of the story. The closeness, and proximity to the actors really drew you into their world. Indeed, it was so close that several things did fall of the stage into the audience at several points; but this only served to add to the comedic value of the play.

The cast of six were incredibly strong and worked well as an ensemble. The boys especially had a real chemistry that made their friendship believable. Indeed, every cast member captured the complexity and supressed emotions of their characters in a way that was captivating to watch. The slower moments of the play were when there were less characters on stage, in these moments the intensity did notably decrease and the characterisation did fall away slightly. However, when the actors were together they really drew from each other, cues were picked up quickly and the drama was pacey in a true representation of conversations between friends. This created what was a well-polished performance that had me laughing but also allowed me to connect and relate to the characters in a genuine way. The play was so much more than crude language and witty comebacks; it was made by its characters and the actors very much pulled it off. I must particularly mention Hamish Lloyd Barnes; his portrayal of the stressed and unhappy Cam was striking and his break-down in Act One was the standout performance of the night.

The naturalistic lighting and simple costumes also very much added to the realistic portrayal of this drama. The music was especially well chosen to accentuate the youth of the characters, but was also used effectively to create climax and to add to the tension of scenes. Occasionally the music started slightly too early and didn’t pause long enough for an impactful line to sink in, and it was sometimes slightly too loud. However, the juxtaposition between the upbeat dance music and the serious themes and arguments was jarring and powerful.

Overall ‘Boys’ was an impressive show that managed to balance humour with an intensity that was shocking and held the attention of its audience throughout. Tackling complex themes such as suicide and growing up was no easy task but Lion Theatre Company pulled it off with what appeared to be remarkable ease. A thought-provoking and profound play, ‘Boys’ is well worth a watch.