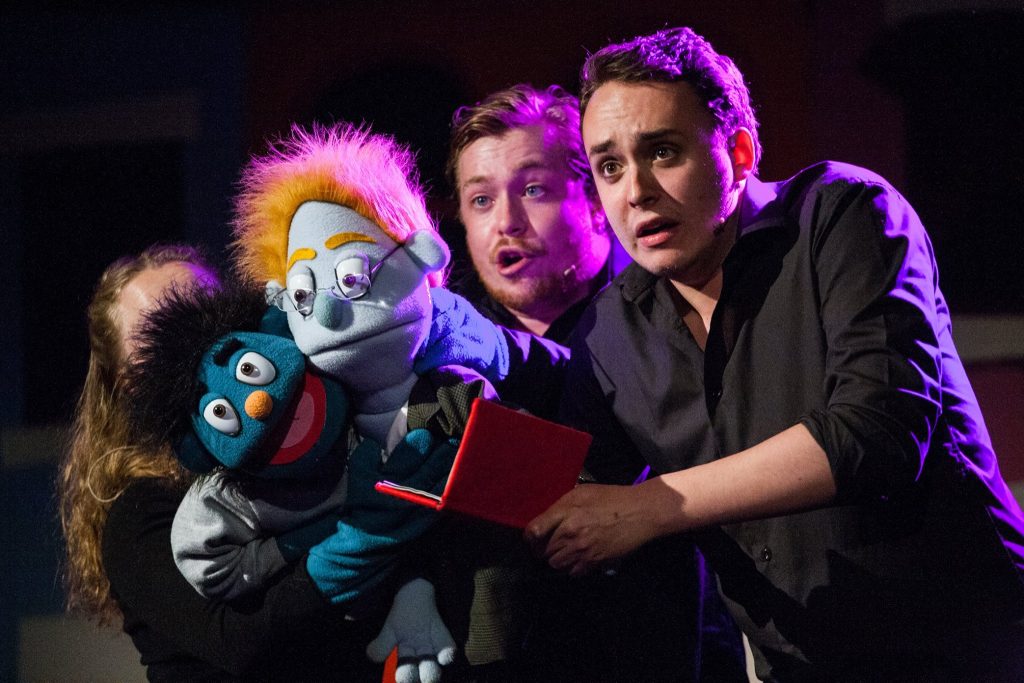 Walking into the Assembly Rooms on Tuesday I wasn’t sure what to expect from DULOG’s production of Avenue Q – puppets and musicals never appealed to me much. However, what I saw was a production which was stunningly executed, well put together and which worked smoothly to explore the issues so relatable to contemporary youths. DULOG put on a shameless performance, overflowing with talent, passion and precision. It was very evident how much time and effort was put into the show, making it entertaining, easy to watch and absolutely hilarious. The actors made the corny jokes embedded in the script seem natural, and worked well with the puppets and the choreography given to them, making the performance flow smoothly from scene to scene. Matt Elliot-Ripley’s musical theatre directorial debut in Durham came in with a bang, and with the help of the producer Tom Mack and a brilliant production team the execution of Avenue Q was next to flawless.

The beauty of Avenue Q is the way that such a fun and seemingly light-hearted performance manages to convey the profound and serious conflicts embedded in modern day society. It deals with issues of race, sexuality, unrequited love and homelessness through humor and catchy songs, and I’m not entirely sure how, but it works wonderfully. Especially relatable was Princeton’s search for ‘Purpose’, and his fears were conveyed very well with the use of lights and music during a short, dreamlike scene. The Bad Idea Bears portrayed by Lilly Edwards and Louise Webster worked amazingly together to embody the dark thoughts and bad ideas that one may so often find themselves thinking. The crude language and shameless sexualization of the puppets added a drop of verisimilitude and humor which allowed the play to convey the heartbreaking issues in a simplified way, enough to make the audience aware of them, however not deeply enough to distress them. Avenue Q perfectly portrays the tragedy of the young and hopeful who are thrown into adult world a little too suddenly.

During the first 5 minutes of the show I was a little concerned about how realistic it would be to fit up to 12 people as well as puppets on The Assembly Room stage. I was a little taken aback and distracted by having to fuse the actors and their puppets into one character, however over a very short period of time, the actors who were given the challenge of carrying puppets managed to entirely embody their roles. To my great surprise, the mix of humans and puppets looked easy on the eye. Sam Baumal gave a solid performance as Princeton, bravely taking on the challenge of playing a relatively neutral character. Jen Bullocks portrayal of Kate the Monster was utterly captivating; she held her character throughout the entire performance and her strong and engaging voice suited the style of the performance perfectly. Another two actors who really stood out were Alex Prescot and Joe McWilliam, whose facial expressions and exaggerated movements added to the flamboyant and whimsical atmosphere of the musical. Overall the cast was brilliant, with no weak links or poor characterizations. The actors worked well with the songs and the choreography given to them and despite a few instances where a few voices were drowned by the music, the musical numbers were clear and strong.

The stage of Avenue Q looked stunning. The scene changes were swift and effortless and small details of the set such as the ‘Komit was here’ graffiti or the drinks menu stand during the night club scene were witty and well thought through. The windows in the main backdrop made room for some great interactions between the characters, really using the space The Assembly Rooms offers by extending the stage upwards. Nothing regarding the set drew attention in a negative manner or felt out of place. Thanks to a great technical team lead by Michael Nower the lights looked exceptional and highlighted the right aspects of the performance at all the right times. There were a few technical glitches with the microphones towards the end of the second act, however most of the performance was technically sound. The brief interaction of the characters with the audience really spiced up the second half of the show. It is great of DULOG to incorporate The Big Issue Foundation into their performance – done just at the right time – to raise money and awareness of the issues of homelessness which surfaces in the play itself.

The plot of Avenue Q is not a linear one, seeing as the storylines of the characters diffuse outwards and interweave with each other. This gives it a twist of realism as no character is overly exceptional or special, yet every single one has a great personality and an engaging story. There was something extremely comforting about watching ordinary characters struggling with ordinary problems, some of which hit really close to home, and in the end finding comfort not in being extraordinary, but in each other and acceptance of the environment they live in. The performance had soul and energy. I left the Assembly Rooms wishing I lived on Avenue Q.