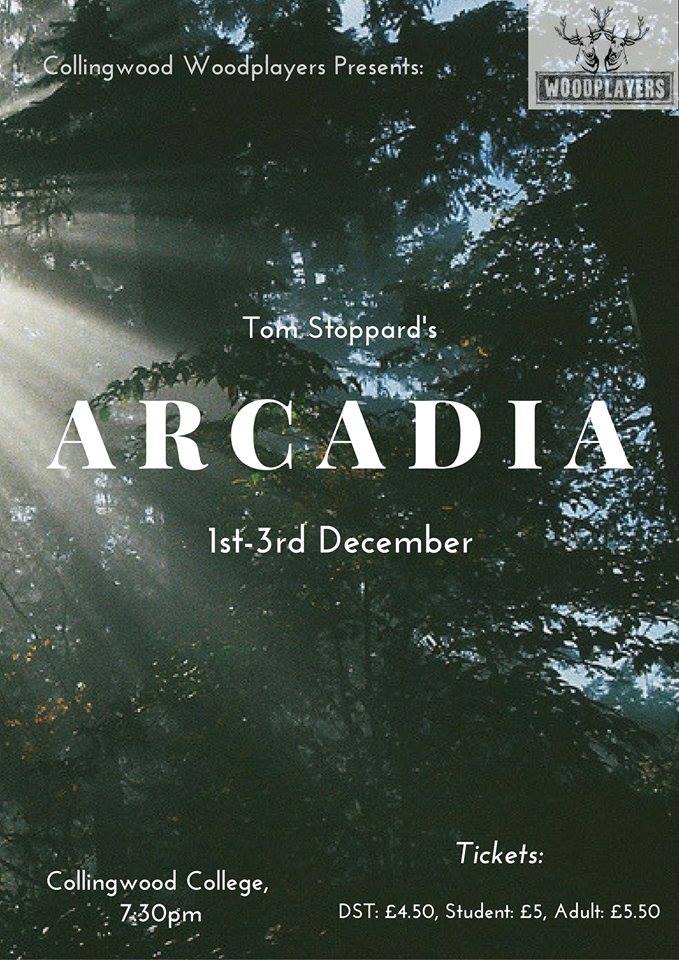 Arcadia is a long and challenging play. This should not, however, deter you from seeing it. Based in Sidley Park, Derbyshire, the play follows two parallel situations, one in 1809 and one in present day. The Collingwood Woodplayers do not shy away from the challenge of this incredibly difficult, intellectual play, and they address the themes well.

From the outset, the set was impressive. It was timeless which, naturally, suited the play well. However, this also meant that at times, it was not particularly fitting for either time period. Other than costume, there was no real differentiation between the two timelines which, in fairness, would be difficult given that they are set in the same location, but I felt like more variation was needed and more attention could have been spent on this. The paintings on the flats were beautiful though and the set was very clean-cut and crisp. The producers must be commended for their attention to detail, particularly with their plans of Sidley Park. Less impressive, however, was the use of a library book. A small cover-up to hide the book marking would be brilliant and solve a very minor issue.

Stoppard writes some incredibly lengthy scenes, and despite some strong performances, at times it was hard for the actors to maintain momentum. Many witty one-liners were occasionally missed or lost on the audience. The cast dealt with this well, although the energy did lag at times; I could not help but feel that some script cutting would not have gone amiss. Some of the secondary characters were slightly weaker and, as a general rule, the cast of the present day had a stronger and more consistent standard of performance. However, Yasmin Jones’ Hannah Jarvis and Jake Lennon’s Bernard complimented each other. Their chemistry was evident from the offset, and with the addition of Nathan Chatelier’s Valentine made for a very naturalistic and easy present-day piece. Lennon, in particular, successfully portrayed an extremely pretentious, pompous Bernard and delivered some excellent one-liners. Similarly, Chatelier must be mentioned again for his brilliant portrayal of an eccentric man and his commitment to interactions with a papier-mâché tortoise. Megan Duffy was terrific at maintaining character as Chloe. Even when not at the focus, she was wholly committed to portraying her character and did a brilliant job, especially in her reactions. However, there were other notable performances. Danny Parker as Septimus Hodge put the audience at ease immediately on his entrance. Confident and comfortable in his role, the audience relaxed as he commanded the stage, easily eliciting laughs. Similarly, Jason Hong’s Jellaby provided light comic relief through his demeanour as well as his physicality. However, I felt that he lacked a sense of subservience that also could have been fitting to the character. It felt untrue to the nature of the character to have such sassiness. Zoe Lawton also provided a good performance as Thomasina, but she should be wary not to overact. She could also afford to have more differentiation between herself at thirteen years old and then again at sixteen years old. This could have been helped through a costume change, but it was unclear that there had been a time leap until it was explicitly mentioned. Lawton and Parker, however, had excellent chemistry, and took the audience through a range of different developments in their relationship with ease.

Generally, the play was static and could have afforded a tad more movement at times, but this is part of the nature of the play. Timing was impressive, particularly in the quicker interactions between the characters and blocking was competent. There were some unexplained erratic escalations to yelling at points. Whilst this was needed at times, there could have been more of a build-up which would have made the play more cohesive. Director, Alice Chambers, must particularly be praised for her overlay of the two time periods. This was very smooth and despite having great potential for being confusing and meaning getting lost on the audience, it was fairly easy to follow both timelines simultaneously.

Costume designer, Poppy Blance, has done an excellent job. The costumes from 1809 were very impressive and juxtaposed nicely with the contemporary scenes. One small note, however, is that Thomasina had modern shoes despite being from the 1809 period, which were also very out of place with the rest of her outfit. However, this is a very minor and pernickety issue and ultimately, did not detract from the fantastic standard of costumes provided.

In and of itself, Arcadia is a perplexing and extremely difficult play. The Woodplayers must be commended for taking on such an ambitious project and made a sterling effort tackling it.