Review: Angels in America Part 1 and 2 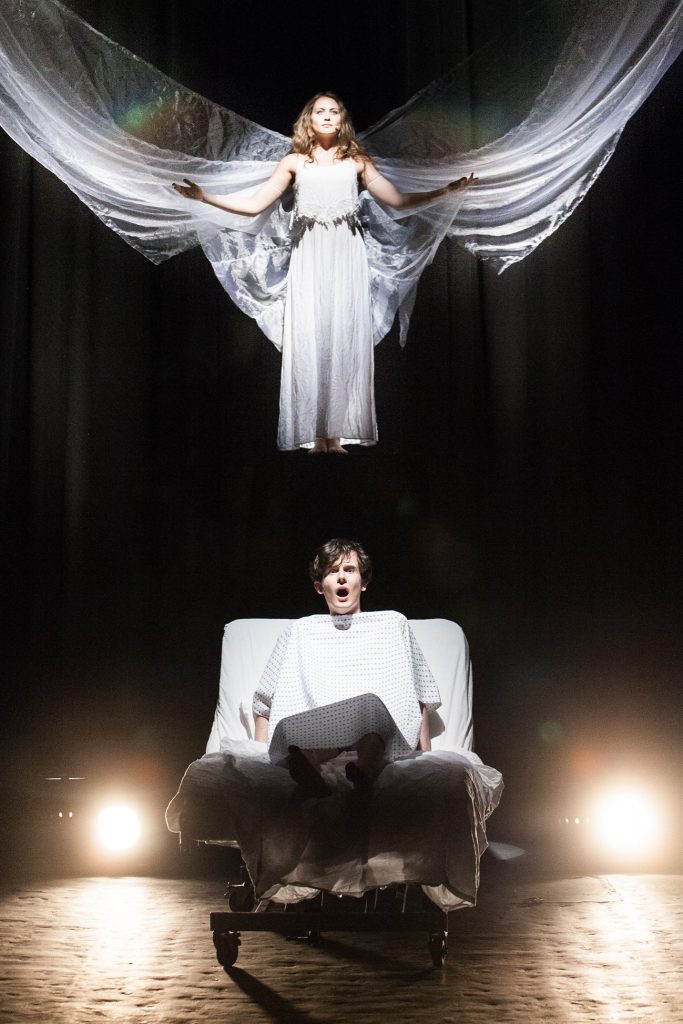 In a play that covers almost every conceivable dimension of theatre, in a production that did it such justice, it seems insultingly cliché to resort to superlatives. Therefore, I apologise for the inadequate reach of my vocabulary; try as I might, I will struggle to do justice.

Angels in America: A Gay Fantasia on National Themes is arguably the most ambitious play of the year, if not in living DST memory, and Pitch Productions and the show’s directors, Tyler Rainford and Nikhil Vyas are clearly deranged. To seriously consider undertaking such a meaty behemoth of a play (well over 250 pages long) is perhaps the single most ludicrous thing to ever be suggested by these two directors, two men who specialise in the ludicrous. Not only is it immense, but the breadth and complexity of the subject matter, still so raw and powerful more than 20 years after writing, is daunting – the demands made on the cast and crew are only rivalled by a handful of plays. The utter disrespect for their own health and sanity is, quite frankly, deplorable. Hence it is such credit to the directors and their team, to the immensity of their spirit, talent and will to write the words: they did it.

To begin with an individual in such a terrifyingly talented group is unjust, but my meaning was validated in the final lines spoken by Andrew Shires, playing Prior Walter. So clear was the emotion bubbling over from within Shires that his eyes watered and his accent slipped for the first time in over six hours of performance. It was clear that the demands of the production had more than taken their toll. Throughout, Shires was electric in an immensely challenging role. From the candid moment of Prior resting his head calmly on his lover’s lap, to his emotional peaks in the fits of disease, Prior was characterised majestically.

Hours of thought and effort had clearly been poured into actors’ relationships with their characters, as Shires final lines showed, and while exceptional, he was one cog in an eight-person ensemble beyond compare. Shires shone in a cast of supernovae: Gaunt, Harrison, Price, Thin – the list goes on. What this cast have achieved is spectacular, not only in their principal characters but in their chemistry between each other, even when doubling or tripling as countless secondary figures. A particular adept at this was Jasmine Price, showing not only great diversity in her range of roles, but seamlessly presented herself as an aging mother as Hannah Pitt in a very minimalist context. Her accent, movement, timing and delivery as Hannah were as close to faultless as a student reviewer dare to venture.

I may risk being accused of looking to stroke the egos of this cast and crew; this I refute fully. Nobody who saw the performance could deny them the praise they deserve for their effort and endeavour. Besides that, however, the execution was also supreme. Sticking to the Brechtian and minimalist staging favoured by Kushner in his own discussion of the work, Pitch’s team of creatives outnumbers the cast, understandable in light of some hugely demanding stage directions. Each member of the offstage team has clearly played their part and take great pride in their accomplishment.

The use of the fly bar to stage Roy Cohn’s many phones in particular was wonderfully imaginative, and the staging swung between bare and minimalist to elaborate and daunting between scenes. Of all moments of technical wizardry, the reveal of The Angel, Sophie Allen, at the end of the first performance was stellar. Ingenious use of lighting to disguise the structure supporting Allen was a masterstroke. Allen was resplendent as The Angel, every bit as dazzling as the lights in a triumph of costume, timing and showmanship.

At other times though, the minimalism of the set was demanding on the actors, and this was generally handled superbly. In a play punctuated with bizarre and psychologically challenging transitions between reality and hallucination, a combination of acting dexterity and diverse lighting and sound served to convey the intended effect. For instance, Qasim Salam’s secondary character of Mr Lies was characterised cleverly by a mix of effects and distinct, supernatural movement and delivery; similarly, the intricate demands of the diorama scene in Perestroika were well-executed with clever use of lights, sound and the Assembly Rooms trapdoor.

And while the performance on the technical side was superb, and they deserve all the praise they get, the spotlight must once again turn to the actors. I have singled out Shires and Price already, but each and every member of the cast could command paragraphs of their own. Staying with Salam, his commitment to the production was visible from the outset in his newly shaven head, but this quickly became a footnote in the gloriously understated physicality of his Belize. As effective as anyone when doubling, Salam stood out in his principal role with a combination of sass, comic timing and passion. While Belize has some on the wittiest lines in the plays, and one of the most powerful speeches in his “I hate America” rhetoric (a speech I would have liked to see Salam milk even more out of), what really stood out was his physical characterisation. Whether it was glowering supremely or drily deriding Roy or Louis, Salam can be proud of his display of how to squeeze the littlest theatrical juices out of his former drag queen.

Roy Cohn was also brilliant. Harrison was magnetic when upright in the first play, utterly commanding the stage. In the second half, when incapacitated with AIDS, Cohn became a picture of dejected fallen capitalism, defiant till his death. At times he was gloriously vile. Harrison’s delivery of his “nice guy” speech was fantastic, while his comic timing in other moments, as well as his facial expressiveness was sublime. Harrison drew all the humour and fear out of one of the least physical roles in the ensemble in the first half, mirrored in the demands of the portrayal of the bedridden and grievously sick Republican in the second.

Then as one of the most confused and internalized characters in a play full of confused characters, Adam Simpson impressed. A closeted gay (sensitive) Mormon Republican lawyer, Simpson was at his most gripping when showing a man whose world is falling apart around him, his parting scene with Carrie Gaunt in Millennium Approaches particularly moving. The tears streaming down Simpson’s pinstripe suit embodied Joe Pitt’s emotional nadir, his face practically contorted in anguish. Though his accent slipped on occasions throughout both halves, his physicality was striking. Especially well-used when doubling in both plays, Simpson should be commended for a performance laced with the subtlety required of a character struggling desperately for identity.

Where Joe Pitt contains so much trouble for so long, his wife Harper bubbles over in Valium-addicted grief. Gaunt was a volcano of emotion, working superbly with her husband in a tableau of a crumbling and confused marriage. Gaunt was another on whom the play had clearly taken its toll, barely containing her tears as Prior read the final lines of the Fantasia. Though the play is often more overtly preoccupied with its male characters, Gaunt’s magnificent characterisation ensured the audience’s sympathy with Harper. At times her delivery was musical, washing wraithlike through the audience in her speeches during her hallucinations. Especially well done for this reviewer were her scenes with Prior, both in hallucination and in the Mormon visitor centre. The way the two played off each other was masterful.

Lastly purely through coincidence, Sandy Thin was excellent as Louis Ironson. The emotional timbre of his delivery was nigh on perfect. His accent never once wavered, although his pacing occasionally frustrated, most notably in his climactic parting with Joe. His combination with Shires throughout the play was superb, and both played well off one another.

I don’t apologise for singling out each individual. There is so much more that could be said about everyone involved, but this review risks becoming as long as the plays this team have undertaken. So many moments stand out from this spectacular production, and Rainford and Vyas can be proud of every man and woman in their brilliant platoon of thesps and creatives. The subject matter of the play is still so relevant as shown by the ongoings in Orlando recently, and the struggle for identity that each of the characters go through is perhaps the most relatable thing that can be realised on stage. I won’t dare attempt to articulate in a review the meaning of a piece of theatre like this. Instead I can only say read it, and spend the rest of your summer in self-flagellation for missing out on Pitch’s marvellous Production.