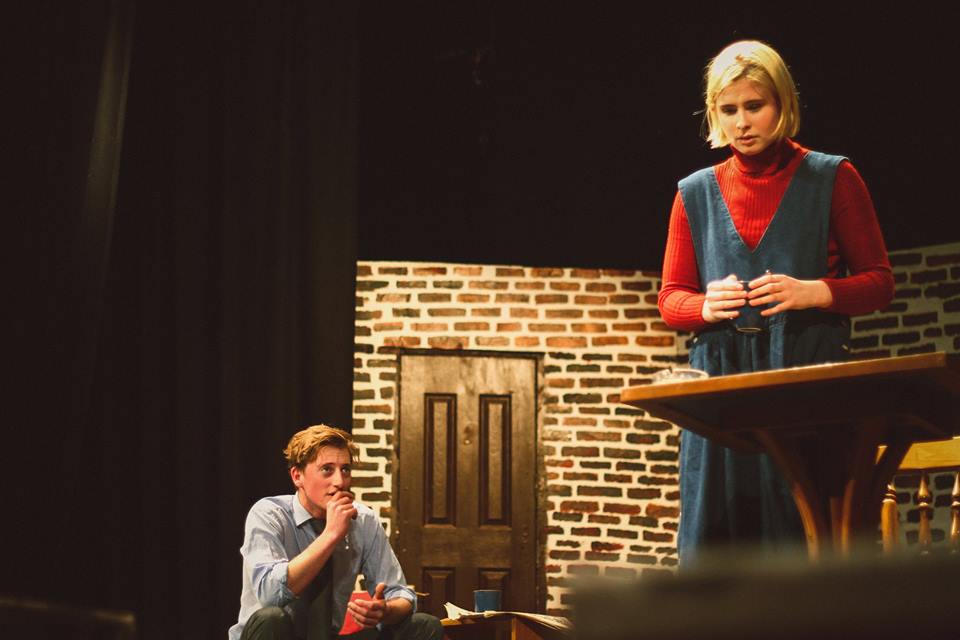 As first term draws to a close, it is time for DST to celebrate the new intake of actors; this year, Alfie was chosen to showcase the talents of the new members. Following the story of one Cockney love-rat, Alfie Elkins (Ned Campbell) through his seemingly unending stream of adulterous affairs, Alfie delves into the unfulfilling objectification of women and explores what marriage really means. Hetty Hodgson and her team should be praised for the efforts in creating an entertaining evening of theatre and it is thoroughly commendable what has been achieved in their first university production.

The play’s opening was gripping, with Campbell emerging from the auditorium with great pride and energy; he portrays the charismatic womaniser with great conviction through his flirtatious relationship with Siddie, played wonderfully by Emily Skelton. Hodgson’s decision to place Skelton offstage for much of this initial interchange was excellent, exposing Alfie’s misogyny and disregard for women. The pace and energy of this scene were thoroughly engaging and I would have liked to have seen this sustained throughout, yet, unfortunately, the pace dropped significantly as the play progressed.

Much of this was due to the nature of the script, however; the frequent structure of duologues and Campbell’s narration became rather repetitive. Campbell’s wavering inflection often become songlike and unconvincing and he should take particular care to express the full meaning of his lines, as many humorous lines were thrown away. Yet I felt Campbell could have been supported by greater movement in his monologues to overcome this issue. Hodgson demonstrated her directorial competence in scenes such as the story of Alfie and Lily’s (Sarah Cameron) affair where the dim lighting and mimed actions refreshed the previously repetitive nature of the monologues and gave a clear depiction of the events that had unfolded. I would have liked to have seen more inventive use of her actors, as this would give the repetitive script a much needed boost. With such a large cast, it seemed wasteful to isolate the production to its duologues, for example, the café and bar scenes would have benefitted significantly from a full stage to create the necessary ambiance.

The set also hindered the pace of the production significantly; with an ambitious, naturalistic design, scene changes often became slow and clumsy. Although subtle touches such as a photo frame in the hospital were appreciated, and the producers and creative team should be praised on sourcing the set, the length of time it took to set the props, unfortunately, impeded the production. This was particularly notable after Campbell delivered an outstanding monologue following the abortion of his child. Arguably the climax of the play, as Alfie shows glimmers of morality and sensitivity, I was consumed in Campbell’s performance, yet my attention immediately faded in the long and awkward scene change that followed. This was a great shame, as Campbell’s performance here was the highlight of the production for me.

Another standout performance was given by Sarah Cameron as Lily; she played the dithering damsel extremely convincingly which only heightened the distress of her agonising abortion. Her short-lived role was both heart-warming and heart-breaking and was a true asset to the production. The cast, as a whole, were strong and all formed good relationships with Campbell. Many of the female characters, however, suffered from the fleeting nature of their romance with Alfie and they appeared very one dimensional. Damson Young as Gilda, however, overcame this difficulty and gave a convincing performance; the progression of her character from subservient mistress to instinctive mother was palpable, as she is the only woman to defy Alfie’s grip. Also, Marcus Dell, as Harry, gave a refreshing performance. His nervous disposition was endearing and contrasted Campbell’s arrogance excellently, and was one of my favourite characters within the play.

Alfie proved a successful play choice for the showcase of new talent in DST, with a cast of 18 and a production team of 20, it was refreshing to see so many talented newcomers to The Assembly Rooms. Unfortunately, the play choice was also its downfall and did not adequately showcase many talented actors as it suffered from an excessive repetition and lack of pace. Yet, Hodgson and her team should be proud of their endeavours, and this year’s production of Alfie has shown that the future of DST is in safe hands.