Review: After The End 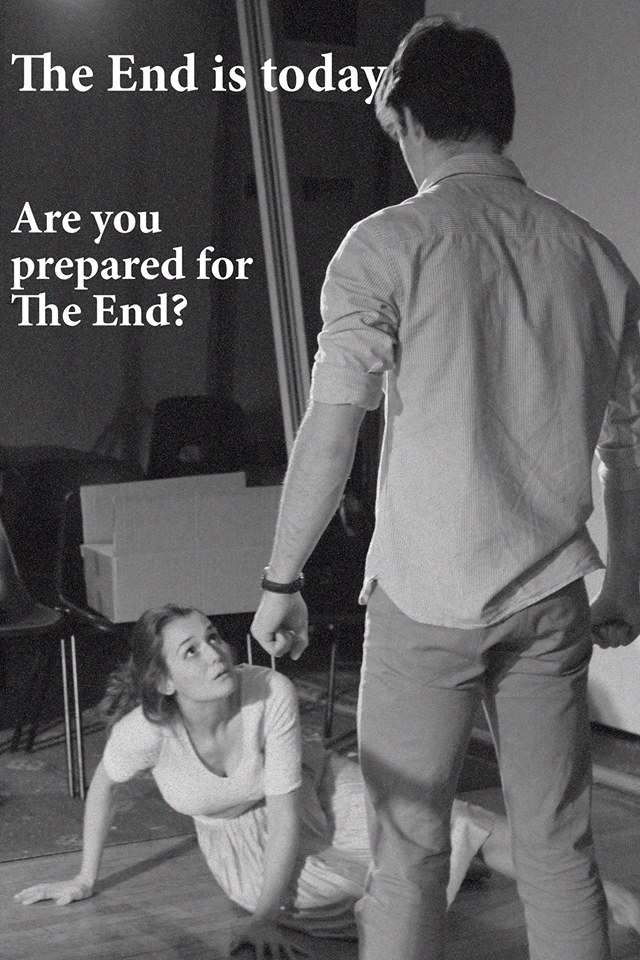 When I read the tagline ‘Are you prepared?’ plastered across 1TC’s stream of production posters, I simply dismissed it as a classic advertisement ploy. However, having experienced what can only be described as the two most emotionally destabilising hours of my life, I now see it was an advisory health warning. Director Kitty Briggs’ take on Dennis Kelly’s post-apocalyptic social experiment, is easily one of the best and most unique plays to have been staged at Durham this term.

But there are plenty of plays that explore the crucial themes of this play, this being the changing nature of relationships and the human condition itself. Yet, there are many elements that make this adaptation inherently individual. Firstly, 1TC and Briggs must be commended for the brilliantly imaginative decision to stage this production in the Three Tuns Hotel, which only served to aid the classic feel of a wartime bunker. There was a timelessness to this production which was jarring: the clothes were somewhat modern day, yet the inserted soundbites sourced from Cold War advisory announcements were distinctly past entities. The technically astute wall projection, outlining the premise of the war, was also an aspect that was simultaneously familiar, whilst decidedly ‘out of time’. It is this alien familiarity, this paradox, which is what made this production so wonderfully unsettling. Briggs’ intention is clear: this apocalyptic, societal self-destruction could happen at any time, at any minute.

Every aspect of the set and staging not only added to the atmosphere of the post-nuclear, but clearly provided a distinct purpose to Briggs’ artistic vision. Thorough attention was paid to every detail: from water bottles to wall posters, even to the skewed hotel partition door, and these specifics were certainly not lost on the audience. The choice to stage Mark’s bunker in-the-round, with no room to hide from the surrounding audience, ensured that this would be a highly raw and emotionally stripped-back performance. On this account, the actors Zac Tiplady (Mark), and Emma Howell (Louise) certainly did not fail to deliver.

To sustain two whole hours of emotionally-loaded dialogue, perfectly execute graphically sexual and violent scenes, whilst retaining the audience’s engaged attention is no easy task: not only did Tiplady and Howell achieve this, but they achieved it to a highly professional standard. Both were a perfectly cast pair who captured the disintegration of a relationship from that of friends to enemies. Tiplady’s degeneration from the realistic and somewhat loveable ‘underdog’, to psychotic, patriarchal and manipulative abuser, was suitably disturbing. Through his portrayal, the audience gauged a twisted understanding of the motivations behind why one would commit heinous, amoral actions against one whom they supposedly love, with jealousy as a key motivator. Simultaneously, Howell’s characterisation of Louise’s collapse from measured individual to primal and vulnerable wretch, whilst exhibiting characteristics somewhat akin to Stockholm syndrome sufferers in the final scenes, was brilliantly accomplished. However, due to Briggs’ sensitive handling of Kelly’s script, the audience is never truly sure: in whose court does the ball truly lie? It continually warps and changes. This is due to the intelligent characterisations and endless use of levels: Briggs and Natasha Bradley (assistant director) ensure very visual reminders of the shifting power play-when Louise is ‘winning’, she is raised above Mark and at other points, the converse is true. The beautifully simplistic use of opposite-facing beds and a table in the centre of the staging (utilised well by the actors), symbolically represent the still ever-present contention and barriers between the sexes in modern society.

Mark and Louise evidently know how to hurt each other, but they are also the only ones who truly know each other, and it is through watching this complex relationship play out on stage that one is brought to fundamentally question everything they know about human experience. Despite undoubted moments of weakness from both actors at times (stumbling over words, Howell’s occasional issues with diction), these moments were shockingly seldom for opening night. I am therefore categorically convinced such fascinatingly executed and highly psychological scenes, could not have been conveyed with as much human reality by any other pair of actors.

Despite this, I was somewhat disappointed, though rarely, by certain aspects of the production. The lighting in particular was a weaker technical aspect of the play. It continued to be harsh and bright throughout, which, though effective in contributing atmospherically, did no favours in the scene where Mark and Louise were meant to be trying to sleep, which realistically required softer, dimmer lighting. Furthermore, certain scenes which opened with mid-sentence dialogue, at times should have been snappier to add to the feeling of in medias res, though admittedly this may have been due to first-night nerves. Importantly, the play was potentially lengthier than it needed to be: the latter prolonged and extended scenes of tension meant that the initial shock, something which made the scenes so artful, was hard to sustain. Such intensity could arguably have been conveyed just as effectively with a shorter production time.

However, these are minor criticisms in what was honestly, an astonishingly innovative and highly memorable first night production. Briggs is certainly the director to watch closely in the future. She, Bradley, Tiplady, Howell, and the entire production team should be commended for creating something so different, which is undoubtedly challenging amongst the increasingly high standards of Durham University productions. If you desire an existential reality check, which will undoubtedly leave you with a highly affecting, but I would argue, necessary aftershock, buy your ticket to this utterly unique production.